Long-term value investors understand that truly profitable trends can take time to build up. Stock market sectors wax and wane with the economy and flow along the curvature of the business cycle, but others don't necessarily obey the same rules.

There's an old saying by Mark Twain, “buy land – it's the one thing they’re not making any more of.” Value investors can take it one step further, though. Arable land is limited, and the global population is growing. That makes food production a critical industry that will continue to be relevant regardless of economic direction.

Low oil prices translate into higher consumer spending which benefits food production companies as well. As a defensive non-cyclical industry, demand stays relatively constant regardless of how the economy is performing.

A rising tide lifts all boats, and the food industry is getting quite a lift lately. Several companies have raised guidance for the next quarter, and a number of analysts have upgraded the industry's outlook going forward.

A Food Production Company With The Right Fundamentals For This Economy

Sanderson Farms Inc. (NASDAQ:SAFM) is a $2 billion food producer and the third largest poultry producer in the US. Plants operating in Mississippi, Louisiana, Texas, North Carolina and Georgia process more than 10.6 million chickens per week.

On average, meat producers have gained more than 13% year-to-date – well above the performance of the S&P 500. Low energy prices have boosted consumer spending, and bottoming commodity prices have helped profit margins.

Sanderson's stock has risen 13.50% year-to-date and more than 30% in the past six months. A quick look at its chart shows how fast the stock has climbed. 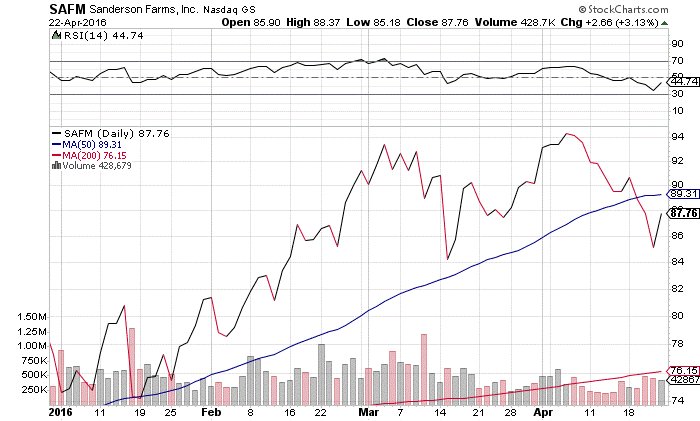 The company beat first-quarter earnings of $0.47 per share compared to the $0.45 expected by Wall Street analysts. It also trades at 12 times earnings – less than half of the industry average of 27. Long-term EPS growth is nearly 16% as well giving it a PEG ratio of less than 1 – a strong bullish indicator.

The company carries very little debt allowing it to react quickly to market opportunities and weather economic hardships. It carries a small dividend yield of 1% giving it some downside protection for investors. The stock trades at less than double its price-to-book ratio as well.

Full year EPS estimates have risen from $6.28 to $6.53 per share putting the stock's fair value at around $95 per share – more than 9% above its current trading range. If next quarter's earnings estimates are revised upwards like last quarters, Sanderson could see even larger gains in both the short term and long term.