OPEC agreed in Algeria to limit future oil production. This represents a major shift in the policy announced in November 2014 to compete for market share through lower prices.

The OPEC communique stated the group will retain output to a "target range of 32.5 to 33.0 million barrels per day" (mmbd). In the latest OPEC Monthly Oil Market Report (MOMR), OPEC reported that production average 33.4 mmbd in September. While that is not far above the target range, there are other problems looming on the horizon; several countries—Nigeria, Iran, Iraq, and Libya—all want to restore their output to levels they were at before their supplies were disrupted, and that could push OPEC’s output up to nearly 35 mmbd if they succeed.

Saudi Energy Minister Khalid Al-Falih reversed KSA’s position from last April when it would not freeze output without Iran’s agreement to do the same. Instead, he said, Iran, Nigeria and Libya would be allowed to produce "at maximum levels that make sense as part of any output limits which could be set as early as the next OPEC meeting in November."

My interpretation is that Saudi Arabia and the smaller Gulf producers are therefore going to have to absorb the cuts if they intend to achieve the target.

A key question is what the impact would be if OPEC’s target is attained. To answer that question, I used the supply-demand assessment from OPEC’s latest MOMR and the Energy Information Administration’s (EIA) Short-Term Energy Outlook (STEO).

OPEC provides world supply-demand numbers that result in a “call” on OPEC oil. It is the difference between world demand and non-OPEC supply. As shown quarterly in the table below, I provide historical as well as expected supply, demand, and stocks, assuming OPEC production at 33 mmbd in 2017. Based on OPEC’s numbers, there would be a seasonal supply-demand balance in 3Q17, but overall, stocks would still rise by about 250 million barrels. In my opinion, this might enable WTI crude futures prices to stabilize around $50 per barrel.

I present a second scenario below, in which OPEC reduces production to 32.5 mmbd. This case would result in small deficits in 3Q17 and 4Q17, and a smaller stock build of around 75 million barrels for the year as a whole. In my opinion, this might enable WTI crude futures prices to stabilize around $55/b.

EIA’s STEO assessment is more favorable for the supply-demand balance and prices. Specifically, the EIA assumes that OPEC production will average 33 mmbd. Under that assumption, OECD commercial oil inventories would build by just 25 million barrels in 2017. In my opinion oil prices would move beyond $55/b but probably remain under $60/b. 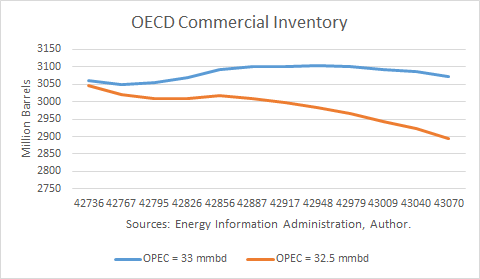 I also calculated a second scenario from the STEO numbers, assuming OPEC production is restricted to 32.5 mmbd. Under that case, OECD commercial stocks drop by about 150 million barrels through 2017, reversing about half of the inventory glut. In my opinion, prices would break through $60/b under this case.

Saudi Arabia has determined that its strategy to battle for market share at lower prices was just too. After two years, it has burnt through about $200 billion of its financial reserves.

Instead, it has decided that it if it sells less oil, it can increase prices and revenues in the short-term. Therefore, I think it will follow through on this strategy.

The risk is that prices rise high enough to enable U.S. shale oil companies to restore their production, which decreases demand for OPEC oil in 2018 and beyond. Because it does not want that to happen to any large degree, it must manage the market carefully throughout the year, cutting back greater or lesser amounts, depending on how world demand and non-OPEC supplies unfold.

I believe that Saudi Arabia would like to try to keep oil prices in the $50s and will manage its output accordingly to stabilize inventories but not allow them to decline meaningfully.