Hello traders everywhere. The stock market got a late morning boost when Bloomberg reported that a China deal may be close. China has offered to go on a six-year buying spree ramping up imports from the U.S., that move would reconfigure the relationship between the world's two largest economies, according to officials familiar with the negotiations.

By increasing goods imports from the U.S. by a combined value of more than $1 trillion over that period, China would seek to reduce its trade surplus, which last year stood at $323 billion, to zero by 2024. The officials asked not to be named as the discussions aren't public.

That news has propelled the major indexes to their highest levels of the week and capping off the fourth straight week of gains. The S&P 500, DOW, and NASDAQ will all post weekly gains of +2.9%. However, they still have some work to do to trigger new green monthly Trade Triangles. 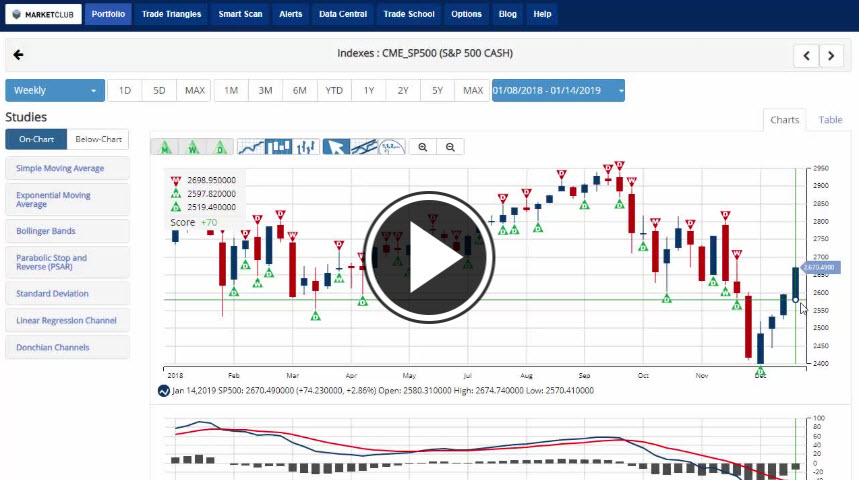 For the first time in four weeks, the U.S. dollar is posting a gain, currently standing at +.74%. The dollar was boosted by news of the China deal, positive manufacturing data showing the biggest gain in ten months, and comments from New York Federal Reserve President John Williams. Williams called for "patience and good judgment" before raising rates, adding he expects "strong" and "healthy" economic growth for this year.

Crude oil rallied about 2% Friday and overall just over 3% on the week, marking the third straight week of gains. Oil jumped higher after OPEC detailed specifics on its production-cut activity to reduce world supply, and on signals of progress in resolving the U.S.-China trade war.

The China news and a strengthing dollar had a negative effect on gold today, pushing the precious metal down -.70% to 1,280.00, the lowest level of the week. That move issued a new red daily Trade Triangle signaling a move to a short-term sidelines position. It will also post the first weekly loss in four weeks.

Bitcoin continues to be lethargic losing -.35% on the week and still hovering just above its 200-week MA.