You don’t have to dig very deep to notice that when people talk about cryptocurrencies and the blockchain, they’re usually talking about Bitcoin (BTC).

In fact, to most people, BTC is synonymous with cryptocurrencies.

This huge popularity makes BTC the big player on the block. And with a recent price of $57,678 and a market capitalization of $1.1 trillion, investors are putting their money where their mouths are. And that’s having a dramatic effect on BTC price.

We’ll get into the nitty-gritty behind the best reasons for just about everyone to own at least a little Bitcoin in a sec.

Bitcoin is a digital currency that lives in a distributed ledger on a place called the blockchain. Because of this digital nature, it doesn’t exist in a physical state, like gold or currency. And because it lives in a distributed ledger system on the blockchain, a vast array of computers track and secure the currency using cryptography. The people that run these computers are paid a fee for securing the network and making sure the transactions are correct by solving complex mathematical problems. These people are called miners and form the backbone of the BTC ecosystem.

Bitcoin was invented in 2008 by a person or group that goes by the name of Satoshi Nakamoto. In the white paper called Bitcoin: A Peer-to-Peer Electronic Cash System Nakamoto outlined the principles behind the first trustless, peer-to-peer, cryptographically secure electronic payment system. No one knows for certain who or whom was or is Nakamoto. There is lots of speculation but lots of lore.

Why should I own Bitcoin?

There are tons of good answers to this question, so let’s take a look at some of the strongest:

One of the best features of cryptocurrencies in general – and Bitcoin in particular – is that financial transactions take place in a trustless ecosystem where transactions are done on a peer-to-peer basis, in the open, without the need of third parties like banks.

For example, right now, when I pay for my dinner at a restaurant, I’m trusting that my bank will execute the transaction properly, that the restaurant’s bank will do the same, that the credit company won’t make a mistake, and that the computer systems backing up all these third parties won’t crash and burn.

Bitcoin Is A Huge Player In The Space

It’s usually a good idea to get behind the biggest player in an investment space, especially when that space is young. That holds true for Bitcoin and cryptocurrencies. Bitcoin’s $1.1 trillion market cap makes it the dominant player. In fact, it’s over 237% bigger than its closest competitor -- #2 Ethereum (ETH) with a $455 billion market cap.

Plus, with a circulating supply of nearly 19 million coins and a daily trading volume of $68 billion, Bitcoin is both plentiful and liquid, two big plusses for price transparency, adoptability, and popularity.

Another plus is that Bitcoin is becoming more mainstream. Just a few years ago, when people beat up on Bitcoin, they pointed to its use in illegal transactions. While that is true of Bitcoin – and any currency for that matter -- today, that objection isn’t heard much, if at all. That’s a sign of broader adoption.

And as we talked about previously, Bitcoin adoption by retail financial transaction vendors like PayPal and Square has elevated Bitcoin’s retail-facing exposure. And with that, more credibility. I can easily see future retail transactions, including the moniker “Powered by Bitcoin.” 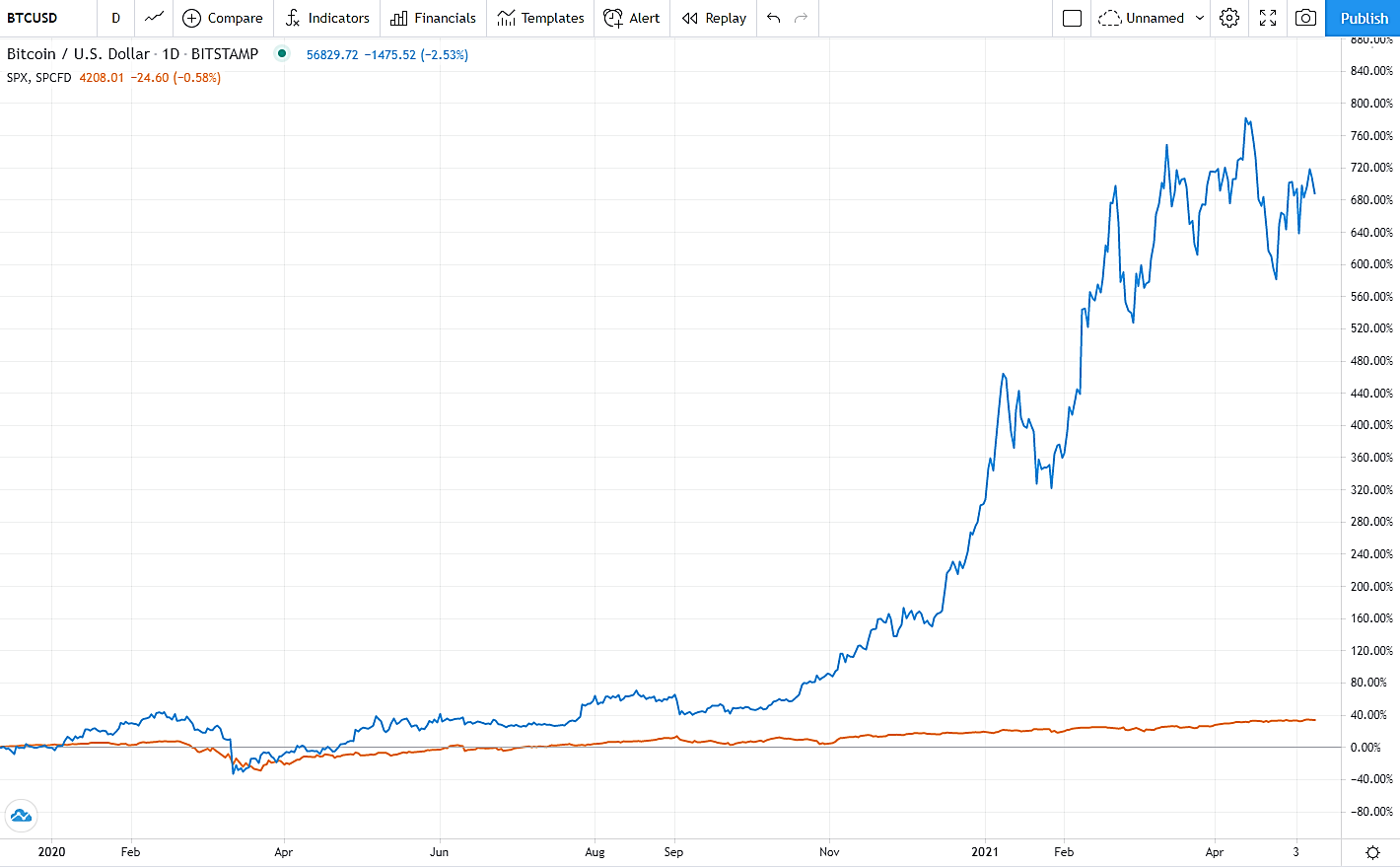 As you can see from this comparative chart of Bitcoin (BTC) and the S&P 500 (a good proxy for the broader stock market), the cryptocurrency is outperforming stocks at a massive rate: From the end of 2019, stocks are up about 30% while BTC is up nearly 700%.

But that’s not all. As you can see from the price action during the beginning of the pandemic in the first quarter of 2020, both stocks and BTC took hits. But BTC managed a solid recovery, showing that it wasn’t just a fly-by-night throw-away asset. And after that recovery, BTC started its parabolic rise.

Everyone Should Own A Little BTC

If you’ve been around investing for a while – or just have a bit of common sense – the above chart shows that BTC has been off to the races. And although the cryptocurrency has made some welcome consolidation lately, there’s no denying that BTC is highly volatile and overextended on a long-term technical basis.

Still, the fundamental reasons I just outlined are good reasons to get involved with Bitcoin (BTC), so the above chart shouldn’t scare you away. It should just temper how much you put into BTC. My guess would be no more than 1% to 2% of your portfolio. That’s enough to have some skin in the game.

But no matter how much you invest, BTC is just like any other highly speculative, volatile asset: You should be comfortable losing some, if not all, of your money. That’s the potential payment this kind of market may require in exchange for a huge upside.

In my next issue, we’ll take a look at another great cryptocurrency that’s got just about everything you’re looking for.

Disclosure: This contributor does own Bitcoin. This article is the opinion of the contributor themselves. The above is a matter of opinion provided for general information purposes only and is not intended as investment advice. This contributor is not receiving compensation (other than from INO.com) for their opinion.

One thought on “Why Everyone Should Own (A Little) Bitcoin”