I tell you, I couldn’t be more excited about our next cryptocurrency.

In fact, Cosmos (ATOM) has some of the coolest features that the crypto world has ever seen.

And if you dig a bit deeper, you’ll discover that Cosmos’s real-world applications mean its price is likely headed much, much higher.

Now, you don’t need to wade through those articles to get your head around this one. But if you like to learn about the nuts and bolts of crypto, those two articles are a good place to start.

What is Cosmos (ATOM)?

Cosmos began back in 2014 when Tendermint - a developer of the project - that was founded by Jae Kwon. In 2016 a white paper followed, and then a token sale was held in 2017.

From the beginning, Cosmos wanted to do things better. Unlike proof-of-work protocols like Bitcoin, Cosmos uses a proof-of-stake platform. With this type of platform, validator nodes (people working on the blockchain) who own more of Cosmos - hence the term “stake” in proof-of-stake - get first dibs on processing transactions and securing the network. This can make the network faster, cheaper, and more environmentally friendly.

But Cosmos goes even further. And that’s better interoperability. Here’s what I mean:

Remember, blockchain technology works by sharing ledgers across a vast array of computers. These computers make sure that transactions are valid and are doing what they’re supposed to do. If they accomplish this, the blockchain is updated and secured with the new transactions. No central authority needs to sign off on transactions or legislate validity. The blockchain itself takes care of this.

Now, while this lack of central authority is one of the great features of the blockchain, it can also cause problems. And one of the biggest of these is the lack of interoperability. In other words, sometimes blockchains have difficulty talking with one another.

Learn how to use options to supersize your portfolio returns with Trader Travis' free training!

That’s where Cosmos comes in. By using a computer system called Inter-Blockchain Communication protocol (IBC), Cosmos makes it easy for different blockchains to communicate, interact, and transact business. And that means by using the IBC protocol, people doing business using Cosmos can manage assets and data better and with no need to worry about blockchain compatibility.

One of the big ways that Cosmos accomplishes this is through modularity. Just like it sounds, with modularity, Cosmos developers can easily build networks by focusing on “chunks” of code. Think of it as a sort of plug-n-play way of coding for the blockchain. This type of modularity means that large, complex blockchain ecosystems built with Cosmos will become much easier to make and maintain.

In addition, blockchains that use Cosmos can not only have better conversations they can also grow at a much greater and more efficient rate. This increased scalability means that developers can grow Cosmos blockchains easier than with other cryptocurrencies.

And finally, the IBC protocol will greatly enhance decentralized finance - called “DeFi” - by making sure that channels of communication get maintained while also ensuring the sovereignty of the different blockchains. We will spend more time on this issue and DeFi down the road. Suffice to say for now that Cosmos is a big plus for decentralized finance.

Just like when we talked about Ethereum (ETH) and Bitcoin (BTC) a few weeks ago, sometimes a picture is worth a thousand words. 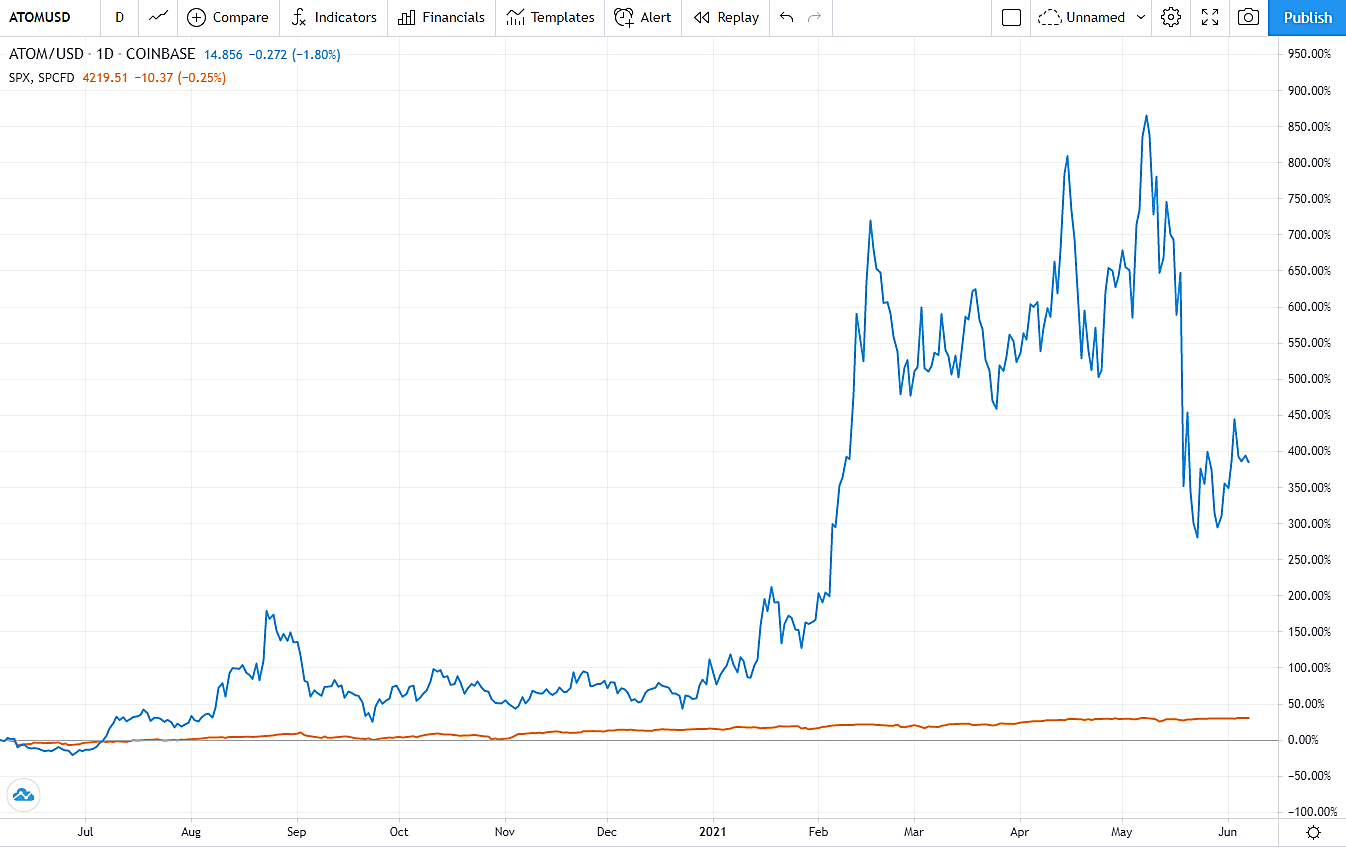 As you can see from this chart of Cosmos and the S&P 500, the cryptocurrency has fared well during the downturn in the stock market. In fact, COSMOS has outperformed stocks over the past year by nearly 10 to 1.

Devote a Little to Cosmos

The above chart also shows that after Cosmos went parabolic earlier this year, the sideways chop has been mind-numbing. And the best thing we can do is to pay attention to it. That kind of chop can be dangerous. So, if you’re going to take a chance on Cosmos, I think doing so in small amounts (1% to 2% of your portfolio) is the best bet. And down the road, I think it will be worth it.

Next Week: Get Out Your Mining Helmets!

I’ve been waiting for next week’s issue for a long time: We’ll do a deep dive into what mining a cryptocurrency is all about. And don’t worry, it won’t be filled with a lot of nerdy jargon. I’ll take apart the mining process and explain one of the most fascinating - and widely misunderstood - features of cryptocurrency.

3 thoughts on “Take A Look At Cosmos Now!”