This week we have a stock market forecast for the week of 11/7/21 from our friend Bo Yoder of the Market Forecasting Academy. Be sure to leave a comment and let us know what you think! 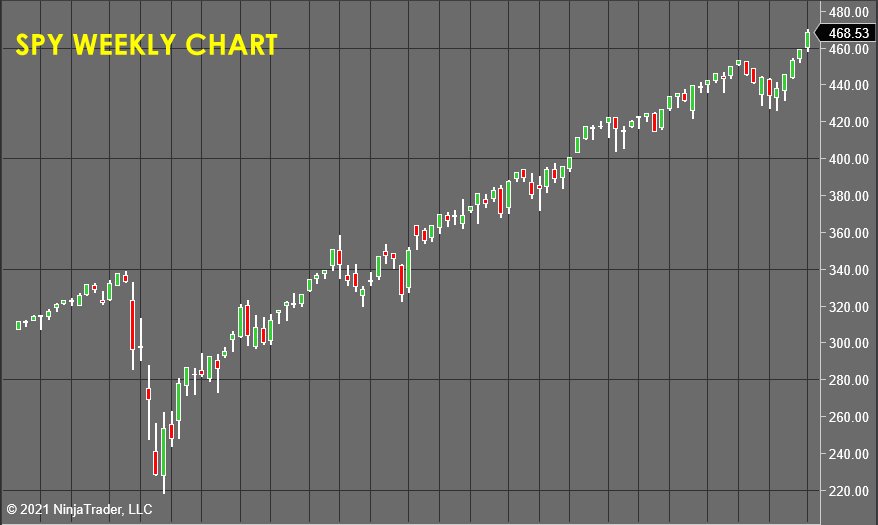 It’s so destructive what the Fed is doing, and their “crystal meth” jacked right into the market's veins had the expected effect. This injection of demand overwhelmed the available supply and we have “doinked” higher.

I can’t analyze and forecast a market with accuracy where politics and policy trump human behavior models and basic supply and demand.

The intraday markets in the S&P remain solid. I had back-to-back winners today and produced double-digit gains.

Less than an hour.

Yet that nice day feels ruined as I do the research for this forecast...

Watching my beautiful S&P get yanked around by the pond scum in our political system is like watching somebody vandalize an art masterpiece. People have no idea of the consequences of all this stimulus.

Or, maybe for the first time in my career they do!

Go buy a nice steak or try to buy a used car and you will begin to understand how fiat currency dilution and inflation work.

If you are so inclined, go read “When Money Dies” by Adam Furgusson...

Read “The Creature From Jekyll Island” by G Edward Griffen

“Confessions Of An Economic Hitman” by John Perkins

“The Fourth Turning” by Strauss and Howe

And, remember this classic from 2010?

It’s an ugly education, but you read these and you will understand CLEARLY what’s happening in our world, what to expect, and the mess it will leave for those of us who know how to survive it. 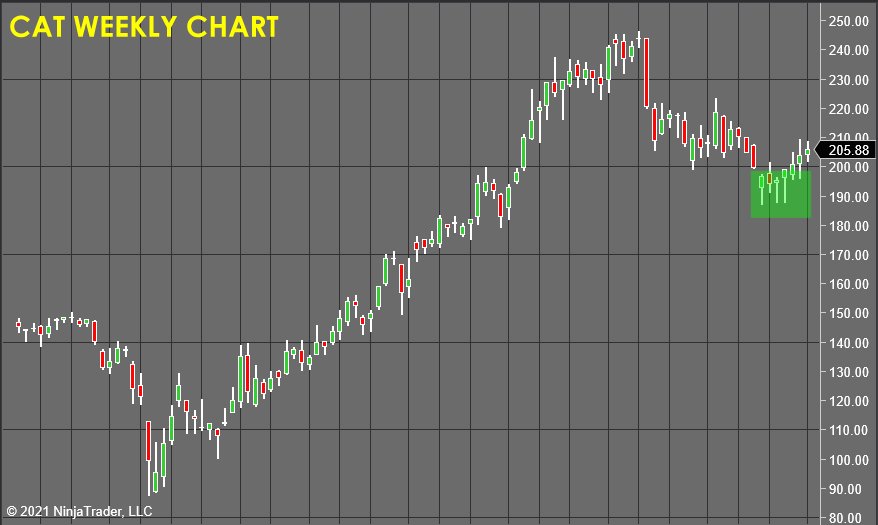 CAT continues to drift higher which isn’t good. The markets had such a “hot” week, and that pressure should have pushed CAT up nicely. This relative weakness is the indication I have been waiting for. Time to scratch this trade for a small profit. 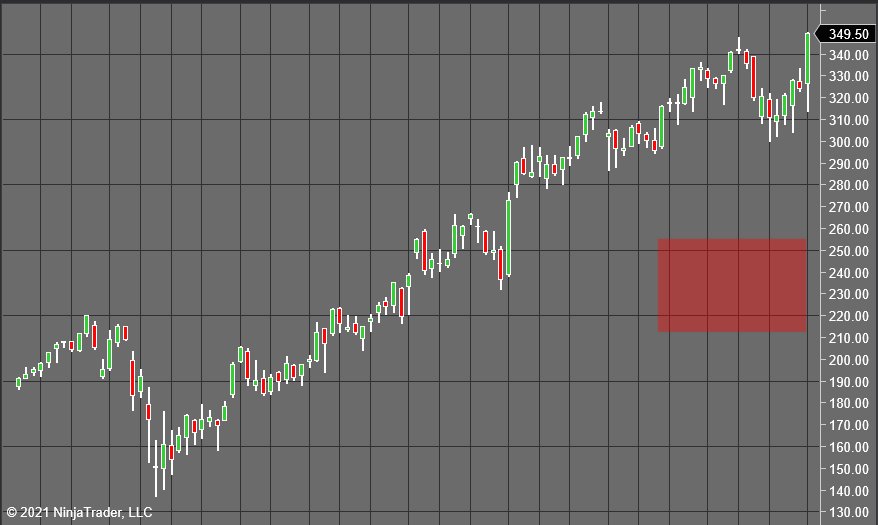 Gold pushed lower early in the week, then the bulls came crashing in and closed the markets at their highs. This bearish rejection is VERY GOOD for this forecast and could be the catalyst I have been waiting patiently for. I’d expect next week to also be a big one for this precious metal market. 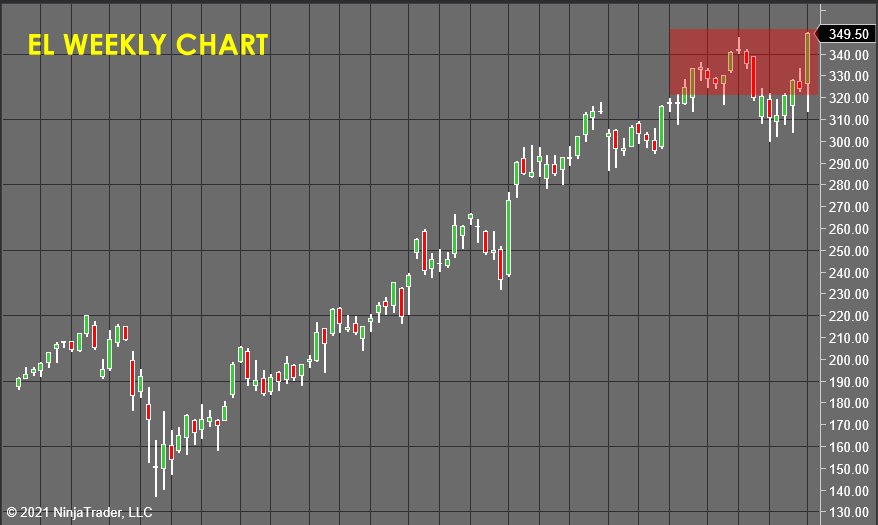 EL produced a violent whipsaw bar just like previously described in GLD. Caught up in the “fed-whip”, this stock closed right near the highs of the red zone and I’d expect to take the loss at the open on Monday. 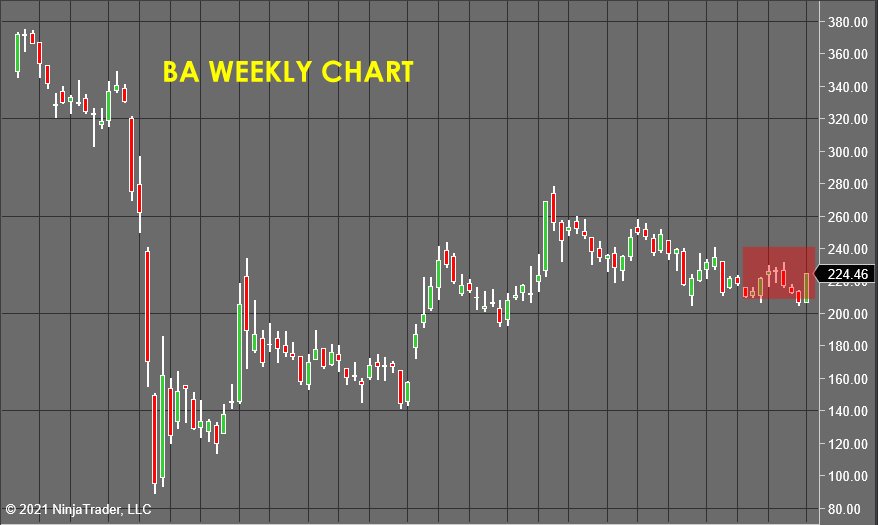 BA went right to the edge, then got caught up in the “current” of the Fed rally and closed with a big green bar on its weekly chart.

This is a kick in the shins to the bears and I expect they will react in pain by withdrawing, rather than counter-attacking. I’d say it’s time to reset and get ready to re-deploy capital. 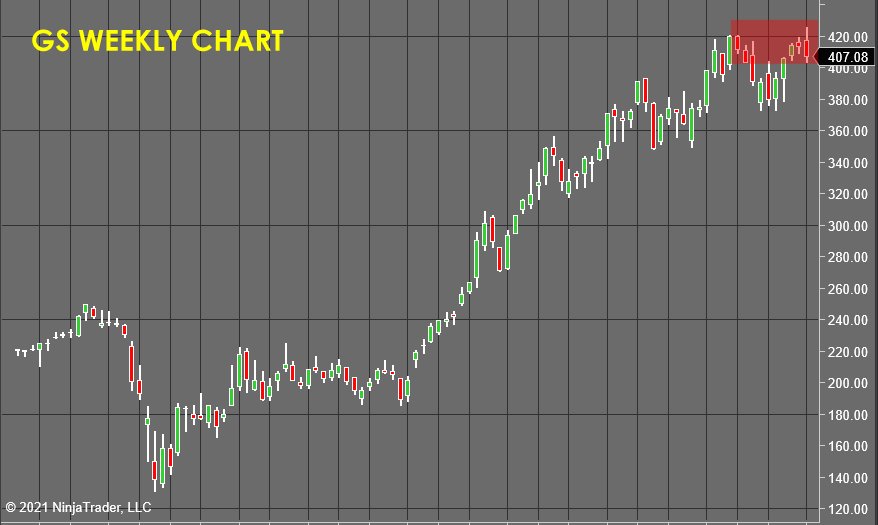 Well, what do you know!

In a Fed stimulated week that blew out most bearish price patterns, somehow Goldman Sachs managed to produce a badly failed breakout (at $420 no less... ironic) and this leaves a clear double top on its weekly chart.

That relative weakness should attract some attention from the bears next week, so this is a perfect place to re-deploy capital this week. Any prices in the red zone would be attractive to me with stop losses set above the highs of that same red zone.

In addition to his two books for McGraw-Hill, Mastering Futures Trading and Optimize Your Trading Edge (translated into German and Japanese), Bo has written articles published in top publications such as TheStreet.com, Technical Analysis of Stocks & Commodities, Trader's, Active Trader Magazine and Forbes to name a few.