By: Josh Sparrow of Street Authority

The name Bill Ackman carries more weight now than it did a year ago.

2014 was a rough year for most hedge fund managers. The average fund returned just 2% and the first six months of the year saw 461 hedge funds close shop.

Yet Ackman's fund, Pershing Square Holdings, returned an astounding 40.4% in 2014 and went from managing around $11.5 billion assets at the start of the year to more than $18 billion currently.

And that success helped make Pershing Square Holdings' (AMS: PSH) recent IPO that much more successful. The firm's October IPO -- which opened on the Euronext Amsterdam exchange -- was one of Europe's largest in 2014, at $2.7 billion.

Investors who bought shares of the company at the time of its IPO have already seen a nice 12.7% gain in just a few months. 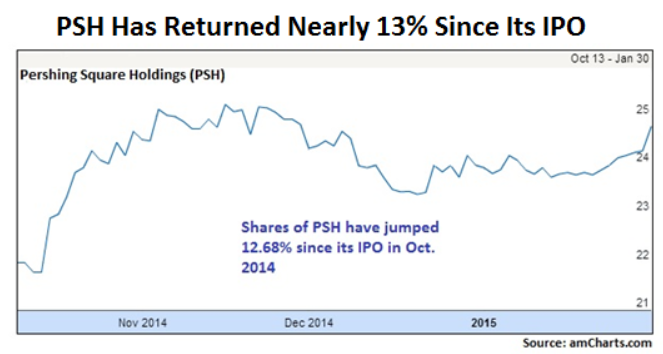 In the company's first letter-to-shareholders, Ackman laid out what he believes to be the company's primary competitive advantages. He wrote, "When compared with other investment holding or operating companies, PSH benefits by its favorable tax structure and long-term track record." END_OF_DOCUMENT_TOKEN_TO_BE_REPLACED