Hello traders everywhere. The stock market is finishing up the week mixed, much like the entirety of the week was. We saw wild swings in both the stock market and Bitcoin. And it might not be over yet with a couple of things looming. 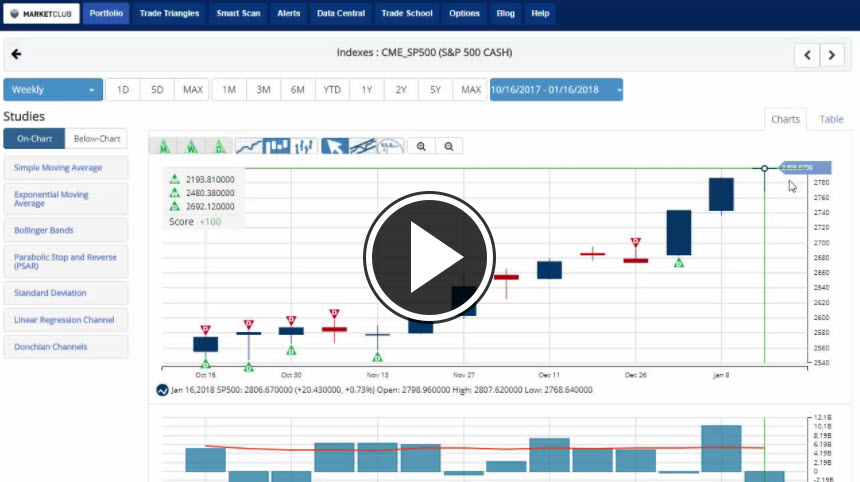 Consumer sentiment unexpectedly declined in January to a six-month low as American households viewed the economy less favorably, as reported by the University of Michigan report that was released Friday.

The decline in sentiment included a decrease in a measure of buying conditions for big-ticket goods, indicating consumer spending may slow early this year after a solid holiday shopping season.

The setback in purchasing conditions was mainly due to less attractive pricing, according to the University of Michigan. That was reflected in a pickup in increases in expected inflation rates over the coming year and longer term.

At the same time, the expectations index remained stable, with 70% of respondents saying they thought the impact of the tax reform act would be positive. What's more, the survey showed lingering strength in personal finances. Improved finances were reported by half of all respondents, matching the 2017 average which was the best in 17 years.

Hello traders everywhere. The January Bitcoin (CME:BRTI) selloff gained momentum on Tuesday when the cryptocurrency dropped as much as 13% in early trading as the prospect of global regulatory crackdowns appeared to spread.

A South Korean news website Yonhap reported that Finance Minister Kim Dong-yeon had told a local radio station that the government would be coming up with a set of measures to clamp down on the "irrational" cryptocurrency investment craze.

South Korea said on Monday that its plans to ban virtual coin exchanges had not yet been finalized, as government agencies were still in talks to decide how to regulate the market. 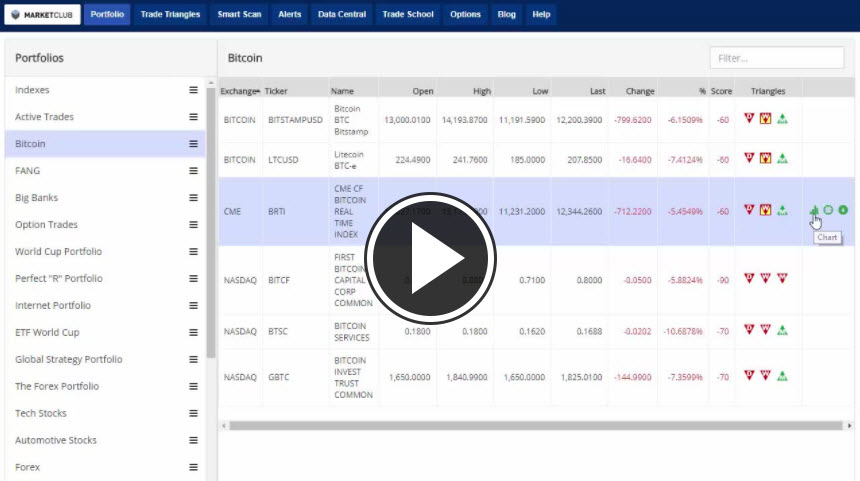 That news broke just as a report surfaced that a senior Chinese central banker had said authorities should ban centralized trading of virtual currencies and prohibit individuals and businesses from providing related services.

China shut down exchanges operating on the mainland last year - a move that also sparked a selloff.

Hello traders everywhere. The stock market is posting new intra-day record highs again as traders turn their sights to a wave of corporate earnings. Most experts believe that earnings season will be exceptionally strong on the heels of the new U.S. Tax Code.

An early indication of this can be seen by the stronger than expected earnings from J.P. Morgan today. The most prominent U.S. lender by assets said the new tax law would help future profits by not only reducing the amount it pays the federal government but also by stimulating more business.

Wells Fargo (WFC) on the other hand fell 0.8% after it set aside $3.25 billion in the fourth quarter to cover legal expenses related to probes into its mortgage and sales practices. 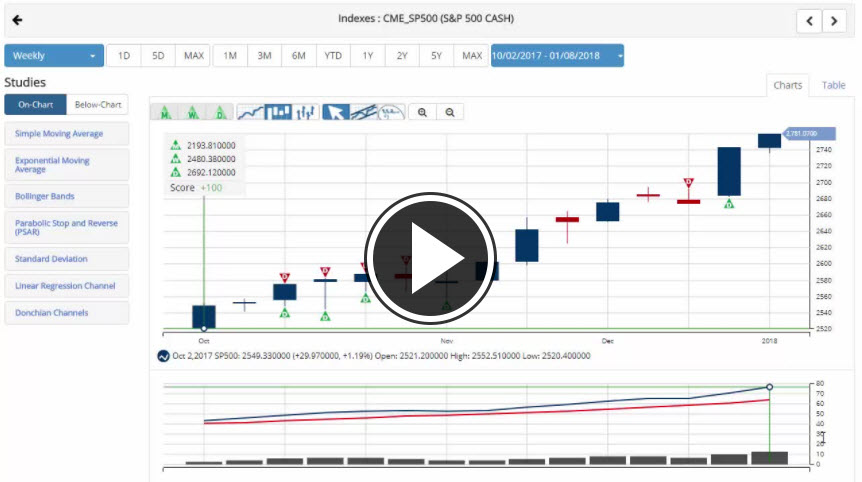 Hello traders everywhere. Alibaba Group Holding Limited (NYSE:BABA) issued a NEW green monthly Trade Triangle on Tuesday (1/9/18) which means it could be time to go long the stock. Now, if you missed the alert or didn't see the Trade Triangle yesterday, the price action today has given you the perfect opportunity to enter the trade at a lower/better level on a bit of a pullback. 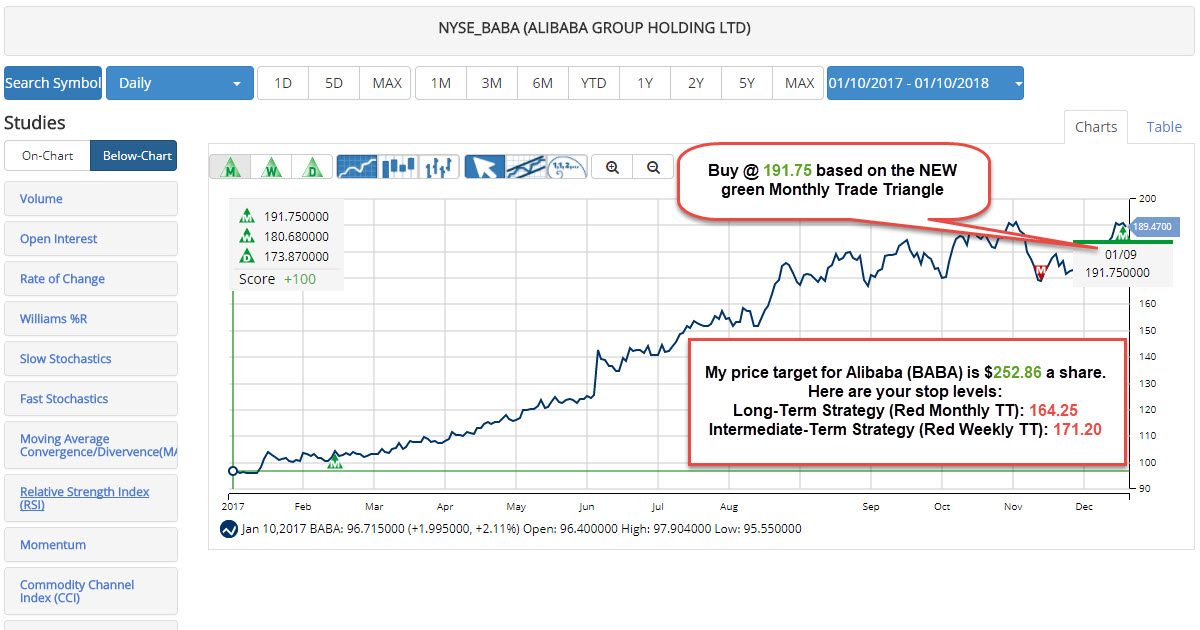 I believe that Alibaba is one of the more attractive stocks of 2018 based on the fact that it is the Amazon of the East, except it is growing faster and trading cheaper than Amazon. I look for Alibaba to produce another great year on the back of a truly impressive 2017 where we saw it produce an impressive 78% gain.

Hello traders everywhere. U.S. job growth slowed more than expected in December due to a decline in retail employment, but a pick-up in monthly wage gains points to labor market strength that could pave the way for the Federal Reserve to increase interest rates in March. 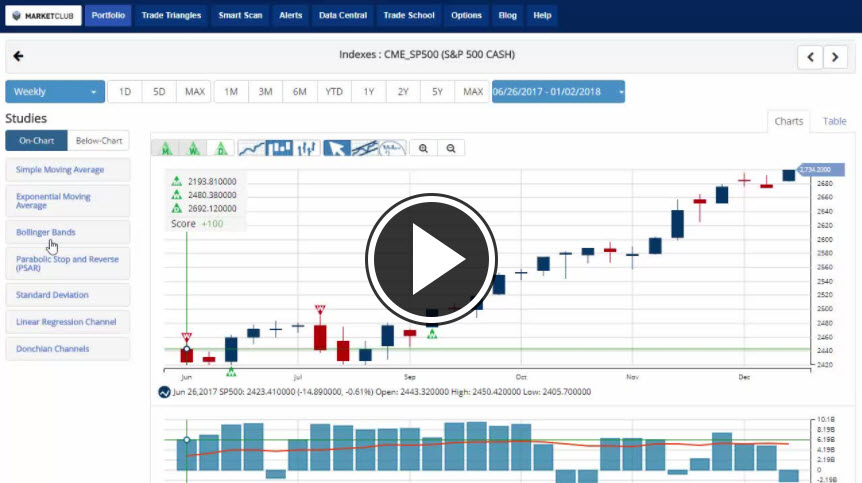 Nonfarm payrolls increased by 148,000 jobs last month after surging by 252,000 in November, the Labor Department said on Friday. Retail payrolls decreased by 20,300 in December, the largest drop since March, despite reports of a strong holiday shopping season.

The unemployment rate was unchanged at a 17-year low of 4.1%. Economists had forecasted payrolls rising by 190,000 in December. The economy needs to create 75,000 to 100,000 jobs per month to keep up with growth in the working-age population.

Job growth surged in October and November after being held back in September by back-to-back hurricanes, which destroyed infrastructure and homes and temporarily dislocated some workers in Texas and Florida.