But three closely-watched sources of energy data do not support such a drop in global oil inventories. The Energy Information Administration (EIA), the International Energy Agency (IEA) and OPEC itself published their monthly reports in January, attempting to include impacts of the production cuts. Two of the sources, EIA and OPEC, provide data that show (or imply) stock builds over the first half, and the IEA data show a drawdown but not of the magnitude suggested by Mr. Al-Fahil. END_OF_DOCUMENT_TOKEN_TO_BE_REPLACED

The Energy Information Administration (EIA) published its Short-Term Energy Outlook (STEO) for January, and for the first time provided its projections for 2018. After all of the hype about the OPEC production cut, it may come as a surprise that the EIA is projecting a rise in global oil inventories in 2017 and 2018.

A recent article noted that Saudi Arabia Is Buying Up America's Oil Assets. Saudi Aramco is buying U.S. refining and petrochemical assets as well as energy and technology companies through its Saudi Aramco Energy Ventures LLC fund.
Congress has recently received a Long-Term Strategic Review (LTSR) of the Strategic Petroleum Reserve. The SPR's mission is to protect the U.S. from severe petroleum interruptions. The LTSR was intended to identify the key challenges that could impact the ability of the SPR to accomplish its mission.

I submit that it ignores a key challenge, the foreign ownership of refineries and petrochemical plants, that could render the SPR crude supplies meaningless.

The existence of the SPR is a key factor determining oil prices because the market does not have to factor in large interruptions of crude supply into prices because it knows the government has the SPR and will use it. END_OF_DOCUMENT_TOKEN_TO_BE_REPLACED

According to the Energy Information Administration (EIA), world oil inventories are about 425 million barrels higher than their “normal” levels. In the U.S., inventories stand a 1.368 billion barrels, a few million off their recent peak. Given that supply glut, how could oil futures prices be at $50 after falling below $30? 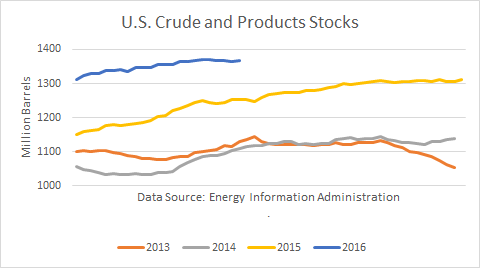 One answer is that the futures market assesses future developments. As discussed below, the peak of the glut appears behind us and the U.S. oil market is tightening, as rising demand narrows the supply-demand gap. This is best observed by looking at the trends in inventory storage changes for both petroleum products and crude oil. END_OF_DOCUMENT_TOKEN_TO_BE_REPLACED