With today being Friday the 13th, I thought it would be fun to see to if our readers had any trading superstitions. I've heard all kinds superstitions over the years such as, never trade in the first 30 minutes, never set stop-losses on round numbers, don't triple dip a stock, and never sell a stock crossing past $90. And then we have mine, I never buy a stock on Friday or at the open on Monday. It seemed that every time I tried to I end up on the wrong end of the trade. Maybe I just have bad luck!

Take a second to vote, then leave a comment with your trading superstition or any superstition that you may have. I bet we have some good ones out there.

U.S. hiring roared back in October after two disappointing months as employers added 271,000 jobs, the most since December. The unemployment rate fell to a fresh seven-year low of 5%.

Companies shrugged off slower overseas growth and a weak U.S manufacturing sector to add jobs across a range of industries. Big gains occurred in construction, health care and retail. Healthy consumer spending is supporting strong job gains even as factory payrolls were flat and oil and gas drillers cut jobs.

The gains are likely strong enough for the Federal Reserve to lift short-term interest rates at its next meeting in mid-December.

Based on this data:

The Greek government is running out of money and time. They need to agree to a deal with their Eurozone partners this weekend to secure the final part of its bailout loan and avoid defaulting on its debts. But without a deal, default could push the country towards leaving the Euro - a prospect that has become known as "Grexit".

What do you think?

As always, I would love to hear your thoughts on the looming Grexit. Please take a moment to vote on the poll and leave a comment.

After a nice rebound the last two days, the market has once again come under pressure from Greece. Stocks opened lower today as negative news out of Greece is weighing on sentiment. The standoff between Greece and its creditors took a turn for the worse on Thursday, with both sides citing "major differences" over how to save the country from bankruptcy. This news has put pressure on the European and U.S. equities markets.

That begs the question....

As always, I would love to hear from you. Take a moment to vote and leave a comment about the markets.

It was one year ago to the day that Twitter, Inc. (NYSE:TWTR) had its IPO on the NYSE. The reason Twitter went with the NYSE was because of the recent fiasco that Facebook experienced with its own IPO on the NASDAQ. Twitter did not want to repeat Facebook's disastrous roll out with all its negative publicity.

For those of you who don't know what Twitter does, it is an online social communications and networking service that enables users to send and read short 140-character messages called "tweets".

On November 7th, 2013, Twitter, Inc. (NYSE:TWTR) shares opened for trading at $26 and closed out the day at $44.90 which gave the company a valuation of $31 billion. This made instant billionaires of founders, Evan Williams who made $2.56 billion and Jack Dorsey who received $1.05 billion. 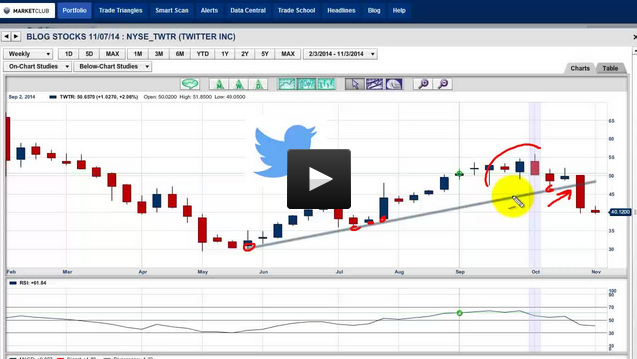 But it got even better because at the end of December 2013, Twitter had a market capitalization of $32.76 billion. Since those heady days in November and December of last year, things haven't gone quite so well for Twitter. For the year, Twitter is down over 34% and down almost 10% from its IPO closing price.

At the moment, this stock is not having a particularly happy birthday as all technical indicators are pointing south and show that the stock could go even lower from where we are now.

One area that could be very interesting for Twitter, Inc. (NYSE:TWTR) is an integration trend I see between tweets and TV/cable shows. That would be a big source of revenue for Twitter. Other areas such as social revolutions or crowd disruptions certainly are powerful, but I'm not sure how Twitter can make any money off of social unrest, which we are seeing more and more of these days. After all, who wants to sponsor a unpopular revolution?

While Twitter has been around since 2006 and has grown substantially since that time, the question must be asked, is this going to be a relevant source of social information in five or ten years from now? Or is something else in development that can make tweets and Twitter a thing of the past?

The overriding trend at the moment is negative. How far this trend continues on the downside remains to be seen, but it would not appear as though anyone is rushing in to buy this stock at the moment.

In recognition of Twitter's birthday/one year anniversary, I decided to put together a quick poll to get your feedback on just what you think about Twitter.

Looking forward to seeing what you have to say and how you feel about the stock.