Hello traders everywhere. One week after we saw the stock market make gains we've retreated into negative territory. All three indexes are posting weekly losses and continuing to be bound in a sideways trading range. This weeks weakness is due to a rally in crude oil prices, a pickup in government bond yields as inflation rises and geo-political uneasiness around the globe. 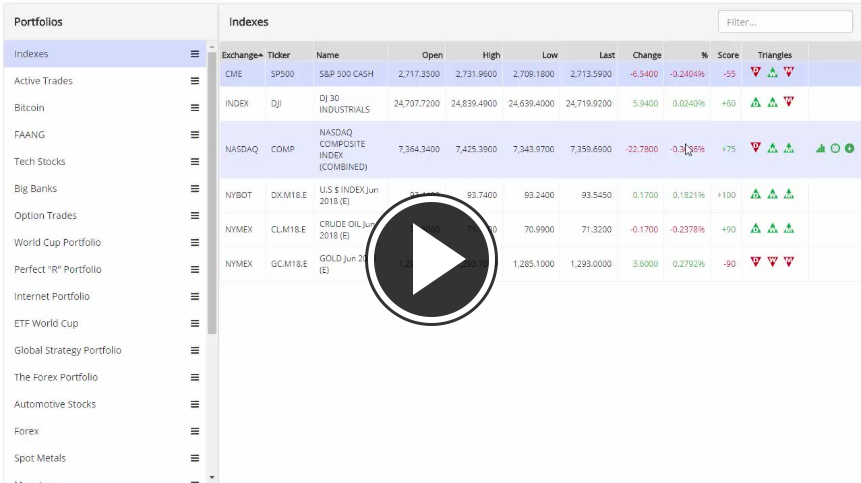 The U.S. Dollar continues to gain strength with a gain of +1.21% on the week. This weeks gain erases last weeks small loss as the dollar looks to heading higher. With green Trade Triangles on the board keep your eye on the $91.28, a move below that level will trigger a red weekly Trade Triangle indicating a move to a sidelines position. END_OF_DOCUMENT_TOKEN_TO_BE_REPLACED

Hello traders everywhere. A surging dollar is putting increased pressure on gold driving it down to its lowest levels of 2018 to date. Gold is currently trading below the $1300, it's the lowest level since late December of 2017. With red Trade Triangles across the board indicating a strong downtrend and higher than usual trading volumes expect gold to head lower.

The dollar's continued strength is due to a surge in interest rates. The benchmark 10-year note yield hit 3.095% on Tuesday, its highest level since 2011, while the two-year note yield traded around levels not seen in a decade. 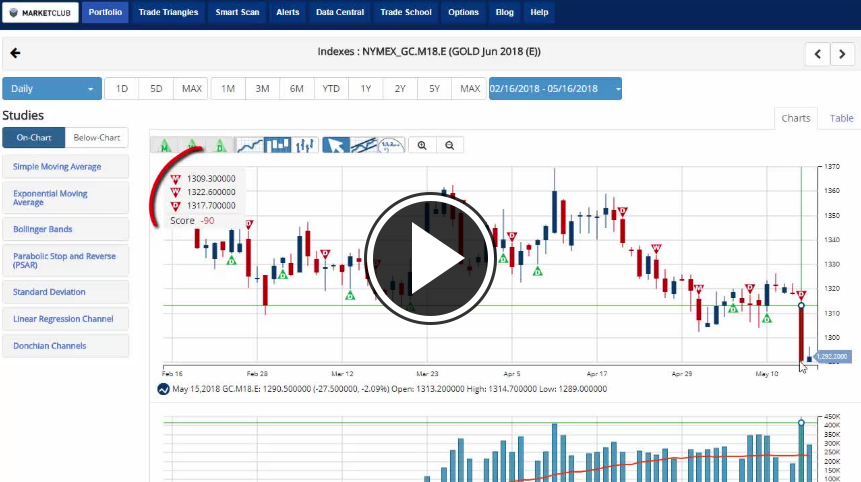 As for stocks, overall the stock market is on the rise with the big mover of the day being Macy's (M). Macy's shares rallied more than 10% on stronger-than-expected quarterly earnings. The company's same-store sales a key metric for retailers, rose 4.2% last quarter versus an estimate of 1.4%.

Bitcoin finally succumbed to the "bitcoin bears" and issued a red weekly Trade Triangle at $8,342.58 while breaking through the 50-day moving average, which could become the next level of resistance if bitcoin were to move lower.

END_OF_DOCUMENT_TOKEN_TO_BE_REPLACED

Hello traders everywhere. The DOW came close to breaking the 25,000 level in early trading, which would have been the first time since early February that it had traded at or above that level. But it wasn't to be as it soon retreated from those highs to only be trading slightly higher on the day. The biggest contributor to sluggish trading is thin volume, overall trading volumes have been declining for some time with Friday and Monday being two of the lowest-volume days of the year at the NYSE. Have traders started the ole "Sell in May and go away" trend? 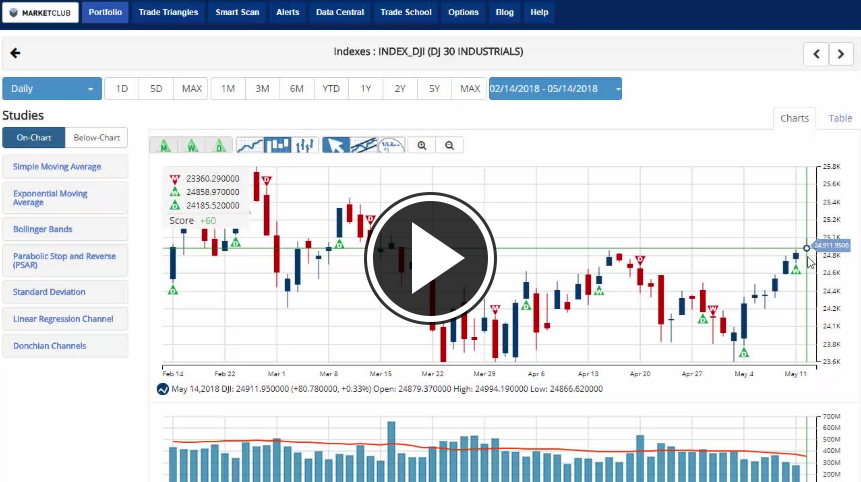 The big news of the afternoon was that the U.S. Supreme Court ruled that states can allow sports betting, which gave a boost to some of the Vegas/gaming stocks. The ruling takes the U.S. a step closer to legal sports betting in numerous states, possibly even nationwide. Currently, the practice is legal only in select places such as Nevada, home to the gambling capital Las Vegas. While Nevada's Gaming Control board reported $4.8 billion in sports bets last year, the black market total is considered to be many times the legal market.

"I think everyone who owns a top four professional sports team just basically saw the value of their team double," said Cuban, owner of the NBA's Dallas Mavericks.

Key Events To Watch This Week:

END_OF_DOCUMENT_TOKEN_TO_BE_REPLACED

Hello traders everywhere. For the first time in a few weeks, the stocks market is looking to post strong weekly gains. Friday morning kicked off with a bang as all three indexes were posting their strongest weeks since early March, but the push higher didn't last as the afternoon hit. However, it looks like they will all post weekly gains over 2% on the week. The S&P 500 and DOW both triggered new green weekly Trade Triangles on the recent market strength, but both still have red monthly Trade Triangles indicating that the overall long-term trend is still weak.

Is the dollars run over? After posting two weeks of over 1% gains, the dollar is posting its first weekly loss in three weeks with a loss of around -.10%. While it's not a huge loss, it does signal that some weakness has entered the arena after weaker than expected US inflation figures for April were reported. 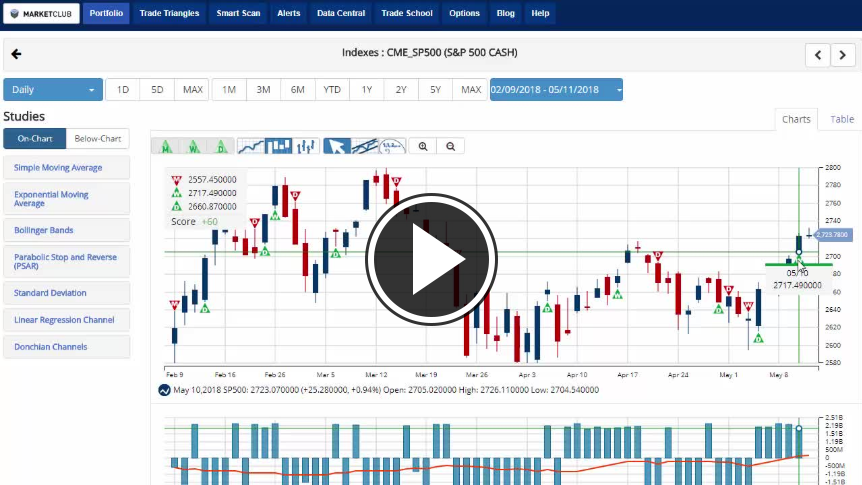 Crude oil has backed up last weeks gains with a +1.8% gain this week and continuing to trade above the $71 level. The move higher was exacerbated by geopolitical tensions in the Middle East, which caused concerns over potential supply disruptions down the road. Look for oil prices head higher as bulls exploit geopolitics to power the rally, but the question is, for how long?

Gold has jumped higher on the dollars recent weakness. After three straight weeks or significant losses gold is looking to close out the week higher with a +.50% gain. With geopolitical tensions gaining strength and a weakening dollar look for gold to head higher from here potentially.

Bitcoin continues to be trapped in a tight trading range, and it is posting its first weekly loss after four straight weeks of gains with a loss of -11.9%. As I've been highlighting, the 200-day MA is proving to be a tough level of resistance for Bitcoin to break and with this weeks loss the 50-day MA level of support at 8,262.19 is close to being broken to the downside.

END_OF_DOCUMENT_TOKEN_TO_BE_REPLACED

Hello traders everywhere. After a weak opening crude oil has provided the catalyst to lead the stock market higher driven by the energy sector. The move higher follows President Donald Trump's decision to pull the U.S. out of the Iran nuclear deal, which he announced yesterday. President Trump said that the U.S. would be walking away from the Iran deal and that sanctions on the Middle Eastern country would be reinstated.

"It is clear to me that we cannot prevent an Iranian nuclear bomb under the decaying and rotten structure of the current agreement," Trump said from the White House Diplomatic Room. "The Iran deal is defective at its core. If we do nothing we know exactly what will happen."

After the announcement, the stock market finished Tuesday trading mixed to unchanged with oil being the big loser dropping -1.37% on the day. The move higher today was delayed, but once it kicked in oil hit a new three and a half year high of $71.36 gaining over +2% on the day. 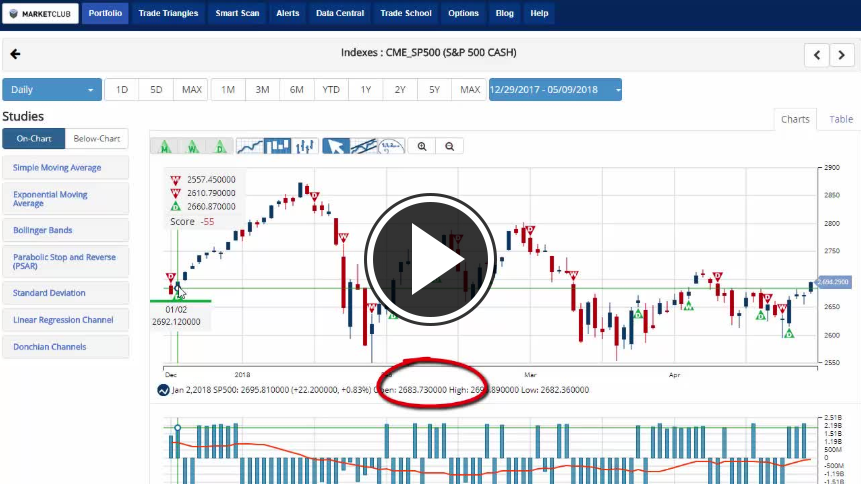