I come not to praise Judy Shelton, nor to bury her. But the blanket media and political condemnation of her as President Trump’s latest (I forget which number we’re up to) nominee for the Federal Reserve Board strikes me as having nothing to do with her actual qualifications for the job but rather a reflection on her sponsor and her failure to be “the right kind of people,” meaning someone who doesn’t subscribe to the establishment groupthink.

During the several days prior to her confirmation hearings before the Senate Banking Committee last week, and back when she was first nominated, there was a flurry of scare headlines and stories about her unfitness for the position. No less than the sanctity of the independence of the Fed and the security of the U.S. economy was in jeopardy if she was confirmed. Here’s a small sample:

The Post also provided 10 of what it says are her “most controversial quotes.”

Controversial quote number 1 was this: “I don’t see any reference to independence in the legislation that has defined the role of the Federal Reserve for the United States. It would be in keeping with its historical mandate if the Fed were to pursue a more coordinated relationship with both Congress and the president.”

Indeed, how independent can the Fed be when its members are appointed by the President and ratified by the Senate? And it funds itself by buying massive amounts of government securities. Not to mention that Congressional mandate thing. Is it unreasonable to expect an agency that has a Congressional mandate might actually have to report to Congress every so often to make sure it’s adhering to that mandate? END_OF_DOCUMENT_TOKEN_TO_BE_REPLACED

Well, it certainly seems as though the equity markets cannot make up their minds which way they want to go. The question on every investor's mind is, is this going to be a major top in the market like 2007? 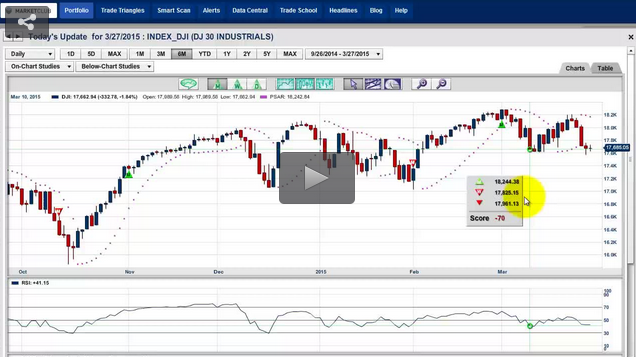 I remember reading an article years ago titled "They do ring a bell at the top of the market." It was an intriguing title and, of course, that's the reason I read the article. In essence, it boiled down to this, when the Federal Reserve starts raising interest rates, it can be a major negative for the market.

What will happen when interest rates start to move up again, as they invariably will? Are we going to see a move out of stocks and into safe yield bearing instruments again? END_OF_DOCUMENT_TOKEN_TO_BE_REPLACED

It is as notable as a 2nd term president handing off the big problems to the next guy, as George Bush did with Barack Obama in 2008; the changing of the guard at the Fed, that is.

Alan Greenspan oversaw the making of a stock bubble in the final phase of the great bull market ended in 2000.  He then instigated a credit bubble, which launched a housing bubble, made the credit hopped consumer feel wealthy and oh yes, built unsustainable distortions into the system through diced and sliced debt derivative vehicles of all kinds.

Then in 2006 he deftly made the hand off to Ben Bernanke.  Bernanke then dealt with the Maestro’s second aftermath as it began cropping up in 2007 and now, nearly 4.5 years into a cyclical bull market that has another 6 months or so to run if it is to match the two previous cycles (not a given), it is time once again for a hand off. END_OF_DOCUMENT_TOKEN_TO_BE_REPLACED

The following is the opening segment to this week’s premium letter, NFTRH 242.  The balance of #242 went on to discuss the technical status of US and global stock markets, key commodities, the current status of ‘inflation expectations’, precious metals and currencies; all in detail.

Last week we introduced the theoretical 'taper to carry' scenario whereby the Federal Reserve would indeed 'have the balls' to begin the end of traditional QE and transition the inflation via a new set of mechanics.  Mind you, we still get inflation under this scenario, but it would be less stealth and more honest and obvious to the public.  Here are the theoretical components of the play… END_OF_DOCUMENT_TOKEN_TO_BE_REPLACED

The Federal Reserve is, of course, a bank. So after it has a meeting, it issues a statement outlining the discussion – a "bank statement." Hmm... Now that I think about it, that must be where the acronym "BS" comes from.

Notwithstanding what we read and hear, when Congress established the Federal Reserve as a central bank 100 years ago, its primary purpose was to protect the banking system. The Federal Reverse shifted risk from the private sector to the public, and through the slow devaluation of the dollar, the cost of this shift fell on the average Joe rather than on banking tycoons. Today, an entire generation is paying for this system with a good portion of their life's savings.

I pride myself on explaining complex financial situations in everyday language. However, when it comes to the Federal Reserve, I readily admit that I am sometimes befuddled. I used to watch Alan Greenspan testify before Congress when he was Chairman of the Fed, and I often ended up asking myself, "What did he just say?" The Fed's code and doublespeak is Greek to me, as it is to most folks. END_OF_DOCUMENT_TOKEN_TO_BE_REPLACED