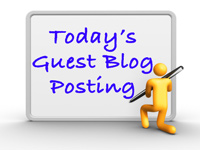 Today we have a special guest blogger, Price Headley of Big Trends. Price is a Traders Hall of Fame inductee and is a regular contributor on CNBC, Fox News and Bloomberg Television, and in a variety of print and online financial news outlets. Today Price will share some of his insight on the recent sell-off and his predictions on the week ahead. Be sure to look over Price’s shoulder as he trades with 3 Months of his Investor’s Edge Newsletter FREE!

If you thought two weeks ago was rough, last week's 7.0% slide made the previous week's 4.0% pullback look like child's play. There is sort of' a bright spot in there though, IF the bulls play their cards right and the bears still aren't angry. (That's a big if though.)

Before we slice and dice the market though, let's run down last week's and this week's big economic numbers. 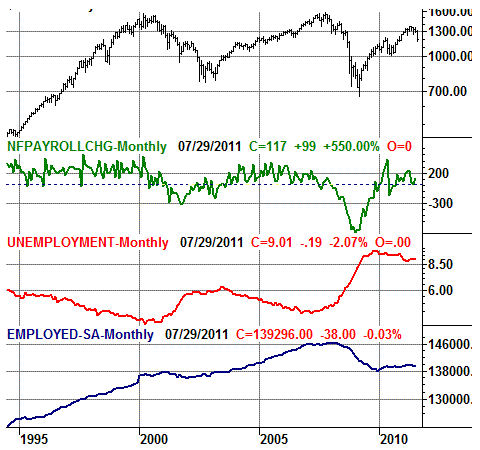 The average consumer was proven to be surprisingly more empowered too. Incomes were up by 0.1% (modest, but something positive), while spending actually fell 0.2% (one of those rare net-savings months). Hourly earnings were up, and credit capacity soared by $15.5 billion (a multi-year record). In short, spenders have the ability to do so if they wish – they just don't wish to, or at least the market doesn't see it happening.

All that being said, it's difficult to attribute last week's market wide implosion on a weak consumer – this is not a reflection of what is. The pullback has 100% to do with what the market assumes will be the case for consumer 6 to 9 months from now, which is a far less attractive picture. Trouble is, opinions change rapidly.

Take a look at the whole calendar, and at what's coming next week. 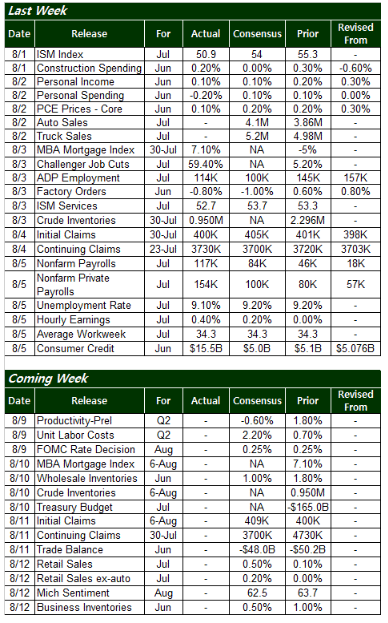 It's a light week to begin with, and a bunch of what's coming isn't even all that heavy. In fact, the only items of real interest to us are Thursday's unemployment claims numbers and Friday's retail sales for July. With the former the bulls are needing something decidedly positive, and a little luck that the market will view it as such. With the latter, it's the same thing.

What do you say after a week like last week? Any meaningful trend analysis is pointless, as there is no 'trend' to speak of. It's called a price shock, and all conventional analysis goes out the window.

At this point, the questions primarily focus on when – or if – we get a bounce, and how long will it last if we do? In other words, was Thursday/Friday a major or minor capitulation?

There's actually quite a bit of evidence for a capitulatory move that sets up bullishness from here. We can't detail all of it, but the list includes [and note these are all "blowout, can't get no worse" signals] a surge in the number of new lows, a surge in the CBOE Volatility Index (VIX) (VXX) (VXZ), and a surge in the put/call ratios. All of these can be and often are associated with bottoms.

Let's at least go over a couple of these ideas though, beginning with the ones we commonly look at – put/call readings, volume, and the VIX.

The chart below including S&P 500 (SPX) (SPY) actually speaks for itself, simply because all of these items hit absurdly high levels late last week. The last time we saw anything close to these levels for any of these three data sets was mid-June, and then mid-March… which happened to be pretty major market lows in both cases. 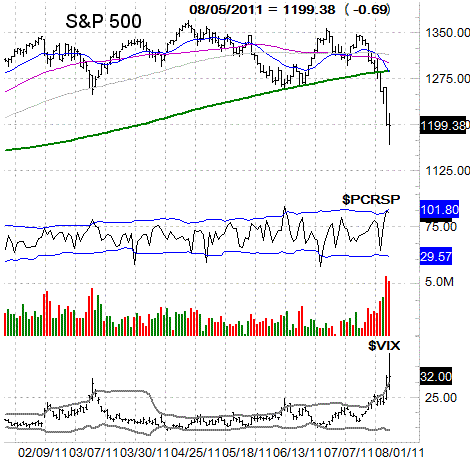 As for the other data set – new lows – this is visited much less often, but can be telling when we see them.

Again, the charts speak for themselves. This time we'll compare the NASDAQ (COMP) (QQQ) with its new lows from Friday – there were 435 of them. (Note a 'new low' is triggered as long as the stock hits a new 52-week low, whether it closes in the red or not.) That's a massive number, and as you can see, those new-low spikes tend to coincide with major market bottoms; see the middle of 2010. 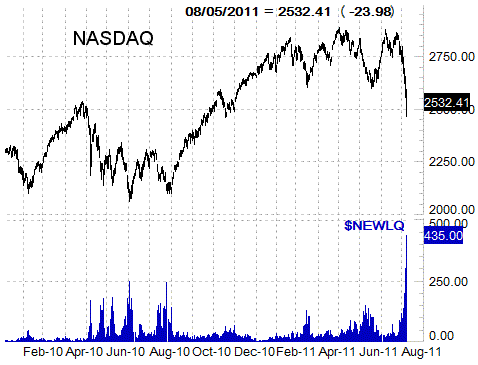 And just for the record, the NYSE posted 825 new lows on Friday….another stunning number – the highest since seen since the killer selloffs seen in late 2008. Both imply those blowout capitulation days contrarians like to seek out as long-term buying opportunities.

Here's the problem with the "too many new lows" theory – we saw such blowouts all throughout early 2008, yet none of them were 'the' bottom until March of 2009 when the NASDAQ gave us 611 new lows. Point being, it's not foolproof… just suggestive.

With all of that being said, it's not entirely apples-to-apples to compare 2008 to 2011. In 2008, investors were largely blind to the fact that stocks were on the expensive side, and traders denied we were heading into a recession. Now, perhaps excessively nervous, traders have a knee-jerk reaction to sell at the first sign of trouble despite the fact that stocks are (on a trailing P/E) basis as cheap as they've been in two decades… seriously. 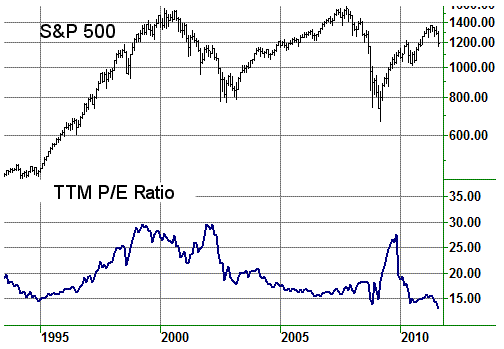 So, don't be fooled – this recent selling is/was a bet, and only a bet, that we're headed into another recession. Maybe that's the case, but as they say, economists have predicted nine of the last five recessions – the direst economic predictions rarely pan out, and most dire economic events are rarely foreseen like investors think they're seeing on the horizon now.

So where does that leave us now? Somewhere between a rock and a hard place.

By most measures, the market should be in bounce mode number simply because it's so oversold, and also because it's so undervalued n an earnings basis. On the flipside, if traders choose to ignore value and are not done pounding stocks, the value or bounce-setup is irrelevant.

This is a scenario where the best place to be may be on the sidelines for a while, while this thing runs its course. If you gotta trade though, we see more short-term upside than downside. Don't try and catch a falling knife, however – buy on the way up.