Hello traders everywhere! Adam Hewison here, President of INO.com and co-creator of MarketClub, with your video update for Thursday, the 6th of February.

Yesterday, the Coca-Cola Company (NYSE:KO) announced it was buying a 10% stake in Green Mountain Coffee Roasters, Inc. (NASDAQ:GMCR). Under the terms of the deal, Coke will purchase 16.7 million shares in Green Mountain for about $1.5 billion. 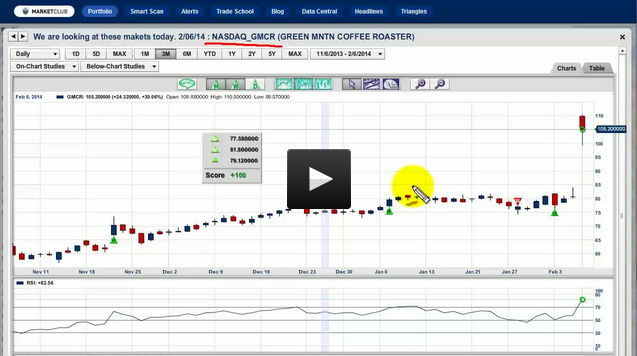 This appears to be a match made in heaven as Green Mountain will now become the official maker of the soda giant's single-serve cold beverages, built on its Keurig pod-based system.

Green Mountain has a history of making successful partnerships, one of which is with Starbucks.

So, how were the Trade Triangles positioned before this announcement was made public on Wednesday? In today's video, I will show you exactly how you would have traded the stock of Green Mountain using the Trade Triangle technology.

How is this going to affect SodaStream International Ltd. (NASDAQ:SODA)? I will also explore that question in this video.

The Dow Is Lower For The Week

The DOW is lower for the week and there would have to be a massive rally today and tomorrow to put it in the unchanged column. I don't necessarily see that happening, but we will be looking at the job numbers on Friday which should have the ability to move the markets one way or the other. Predicting Friday's Labor Department tally of U.S. job growth in January is turning out to be as tricky as forecasting winter weather.

Gold Is Higher For The Week

One area to watch for tomorrow is a close in the spot market over $1,266.5. This would represent a new high weekly closing for gold and would be a strong indication that gold has completed a major base.

The Dollar Is Flat For The Week

The Dollar is flat for the week after its massive up move last week against the Euro. I will be taking a close look at this cross today and analyzing just how high can the Dollar go.

Crude Oil Is Higher For The Week

Despite all the extreme weather here on the East Coast and the mid-west, crude oil looks firm and is higher for the week. I will be looking at the crude oil market in detail today to see where this commodity is headed next.