Editor's note: You'll find a text version of this article below the video.

For 3 years, Russia's stock market has been drifting lower. Here is why that's important.

The stock market shows the mood of society.

And social mood drives social actions -- like public protests and even war.

That means that if you follow the stock market, you'll know what kinds of events are likely to happen in any country. 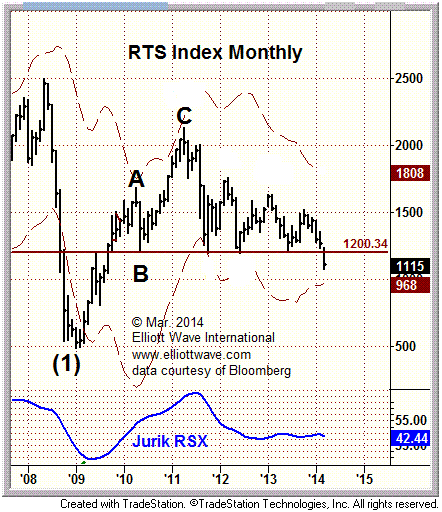 Take a look at this chart. The Russian stock market topped in April 2011. But three months earlier, in January 2011, our European Financial Forecast gave subscribers a warning about the coming reversal. 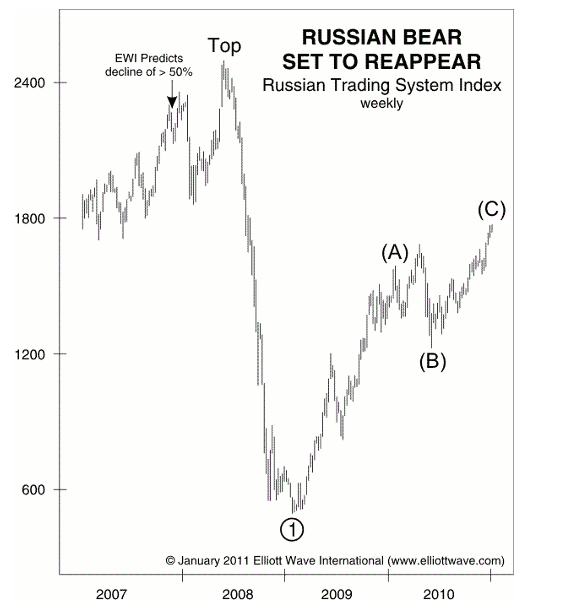 Look closer. As you can see, the Russian stock market dropped sharply during the 2007-2009 financial crisis. Then the RTS rebounded, but only in three waves -- A, B, C, which is a counter-trend move. That's why, in 2011, it was clear that Russia's stock market was about to decline.

But stocks weren't the only things set to turn negative. At the time, our European service also made a forecast that an unstable new social climate that would soon follow. One of our specific forecasts was that U.S.-Russia relations would sour, and that the economies of eastern Europe would unravel.

Over the past three years, we did see economies of numerous central and eastern European countries crash. In Ukraine too, where the stock market is down some 75 percent, negative mood is now driving the country's politics, putting it on the brink of civil war.

On Monday, March 3rd, Russian shares fell another 12%, in one day. That brings the total decline since the April 2011 peak to about 50%, in-line with our 2011 forecast. Here is a zoomed in look at the latest crash. 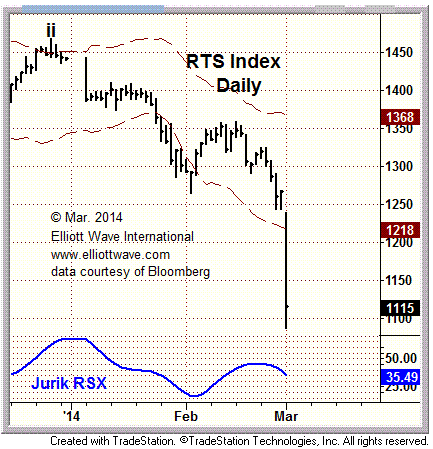 Recently, the European Union vice president Vivian Reding told CNBC that she hopes that "common sense comes back and the two sides manage to come together to create a common country in the interest of all Ukrainian people."

We hope for the same thing. But it is important to realize that as long as social mood is trending negatively, the opposite is most likely to occur.

We'll be following social mood as it unfolds in this potential center of a new Cold War.

This article was syndicated by Elliott Wave International and was originally published under the headline The Crisis in Ukraine: What's Next?. EWI is the world's largest market forecasting firm. Its staff of full-time analysts led by Chartered Market Technician Robert Prechter provides 24-hour-a-day market analysis to institutional and private investors around the world.

3 thoughts on “The Crisis in Ukraine: What's Next?”