The old adage is buying the rumor and selling on the news; however, during this recent market correction, it's been the opposite. Selling the rumor and buying the news has prevailed when it comes to interest rate hikes and the geopolitical tensions between Russia and Ukraine. In both cases, the anticipation of rate hikes has sent the market into a downward tailspin despite the fact the Federal Reserve hasn't put forth any rate hikes. In addition, the anticipation of the Russian/Ukraine conflict boiling over into an invasion by Russia drove the markets further into correction territory.

As a result, the markets entered deep into correction territory. Over a third of the Nasdaq 100 stocks traded off at least 30% or more from their highs, over half of the S&P 500 fell 15% or more while the median biotech stock had sold off by 60% or more. In addition, massive amounts of market capitalization have been eviscerated across the board, with many individual stocks selling off 50% or more throughout this downward spiral.

Per Tom Lee, many factors, including the market's big reversal at the onset of Russia's invasion of Ukraine, indicate the markets are now bottoming around these levels. Lee stated that the market's stunning comeback in stocks and a reversal in the Cboe Volatility Index signal that the pain in the market could be coming to an end. The market had a "buy the invasion" moment, Lee said in a note. The S&P 500 opened down more than 2.6% on the invasion news, and oil prices surged above $100 per barrel. However, markets typically sell off into the buildup of geopolitical escalations but rally on the day of the invasion. END_OF_DOCUMENT_TOKEN_TO_BE_REPLACED

Normally the summer months tend to slow down as most traders like to get away for a short break and a little R and R. This year however has been different, as turmoil in the world stage continues. You only have to look at what is going on in the Ukraine, which continues to escalate with Putin's quest to restore the old Soviet Empire. Over in the middle east, the picture is grim and the hatred between Hamas and Israel shows no signs of a resolution. With all that going on, you would think that nothing else could come along to upset the apple cart.

The biggest news this week in my mind was not the Ukraine or the conflict between Hamas and Israel, it was the theft of 1.2 billion usernames and passwords! 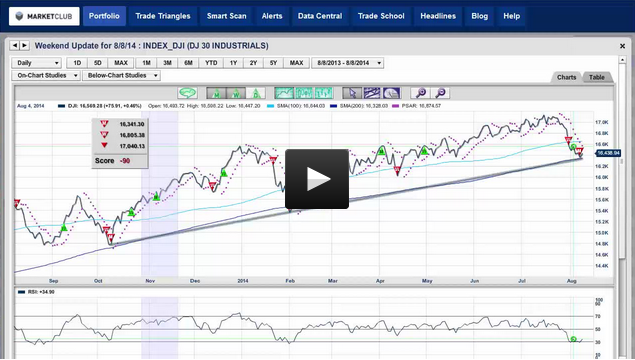 This astounding feat was accomplished by a small group of eight Russian hackers. As you may recall, the US and Europe upped their sanctions on Russia, and tit for tat, Russia turned around and cut imports from both Europe and the US. I am afraid that the theft of 1.2 billion usernames and passwords is just another escalation of cyber warfare that Russia is spearheading against the West. END_OF_DOCUMENT_TOKEN_TO_BE_REPLACED

In all the years I've been following the markets there comes a time like now, when geopolitics takes center stage. I am of course referring to the recent annexation of the Crimea by Putin. The question now is with a very tepid response from the US and the EU will Putin say to himself Crimea was easy I'll do the same thing with the Ukraine. With an approval rating of 80% back home in Russia, Putin and has little to worry about as he practically walks on water in the minds of most citizens.

What are your thoughts on:

Thank you for taking the time to share your comments and viewpoint with us.

Every success in Q2 and beyond,
Adam Hewison
President, INO.com
Co-Creator, MarketClub 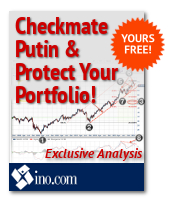 We are living in a pretty worrisome time. Right now, one man has a stranglehold on our financial future and he may be the cause of what could be America's greatest economic challenge since the 2008 meltdown.

So, what can you do about it? How can you both protect and profit from this volatile time?

I've completed an exclusive report that outlines strategic steps that you can take to checkmate Putin and protect your portfolio! There is no cost to instantly access this report.

I really hope you enjoy this report and fully absorb what disaster could be knocking at our door!

Editor's note: You'll find a text version of this article below the video.

For 3 years, Russia's stock market has been drifting lower. Here is why that's important.

The stock market shows the mood of society.

And social mood drives social actions -- like public protests and even war.

That means that if you follow the stock market, you'll know what kinds of events are likely to happen in any country. END_OF_DOCUMENT_TOKEN_TO_BE_REPLACED