This week, investors believe that they may have finally gotten the green light for ECB easing. With Eurozone inflation officially turning to deflation, investors believe that Mario Draghi and the ECB have been backed up into a corner with no escape, thus they will be forced to initiate a Quantitative Easing program that will balloon its balance sheet. In fact, the buildup towards this move started a few months back with Mario Draghi sending ever clearer signals of the ECB’s intent toward a full blown QE that will probably involve purchases of government bonds in a Federal Reserve-like manner.

If you will recall, Mario Draghi had also outlined the ECB’s intent to balloon its balance sheet back to its 2012 record of roughly €3.1 trillion. With the ECB’s current balance sheet at €2.216 trillion that means an estimated €884 billion in additional liquidity coming to the markets. As would be expected, the Euro has been in utter meltdown over the past few months, sliding to a low not seen in more than 9 years; of course, all this comes on the back of the impending liquidity injection and especially now as deflationary fears were confirmed with the Eurozone’s CPI at -0.2%. So far, this is par for the course, yet for me, this dredges up old memories of 2012.

Just by stating the obvious, that the ECB has to increase its balance sheet by a jaw-dropping €884 billion in order to increase its balance to the size it was a little more than two years ago, shows just how big a mistake the ECB has made in its policy since then. Across the “pond,” the Federal Reserve’s balance sheet has been growing since 2012 and its size has only now stabilized, as the US enjoys above-trend growth, a hair’s breadth of full employment and core inflation at a decent 1.7%. In the meanwhile, as the ECB was aggressively shrinking its own balance sheet, Eurozone growth came to a virtual standstill, unemployment remained stubbornly high, exports slowed, manufacturing weakened and, of course, the Eurozone moved into deflation.

From the chart below, comparing the growth rates in the US and the Eurozone, it becomes clear how devastating this move was; while US growth accelerated, Eurozone growth collapsed. Without mincing words; the chart illustrates that the ECB was patently wrong in shrinking back its balance sheet so fast and is, for all intents and purposes, responsible for the Eurozone’s economic crisis.

The Bust and Boom Cycle

Basically, this creates a very vicious cycle for the Eurozone and, of course, the Euro. ECB stimulus balloons its balance sheet, the Euro is devalued and exports gradually begin to recover and pull growth back up and after the bust comes a boom, or perhaps more aptly, a recovery. But therein lies the catch; once the Eurozone recovers, the ECB – by its nature a very conservative entity (rooted by its strongest member, the German Bundesbank) – begins to fret over inflation and that always seems to lead to premature tightening and, as a result, the inception of yet another bust.

Because of the strong link between the Euro and European growth and inflation levels and because growth tends to recover whenever the Euro is low it means that those monetary cycles are reflected in the EUR/USD rate. Every time the Euro is low, growth recovers and the ECB begins to narrow its stimulus, then the Euro gradually rises until exports stumble, deflation comes back and bets of another ECB stimulus push it down once again. It happened in 2011 when the Euro reached €1.5 and it happened last year when the Euro reached 1.4. Now, however, we come to the real test of the Euro; a delicate juncture between another potential boom cycle and a possibly prolonged bust cycle. If the Mario Draghi and the ECB can learn from the past and this time, as the Federal Reserve did, maintain a big balance sheet for a prolonged period then the boom and bust cycle could be over and the Euro could break the 1.16 threshold and begin a much broader sell off wave. The question is will Draghi learn from the past? Time will tell, but a break of the 1.16 could signal that the market movers believe that, this time, ECB stimulus is here to stay and with it a falling Euro. 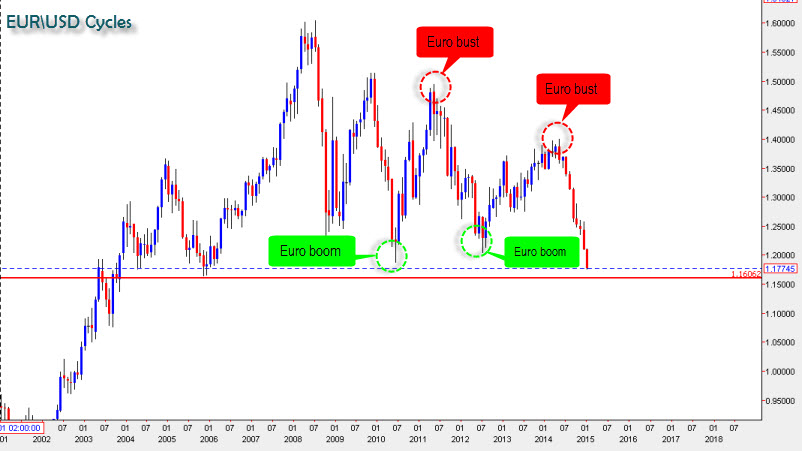 3 thoughts on “Can The ECB Learn From Its Own Mistakes?”