Perhaps you didn't hear about it, or if you did you dismissed it because of who said it, but I found some comments by Greece's finance minister over the weekend about the European Central Bank's quantitative easing bond buying program very insightful – and in synch with my own thoughts.

Speaking at the Ambrosetti Forum in Italy over the weekend, Yanis Vardoulakis warned that the ECB's purchases of sovereign bonds, which started last week, will create an unsustainable stock market bubble that is unlikely to boost private-sector investments in the euro zone.

"QE is all around us, and a great deal of optimism hangs on it," Varoufakis said in his speech, "Presenting an Agenda for Europe. "At the risk of sounding like a party pooper, let me say that I find it hard to imagine how the broadening of the monetary base in our fragmented, and fragmenting, monetary union will transform itself into a substantial increase in private investment in productive activity." END_OF_DOCUMENT_TOKEN_TO_BE_REPLACED

Money makes the world go around, but it’s the trends, the big trends in money, that we find interesting and profitable.

This morning ECB president, Mario Draghi, who famously stated a couple of years ago that the ECB would do "whatever it takes" to stimulate the European economy. Well, clearly that little sound bite and some awkward moments (Greece, Spain, Portugal) were not enough as Europe remains mired in a recession.

So what does Europe do? Well, they trot out Mario Draghi again to announce another stimulus package. So far, the ECB has been wrong on its growth forecast as well as its inflation forecast. It doesn't exactly inspire confidence in their forecasting ability. Here is my take and it's simple - they have no idea how to get out of this economic hole. I never bought into the idea that getting out of a hole, meant you had to dig a deeper hole.

How are the markets going to react and translate this latest move by the ECB? 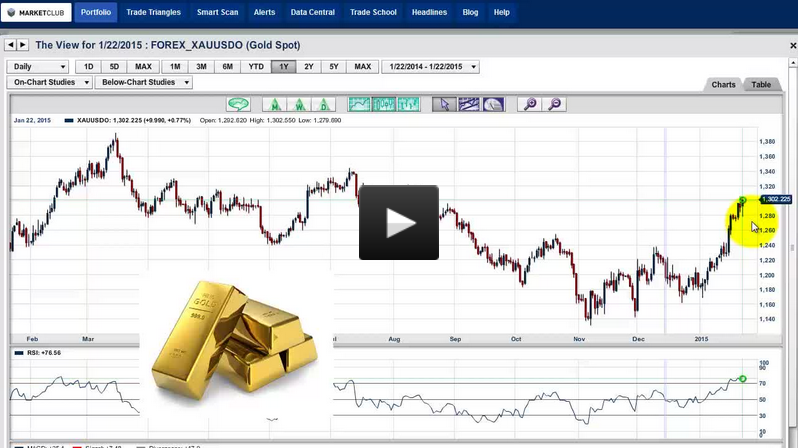 In today's video, I'll be looking at all the major markets. I'll take a look at how they are reacting to the ECB’s announcement of its 60 billion monthly bond buying program slated to continue well into 2016. END_OF_DOCUMENT_TOKEN_TO_BE_REPLACED

This week, investors believe that they may have finally gotten the green light for ECB easing. With Eurozone inflation officially turning to deflation, investors believe that Mario Draghi and the ECB have been backed up into a corner with no escape, thus they will be forced to initiate a Quantitative Easing program that will balloon its balance sheet. In fact, the buildup towards this move started a few months back with Mario Draghi sending ever clearer signals of the ECB’s intent toward a full blown QE that will probably involve purchases of government bonds in a Federal Reserve-like manner.

If you will recall, Mario Draghi had also outlined the ECB’s intent to balloon its balance sheet back to its 2012 record of roughly €3.1 trillion. With the ECB’s current balance sheet at €2.216 trillion that means an estimated €884 billion in additional liquidity coming to the markets. As would be expected, the Euro has been in utter meltdown over the past few months, sliding to a low not seen in more than 9 years; of course, all this comes on the back of the impending liquidity injection and especially now as deflationary fears were confirmed with the Eurozone’s CPI at -0.2%. So far, this is par for the course, yet for me, this dredges up old memories of 2012.

Just by stating the obvious, that the ECB has to increase its balance sheet by a jaw-dropping €884 billion in order to increase its balance to the size it was a little more than two years ago, shows just how big a mistake the ECB has made in its policy since then. Across the “pond,” the Federal Reserve’s balance sheet has been growing since 2012 and its size has only now stabilized, as the US enjoys above-trend growth, a hair’s breadth of full employment and core inflation at a decent 1.7%. In the meanwhile, as the ECB was aggressively shrinking its own balance sheet, Eurozone growth came to a virtual standstill, unemployment remained stubbornly high, exports slowed, manufacturing weakened and, of course, the Eurozone moved into deflation. END_OF_DOCUMENT_TOKEN_TO_BE_REPLACED