The markets have been anything but predictable just a few weeks into 2016 and investors are wondering if we're on the verge of a major bearish reversal or it's a temporary correction. Oil seems to go lower and lower despite with no sign of stopping anytime soon while the economy is still reeling from the loss of Chinese demand and the impact of the first Federal Reserve rate hike. For investors, there's no better time to start getting defensive.

When uncertainty reigns in financial markets, certain sectors become safe havens. Companies that offer products that are used regardless of the state of the economy like healthcare and consumer staples tend to outperform during these times. These types of stocks generally carry a dividend yield as well which helps protect investors from downside movements.

The consumer staples sector is particularly attractive in the very beginning of a possible bear market because it's historically provided relatively high returns with low volatility. While most investors think of this sector as “boring” filled with plain vanilla stocks and companies, it's actually one of the highest returning sectors in the market regardless of economic direction.

Annualized returns by sector from 1962 to 2015 revealed that consumer staples generated gains of 12.9% – trailing just slightly behind healthcare. From a volatility standpoint, consumer staples had the second lowest with utilities being the least volatile.

In the consumer staples space, one stock stands out ahead of its competitors with a hefty dividend yield and solid growth prospects even if the economy officially turns south. For investors looking to protect their portfolio without compromising their returns, this company could be the answer.

As a company with international operations, its defied the trend of falling earnings due to foreign currency risk considering the strength of the US dollar. Local currency sales rose 7% in the third quarter year-over-year easily making up for the loss in the exchange rate. Sales in emerging markets have been very strong rising 18% in China and 12% in Indonesia.

Domestic North American sales rose 14% while the company has been on a roll beating earnings expectations for the last four straight quarters. Both domestically and internationally, Tupperware is seeing improving growth. Regarding emerging market sales, the company attributes its success on the rising middle class and believes that slowing growth concerns are “overblown.”

Looking at Tupperware's chart, we see that the stock fell during the late summer months last year before recovering and then falling again. 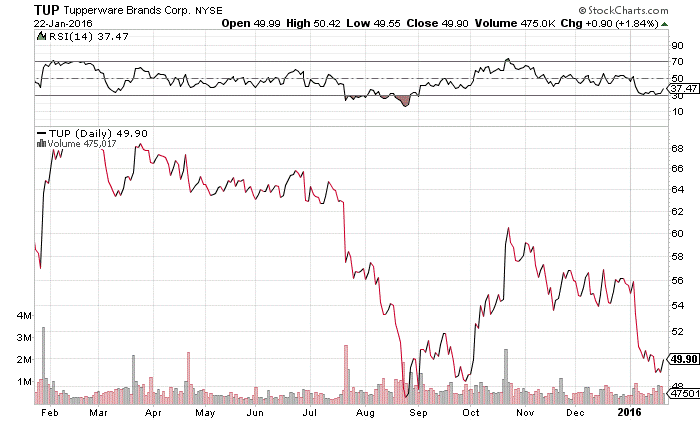 Given the stocks low RSI reading of 37.47, it appears to be very close to an oversold status. Another takeaway from the chart is that increases in value are generally accompanied by larger than average volumes – much greater than the declines. It's a signal that the stock is stronger than its current price might suggest.

The stock is cheap right now as well trading at a multiple of just 10.6 versus the industry average of more than 23. It's also much cheaper than its closest competitor, Newell Rubbermaid (NWL) which currently has a P/E of nearly 30.

Tupperware carries a very high dividend yield of 5.55% right now which helps protect investors from downside risk while boosting long-term returns. It's dividend payout ratio of less than 65% tells us that it's in no danger of cutting it anytime soon either.

Given full year earnings guidance and growth expectations, this stock is fairly valued at around $63 per share – a 26% gain from its current price.