Well it was quite a weekend here on the East Coast with a record-breaking blizzard that closed down Washington DC today and made digging out from the 30-some inches of snow quite an interesting challenge. For those of you who live on the East Coast like us, we hope that you and your loved ones were all safe over this dangerous storm.

Now let's take a look at the gold market. This market has been in a bear market for the last four years, almost the exact opposite of the equity markets that have been going up for the last six years. It appears technically that gold is once again coming into style as more investors are becoming leery of the equity markets and the value of their holdings and money in general.

A great deal of this uncertainty has been created by the Federal Reserve Board and the European Central Bank which seemed to have run out of ideas and tools. It appears to this observer that in the last few years these two central banks have literally been winging it on a hope and a prayer. I hope I am wrong on the one as it will make 2008 look like a walk in the park.

Looking at the long-term chart of gold, you see a MAJOR LONG-TERM SUPPORT TREND LINE that supported gold for several years before it was broken (see figure 1 on the chart). After breaking below the support line, the gold market again tried to rally, but failed (you can see this in figure 2), which created a TWIN MOUNTAIN TOP. Once through (figure 3) the PIVOT POINT, it was all over for gold as it moved into a major bear market that has now lasted just over four years.

The big question is … has the bear market in gold come to an end? 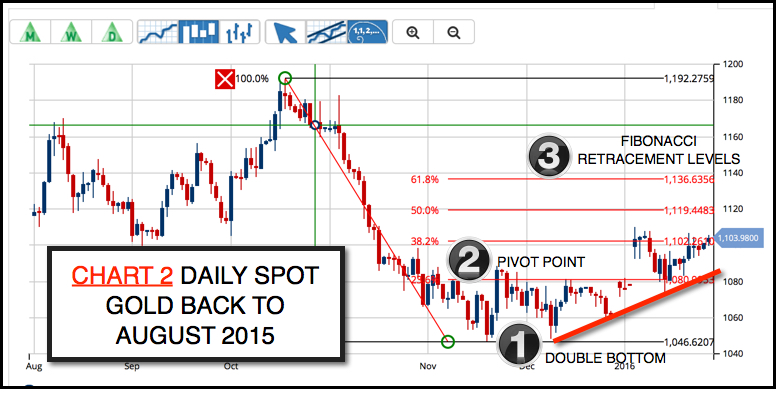 That brings us to the shorter-term time frame, looking at the daily spot gold chart going back to August 2015. This chart clearly shows that the gold market has been moving sideways for the past three months. In fact, when you look closer, the gold market created a DOUBLE BOTTOM in the November-December period of 2015 (see figure 1 on the chart). That DOUBLE BOTTOM was confirmed when the gold market jumped dramatically over the PIVOT POINT (see figure 2) indicating that gold had indeed put in, at least for the moment, a temporary bottom.

I have used the Fibonacci tool to indicate potentially where I believe the current rally in gold can move to (see figure 3).

To use the Trade Triangles successfully in gold, you need to use the weekly for trend and the daily Trade Triangle timing. This is what we have used in the World Cup portfolio and it works very well over time.

We are keeping our fingers crossed that the East Coast gets back to a little more normalcy by the middle of the week and that everything will be functioning like normal. When that happens, I will be able to create some new market videos for you.

6 thoughts on “Anatomy Of The Gold Market”