As the political cycle matures in 2016, the political posturing continues to plague the entire healthcare cohort. Utilizing the biotech sector and drug pricing as a scapegoat for political gains has translated into the sector posting sharp declines over the past year. Using the iShares Biotechnology Index ETF (PACF:IBB) as a proxy for the biotechnology sector, this cohort has fallen from $401 in July of 2015 to $240 in February of 2016 or alternatively a 40% decline. This sharp decline coincided with heated political rhetoric aimed at the collective cohort of healthcare and more specifically biotech-related companies. This cynical sentiment by political frontrunners was largely rooted in the pricing of drugs. It’s noteworthy to highlight that this specific segment of the industry (i.e. drugs) comprises less than 10% of the total cost of healthcare. As candidate threats via legislative action geared towards reining in the costs of drugs unfolded, these actions negatively reverberated through healthcare and biotech stocks alike. The political posturing surrounding potential plans to reign in drug costs are now largely priced into many stocks within the healthcare umbrella. I contend that after the roughly year-long political sell-off the biotech cohort looks attractive at these levels. Once the political cycle is complete later this year, these stocks will likely benefit from the mere absence of political headwinds. Taken together along with the difficulty of enacting any legislative action to regulate the industry this may represent a buying opportunity that’s been presented by extraneous political events.

It has been well publicized that Turing Pharmaceuticals and its former CEO (recently arrested by federal authorities), Martin Shkreli, garnered criticism after he boosted the price of their drug Daraprim from $13.50 to $750 per pill, resulting in a greater than 5,400% increase after acquiring the drug in August of 2015. This price gouging of a decades' old drug drew fire from the general public on social media and in particular, the presidential candidate and Democratic front-runner Hillary Clinton (Figure 1). This price gouging incident has elicited widespread backlash and in my opinion, rightfully so; however, this criticism has been unfairly painted with a broad brush across the entire sector. The latest victim of price gouging allegations is Valeant Pharmaceuticals.

“The company is called Valeant Pharmaceuticals,” “I’m going after them. This is predatory pricing, and we’re going to make sure it is stopped.”

Although Daraprim is an isolated and egregious example, at the end of the day, these companies are in business to make a profit, retain fiduciary responsibilities and return value to shareholders. Despite the public backlash and public statements by lawmakers, I believe this is a temporary headwind rooted in the public relations arena and to a large extent this is already priced into many stocks within the healthcare industry. Additionally, drugs comprise less than 10% of the total cost of healthcare in the United States. The rise in healthcare costs are attributable to many other factors not isolated to the pricing of drugs. Attempts to heavy regulate the sector with government intervention will likely end in a futile effort in arresting drug price increases for the following reasons:

1. It is estimated that companies spend on average $850 million on research and development alone to move a drug candidate compound through development to market launch. It is estimated that another $850 million on average is spent to brand and market their products. On average, companies spend $1.7 billion to bring a drug compound from R&D and into the market.

2. It also takes on average 10 years to bring a new chemical entity to the market – defined as the first toxicology study to first approval in a major market such as the U.S or E.U. With the increased regulatory framework and increasingly complex therapies this timeframe does not appear to be coming down.

3. These huge cost barriers must be factored into the pricing of the product in order for the company to remain in business and continue to advance and diversify their clinical pipeline in efforts to continue to provide more options to patients.

4. Unlike education costs, housing price increases, pensions and social security, drug pricing is negotiated with many insurers and organizations that dispense drugs at a substantial discount to the market price and often along with rebate programs. The list price is rarely if at all paid by anyone receiving the treatment.

5. Loss of exclusivity: drug companies must also capitalize on their window of exclusivity to their drug. Depending on patent expiration, after varying time on the market, patents will inevitably expire and these drugs will no longer possess exclusivity and face generic competition. This will depend on whether or not a traditional New Drug Application (NDA) or supplemental NDA is approved.

6. The federal government incentives companies to pursue unmet medical needs of small populations, typically in the tens of thousands via Orphan Drug status. Orphan drug status awards companies by securing drug exclusivity, research grants, waived user fees and tax credits. The exclusivity component under the Orphan Drug Act effectively guarantees a market monopoly for seven years once approved. No other drug is permitted to be approved which treats the same orphan indication.

7. An often overlooked benefit is the cost savings to the overall healthcare system. This occurs when curative drugs or drugs that increase the overall survival and/or improve the quality of life are introduced to the market. These highly effective drugs can effectively remove patients from the system, whereby eliminating years of high-cost medical treatment and hospitalization.

8. Lastly, this type of economic set-up and government incentives in the drug space are conducive to pro-business sentiment, investment in R&D, infrastructure investment, production of innovative treatments and high-tech growth creation. Disrupting the above paradigm will likely result in negative consequences to the many of the benefits conferred under the current system.

While drug prices continue to rise, there's substantive rationale in the form of input costs, loss of exclusivity, curative treatments, an increase in quality of life and removal of some patients from the overall healthcare system, thus reducing the overall cost burden to the healthcare system. Regulation would negate efforts set forth by the Orphan Drug Act, accelerated approval programs, the FDA Modernization Act and the fast-track drug approval program. Regulation would potentially disincentive companies from pursuing better treatment options or any unmet medical needs. For the reasons stated above, I personally feel that these attempts by lawmakers will end in a futile endeavor.

Despite the aforementioned political backdrop and negative sentiment being projected by some presidential frontrunners, according to the Centers for Medical and Medicaid Services, medical expenditures are projected to grow at an average rate of 5.8% per year through 2024. This translates into 1.1% faster than GDP throughout this time period. The healthcare expenditures as a percentage of GDP are expected to rise from 17.4% in 2013 to 19.6% by 2024. Healthcare spending is projected to have grown 5.5% in 2014, significantly outpacing economic growth. The greater spending on overall healthcare is mainly attributable to the Affordable Care Act (ACA) health insurance coverage and rapid growth in prescription drug spending. As a result of ACA, the domestically insured is projected to have increased from 86% in 2013 to 89% in 2014 as 8.4 million individuals are projected to have gained coverage. Post-2014, national health spending is projected to grow at a 5.3% clip in 2015 and peak at 6.3% in 2020.

Given these projections, this scenario bodes well for the overall healthcare sector as more individuals have access to health coverage and prescription drugs. Specifically regarding biotech and prescription drug expenditures, this area is projected to have grown 12.6 percent in 2014 to $305.1 billion. Driving this growth were new specialty drugs and increased prescription drug use among people who were newly insured. Prescription drug spending growth is projected to average 6.3% annual growth from 2015 through 2024. Taken together, as the biotechnology sector continues its innovation and continuous supply of medications to treat and cure many different diseases coupled with the growth in overall medical spending may present an investment opportunity for companies that provide the R&D and innovation for prescription drugs.

Will the secular growth story continue in biotech once the political headwinds subside?

The returns for IBB have been very impressive in both the long and short-term horizons, unparalleled by any major index. Over the past 10 year timeframes, IBB has posted cumulative returns of 220%. These results are unrivaled by any major index, outperforming on a 10-year cumulative basis of 166%, 115% and 167% for the S&P 500, Nasdaq, and Dow Jones respectively (figure 2). These returns are accentuated during the previous 5 years. IBB has cumulatively outperformed all indices by
roughly 2 to 4-fold over the 10-year timeframe (figure 2). 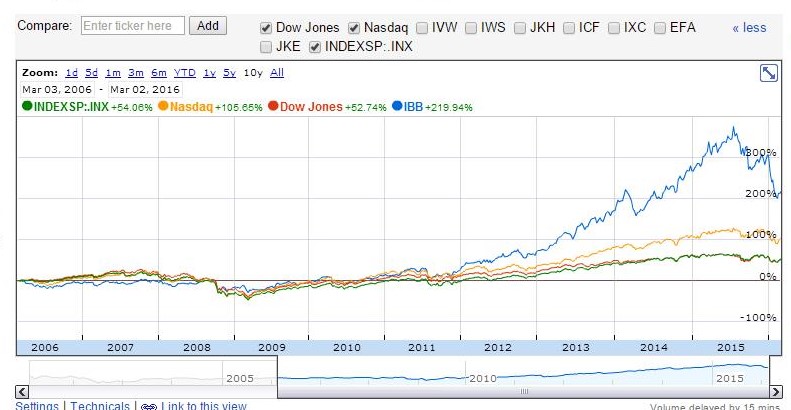 I posit that despite the negative political backlash garnered throughout 2015 and thus far in 2016, IBB has a great track record as a true secular growth story and doesn't fit the mantra of high-risk high-reward based on annual performance throughout both bull and bear markets. In 2015, IBB once again defied the market returning over 13% and outpacing all major indices handily. Data suggests, provided a long-term position that volatility in IBB is negated by its long-term performance that is unparalleled by any index. This sector ETF provides high returns unrivaled by any major index with moderate risk (based on its resilience during the bear markets of 2008, 2011 and 2015) and volatility. IBB may serve as a great satellite holding for any long portfolio desiring exposure to the biotechnology sector with a long-term time horizon moving into 2016.

Disclosure: The author currently holds shares of IBB and the author is long IBB. The author has no business relationship with any companies mentioned in this article. He is not a professional financial advisor or tax professional. This article reflects his own opinions. This article is not intended to be a recommendation to buy or sell any stock or ETF mentioned. Kiedrowski is an individual investor who analyzes investment strategies and disseminates analyses. Kiedrowski encourages all investors to conduct their own research and due diligence prior to investing. Please feel free to comment and provide feedback, the author values all responses.