HealthEquity (HQY) is an undervalued and underappreciated stock that is a buy at the sub $50 level. The stock is hovering just above its COVID-19 lows despite the epic market rally. HealthEquity (HQY) has fallen from its 52-week highs of $89 to a low of $35 or 60% during the COVID-19 market meltdown. The recent sell-off in equities has resulted in a 20% dive moving from $61 to $48. This sell-off presents a great opportunity for this healthcare cost containment company.

Considering HealthEquity’s unique position as being distinctly disassociated from drug pricing issues, rising insurance costs, or the pharmaceutical supply chain, this sell-off is a great opportunity for an entry point. HealthEquity is in a strong position and being offered at a heavy discount. For long-term investors, HealthEquity presents a compelling picture of growth with a large addressable market moving forward and further strengthened with its acquisition of WageWorks. 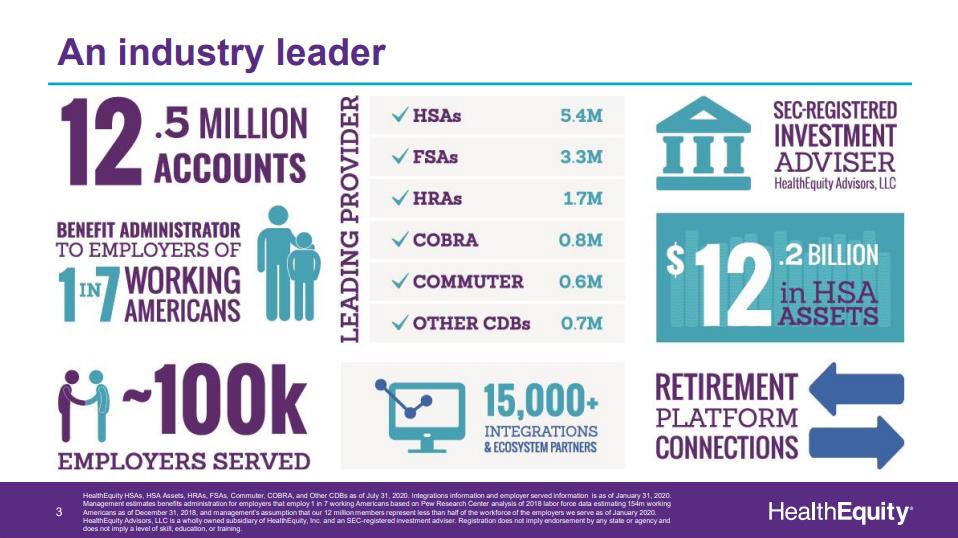 CVS Health (CVS) wasn't immune from the market declines that were inflicted by the COVID-19 downturn. Despite being in the traditional defensive healthcare space and confined to domestic operations, the stock has not been able to break out and participate in the broader raging bull market post-CVOID-19 lows. The combination of CVS Health (CVS) and Aetna was proving to be a success after initial skepticism by investors. CVS even posted a string of better than expected quarters in part attributable to the Aetna acquisition. CVS is generating large amounts of free cash flow, paying down debt, and returning value to shareholders in a variety of ways. To further boost long-term growth prospects, restore growth, and fend off potential competition, CVS combined with Aetna. This combination creates the first through-in-through healthcare company, combining CVS's pharmacies and PBM platform with Aetna's insurance business. The new CVS combines its existing pharmacy benefits manager (PBM) and retail pharmacies with the second-largest diversified healthcare company.

CVS has been in a perpetual stock slump with or without COVID-19 in the backdrop. CVS has been beaten down for years, plummeting by over 50% ($113 to $52) from its multi-year highs. The stock currently sits at a bleak ~$58 per share and struggling to hold on to any share price appreciation despite the positive string of recent earnings with plenty of runway left in its growth from its Aetna acquisition. This was a bold and hefty price tag to pay yet necessary to compete in the increasingly competitive healthcare space, changing marketplace conditions, and political backdrop with drug pricing pressures. CVS made a defensive yet necessary acquisition to enable the company to go back on the offensive. At current levels, CVS presents a compelling investment opportunity; however, it has been a value trap for years despite the company still being in the early stages of its CVS-Aetna combination, which will drive shareholder returns for years to come.

The pharmaceutical supply chain cohort, specifically CVS, has been unable to obtain a firm footing in the backdrop of consolidation within the sector, negative legislative undertones, drug pricing pressures, rising insurance costs, and a market that has lost patience with these stocks. These factors culminated in sub-par growth with a level of uncertainty as the sector continued to face headwinds from multiple directions. Many of the stocks that comprised this cohort presented compelling valuations in a very frothy market. This allure had been a value trap as these stocks continued to disappoint. It's no secret that these companies have been faced with several headwinds that have negatively impacted the growth and the changing marketplace conditions have plagued these stocks. END_OF_DOCUMENT_TOKEN_TO_BE_REPLACED

A total of 99 option trades were executed in May, June, July, and August as the markets reached an inflection point and rebounded after the COVID-19 lows. During this timeframe, all 99 trades were winning trades to lock-in a 100% option win rate with an average income per trade of $180 and an average return on investment (ROI) per trade of 7.4%. After the tumultuous market lows of March and into early April, leveraging a minimal amount of capital, mitigating risk, and maximizing returns are essential. An option-based portfolio can offer the optimal balance between risk and reward while providing a margin of downside protection with high probability win rates. As the market continues to rebound, optimal risk management is essential when engaging in options trading as a means to drive portfolio performance.

Through the end of August, an option-based portfolio broken out into roughly three parts of ~40% cash, ~30% long equity, and 30% options matched the S&P 500 performance, posting returns of 35.1% and 35.4%, respectively. Risk mitigation needs to be built into each trade via risk-defining trades, staggering options expiration dates, trading across a wide array of uncorrelated tickers, maximizing the number of trades, appropriate position allocation, and selling options to collect the premium income. Maintaining disciple via continuing to risk-define trades, leveraging small amounts of capital while maximizing return on investment, is essential despite the impressive streak of 80 consecutive winning trades.

And just like that, the S&P 500, Nasdaq, and Dow Jones hit their all-time highs, and the COVID-19 market sell-off had been erased. Just before the COVID-19 pandemic struck the markets, Ray Dalio was recklessly dismissive of cash positions, stating "cash is trash." Even Goldman Sachs proclaimed that the economy was recession-proof via "Great Moderation," characterized by low volatility, sustainable growth, and muted inflation. Not only were these assessments incorrect, but they were ill-advised in what was an already frothy market with stretched valuations prior to COVID-19. I'm sure Ray Dalio quickly realized that his "cash is trash" mentality, and public statements were imprudent. The COVID-19 pandemic has been a truly back swan event that no one saw coming. This health crisis has crushed stocks and decimated entire industries such as airlines, casinos, travel, leisure, and retail with others in the crosshairs.

The S&P 500, Nasdaq, and Dow Jones shed over a third of their market capitalization at the lows of March 2020. Some individual stocks lost over 70% of their market capitalization. Other stocks had been hit due to the market-wide meltdown, and many opportunities were presented as a result. Investors were presented with a unique opportunity to start buying stocks and take long positions in high-quality companies. Throughout this market sell-off, I started to take long positions in individual stocks, particularly in the technology sector and broad market ETFs that mirror the S&P 500, Nasdaq, and Dow Jones. It was important to put this black swan into perspective and see through this crisis on a long term basis while viewing COVID-19 as an opportunity that only comes along on the scale of decades.

Most Extreme and Rare Sell-Off Ever

The abrupt and drastic economic shutdown and velocity of the U.S. market's ~30% drop within a month bring parallels to the 1930s. This sell-off was extreme and rare in its breadth, nearly evaporating entire market capitalizations of specific companies. The pace at which stocks dropped from all-time highs was the fastest in history. The major averages posted their worst week since the financial crisis (Figures 1 and 2). The Dow had its worst month since 1931, and the S&P had its worst month since 1940. END_OF_DOCUMENT_TOKEN_TO_BE_REPLACED

Facebook Inc. (FB) faced a very public onslaught of companies joining an advertising boycott across its social media platforms. However, its latest earnings suggest that this effort may have been largely symbolic and effectively inconsequential to the company’s revenue and growth numbers. The advertising boycott had grown to roughly a thousand groups and multinational companies. This presented a unique challenge that still has the potential to weigh heavier on the company since this boycott will directly impact revenue as overall compliance/security expenses swell. The magnitude of this boycott may inevitably influence the stock price if this movement expands in sheer numbers and duration. If Facebook can appease advertisers in a timely fashion, then this may be a temporary challenge as these companies rejoin the social media platforms. However, as advertising spending is abandoned indefinitely until further notice due to this boycott and overall spend slows due to COVID-19, this culmination could cast uncertainty around its stock valuation. Even though over 1,000-plus brands have fled its platforms, Facebook has an advertising moat. The breadth and depth of its advertising partners go far beyond this collection of ~1,000 groups and companies, which translates into only X% while the company still grew its revenue by 11% in Q2.

These are blow out numbers across the board, and as expected, Facebook said that its user growth reflects increased engagement from consumers who are spending more time at home. Facebook has 3.14 billion monthly users across its platforms (Instagram, Messenger, and WhatsApp), compared to 2.99 billion in the previous quarter. The company forecast revenue growth for the third quarter of about 10%, beating analysts’ expectations for growth of 7.9% (Figure 1).

Better yet, Facebook said that through the first three weeks of July, its year-over-year revenue growth was about 10%. This forecast, while topping projections, takes into account ongoing headwinds, including economic volatility, the ad boycott, regulations around ad targeting and Apple’s upcoming iOS 14 operating system. END_OF_DOCUMENT_TOKEN_TO_BE_REPLACED