Disney offers an array of world renowned franchises (Star Wars, Pixar, Marvel, ESPN and the Disney offerings) that offer a deep and well-diversified product portfolio. This portfolio gives rise to a basket of entertainment income streams via movies, licensing deals, theme parks, TV programing, resorts and distribution rights. Disney stock has been under pressure as of late due to increasingly worrisome revenue declines from the ESPN franchise. I feel this decline in the stock is unwarranted and analysts underestimate the ability of Disney to evolve to the consumer and monetize ESPN via other means. The generational penetration of the Star Wars, Marvel, Pixar and the legacy Disney franchises are being underestimated and undervalued. Disney has witnessed fantastic growth over the last decade and considering future catalysts in the pipeline; Disney appears undervalued. Disney currently sits at a P/E of 18 along with a PEG of 1.5 and has seen its stock fall from $122 to a current price of $96 or alternatively a 21% decline. This presents a great buying opportunity in an inexpensive, high-quality growth stock.

Disney has a rich pipeline with Star Wars themed parks, Star Wars movies, the opening of Disney Shanghai, Marvel movies, Pixar movies and future Disney movies such as Finding Dory to highlight a few. The deep movie portfolio and distribution schedule is highlighted below (Figure 1).

The strength of this movie line-up is easily in the billions of dollars just in theatrical release not to mention the licensing deals for product related sales and spinoffs for future releases. Disney Shanghai is set to open later this year and estimates are $3.7 billion – $6.2 billion in annual revenue with up to 50 million visitors per year. Considering its rich pipeline of movies, future theme park opening and legacy revenue from other segments, Disney appears well positioned for future growth.

Disney has delivered impressive earnings over the past decade which was highlighted by the most recent quarterly report (Figure 2). Despite the record numbers, analysts have been fixated on the ESPN woes and the drop in its cable network and broadcasting segments (Figure 3).

“Driven by the phenomenal success of Star Wars, we delivered the highest quarterly earnings in the history of our Company, marking our 10th consecutive quarter of double-digit EPS growth,” said Robert A. Iger, Chairman and Chief Executive Officer, The Walt Disney Company. “We’re very pleased with our results, which continue to validate our strategic focus and investments in brands and franchises to drive long-term growth across the entire Company.” 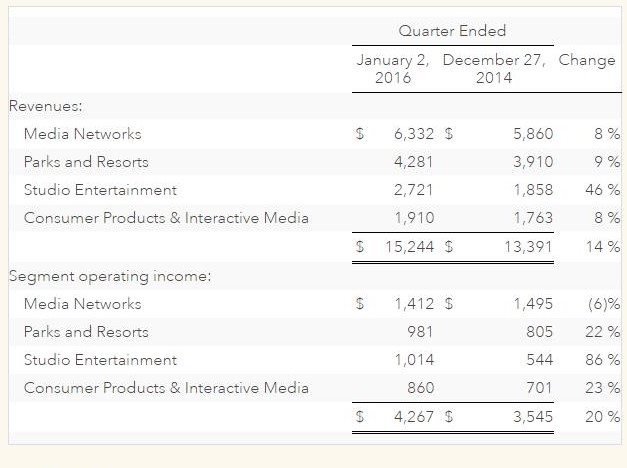 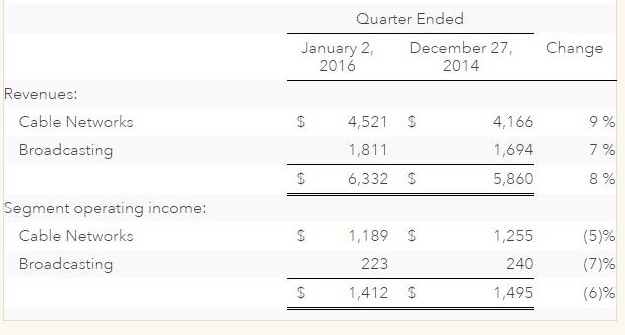 “The decrease at ESPN was due to higher programming costs, partially offset by an increase in advertising and affiliate revenues. Results for the quarter were negatively impacted by the timing of our fiscal quarter end relative to when College Football Playoff (CFP) bowl games were played, which resulted in an increase in programming costs and advertising revenues. Six CFP games were aired in the current quarter that were aired in the second quarter of the prior year. Increased programming costs due to the CFP games as well as contractual rate increases for NFL and college football programming were partially offset by the absence of rights costs for NASCAR. Higher advertising revenue was due to an increase in units sold and higher rates, both of which benefited from the CFP. Affiliate revenue growth was due to contractual rate increases, partially offset by a decline in subscribers and unfavorable foreign currency translation impacts.”

As Disney prepares to announce Q1 2016 results and considering the above timing of ESPN broadcasting and Disney looking to monetize ESPN via alternative means, I’ll be looking for a capitulation in the ESPN decline and further acceleration in other segments.

Disney has historically been a shareholder friendly company paying out dividends and purchasing shares via an aggressive share buyback program. Disney has recently moved from paying an annual dividend to a semi-annual dividend payout schedule. The company currently pays out $1.42 per share which translates into a 1.5% yield at current prices. Disney has a long history of increasing the annual dividend payout over time. Disney committed to buying back $6-$8 billion worth of stock in 2014 and has been buying back shares rather aggressively during periods of weakness. Disney spent $5.6 billion in fiscal 2015 to buy back company stock and they have earmarked another $6-$8 billion for fiscal 2016. These two attributes will further drive shareholder value and EPS into the future.

Disney represents great value with a rich pipeline of products and sustainable revenue stream from a variety of global franchises. Disney stock has been wrongly punished for revenue and income declines from the ESPN franchise. I feel that Disney will circumvent this ESPN specific issue and look to ways at evolving the offering (streaming via Sling TV) to the consumer and monetize ESPN via other means. The wildly successful franchises of Star Wars, Marvel, Pixar and the legacy Disney line are being unappreciated. Disney has witnessed fantastic growth over the last decade and considering future catalysts in the pipeline; Disney appears undervalued at current levels. This presents a great buying opportunity in an inexpensive, high-quality growth stock that may not last much longer.

Disclosure: The author holds shares of DIS and is long DIS. The author often adds to his long position by buying on major dips in the stock price. The author has no business relationship with any companies mentioned in this article. He is not a professional financial advisor or tax professional. This article reflects his own opinions. This article is not intended to be a recommendation to buy or sell any stock or ETF mentioned. Kiedrowski is an individual investor who analyzes investment strategies and disseminates analyses. Kiedrowski encourages all investors to conduct their own research and due diligence prior to investing. Please feel free to comment and provide feedback, the author values all responses.