Ministers from eleven Non-OPEC oil producing countries, led by the Russian Federation, met at OPEC’s headquarters in Vienna on December 11th. It had been reported for weeks that they would agree to cut their oil production by 600,000 b/d.

What they actually agreed to was a watered-down version of that. It turned out that they did not get to 600,000, that much of the “cut” was due to a natural decline in certain countries, such as Mexico, that Russia’s 300,000 b/d cut would be gradual over the first six months of 2017, and that it was all voluntary.

The key portion of the press release reads as follows:

“Azerbaijan, Kingdom of Bahrain, Brunei Darussalam, Equatorial Guinea, Kazakhstan, Malaysia, Mexico, Sultanate of Oman, the Russian Federation, Republic of Sudan, and Republic of South Sudan commit to reduce their respective oil production, voluntarily or through managed decline, in accordance with an accelerated schedule. The combined reduction target was agreed at 558,000 barrels a day for the aforementioned producers."

Following the meeting, OPEC held a press conference. Saudi energy minister, Khalid A. Al-Falih, shared some of his thoughts about oil prices and the Saudi position on cuts.

He stated that no one on the planet can predict oil prices and that they will be set by the market. He expects an equilibrium price to be discovered in 2017 that is higher than prices have been in 2016, but lower than $100+ in 2014. He commented that prices are too low to meet budgets of the oil exporting countries. It is well-known that for Saudi Arabia’s budget to balance, it requires oil prices in the $60s.

He said that KSA would reduce its production to its ceiling. However, he added that if the futures market should become backwardated, oil firms and traders might reduce oil inventories, reducing their demand for crude purchases. In that event, demand for Saudi crude could fall below its production ceiling, and Saudi Aramco would reduce production accordingly.

That bit of news was apparently what caused the price spike Sunday evening when futures trading resumed. Prices initially opened about $2.50 higher but closed on Monday just over $1/b higher.
The market’s reaction has been overly-optimistic, in my opinion. The futures price strip does not go into backwardation until late 2017. That is when the market expects supply-demand to balance, based on economic theory. In the months throughout 2016, it is currently in a contango pattern.

There is also a major risk that OPEC will not hold production to its ceiling of 32.5 million barrels per day (mmbd). First, the cuts reported by OPEC gets it down to 32.7 mmbd. Second, Nigeria and Libya were exempt from cutting because both countries are in the process of restoring their petroleum industries and will not cut. But there is no “effective mechanism” for the remaining OPEC countries to cut their production if output from Nigeria and Libya is restored, and that could amount to around 1.5 mmbd, if they reach their production goals in 2017.

Already in November, they had increased production by 140,000 b/d. And Libya is saying it will add another 300,000 b/d by the end of December by “liberating” production from its western oil fields.

Mr. Al-Falih was also asked what reaction American shale oil production would have. He stated that because of “significant lags,” he did not expect to see production to rise in 2017, despite the upturn in rig counts.

What he may be missing on this score is that President-elect Trump has set the restoration of oil production as a high priority to achieve energy independence. And he wants the industry to restore millions of jobs that have been lost. Therefore, he is likely to establish new incentives to increase American oil production.

In the latest report by the Commodity Futures Trading Commission (CFTC), its figures of short hedges by producers rose to the highest level since 2010 (see graph). This occurred in reaction to the spike in prices following the OPEC meeting on November 30th. 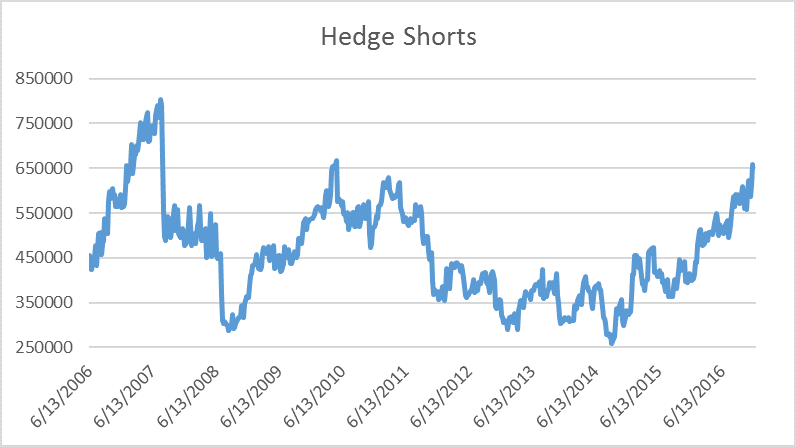 The Russian energy minister, Alexander Novak, said that oil prices would be $20/b lower than the $50-$55/b range if the agreements fail. He was asked what oil prices would do in 2017, and he said that prices are usually unpredictable. However, he added that current prices are comfortable for both producers and consumers, and “we’re fine with that.” Russia’s budget is based on $40 oil, he said in a Video interview.

And so I don’t think Russia will call for more cuts unless the ones announced do not stabilize prices. Furthermore, it remains to be seen whether all OPEC and non-OPEC cuts will actually materialize. If prices hold or rise, individual countries have the incentive to maximize their own production to earn as much revenues as possible.

The rise in oil futures prices we have seen since the OPEC meeting reflects expectations of net cuts. That is far from guaranteed, given the facts above. And I am highly skeptical of these deals. With the meetings out of the way, the market will return focus on actual supply and demand news. The proof will be in the pudding.