In this post I would like to share with you the analysis of the stocks with a name starting with letter “B”. There are more stocks to choose from this time, according to the earlier mentioned filter criteria. Four stocks were shortlisted this time as they have clearer chart structure, but only two stocks reached the “well done” level. I witnessed again and again that U.S. stock market offers a lot of opportunities for investors and traders.

Table 1. Selected stocks for letter B

Out of 24 filtered stocks I picked only four as they have clear chart structure: BBBY, BGCP, BWA and BYD. BBBY is oversold and has the potential for the long trade setup, but one should wait for the breakout of the multi-month downtrend, and try not to guess the bottom, which is always risky. Others have potential short trade setups. BYD, like BBBY is also not ready and continues upside. As I told you many times before, we shouldn’t be biased. I am neither a Permabear nor a Permabull, however only short setups have appeared recently on the chart radar.

We are lucky to catch this stock as it’s almost touched the long-term horizontal resistance (red dashed line) labeled with the letter C. The stock price of BGC Partners, Inc. (NASDAQ:BGCP) has been trapped within a giant range between the $12.97 and $1.37 marks. The BGCP hasn’t been at the current level for almost 10 years after it dropped heavily in 2008 from it’s $12.97 peak, this fall is labeled as the AB segment. This time the price topped 28 cents below the previous maximum (2008) at the $12.69 mark.

The last time we saw such chart structure, I gave it the special name “LULU-type” and now you know why. I expect the price to repeat the move of the AB segment in the CD segment downside to the previous major low at the $1.37 level. It’s more than a $10 gain per share.

There are several technical factors supporting the sell setup. Firstly, we have a double resistance at the top of the range, which consists of a red dashed horizontal resistance from the previous major top and the upside of the gray uptrend channel, which isolates the current countertrend move. Secondly, there is supporting downside price action, which shows itself in the shape of the current month’s candle. It has a long upper shadow as the price dropped back to the opening level from the peak. This candle shape is called a Gravestone Doji and it’s a reversal candlestick. We should know it for sure at the end of the month when the candle will finally be shaped.

Risk takers are already in as they sell into resistance. Confirmation based traders would wait when the price breaks below the blue support trendline.

Let’s look into performance indicators of BGCP below and see if it supports the short.

So there is again, as in the first post nothing extremely menacing about the company’s value. Let’s look once again at the technical picture – for just one year from 2008 till 2009 the stock price lost almost 90% of its price. Then we have a 10 year long correction and then the price reached the area of the previous top the sellers this month. It appears that the sharks smelled blood and pushed BGCP down 6% already month-to-date. Maybe, we just don’t know all the facts, which put the pressure on the price already. And the last thing – often proof is revealed after the stock price makes a big move. 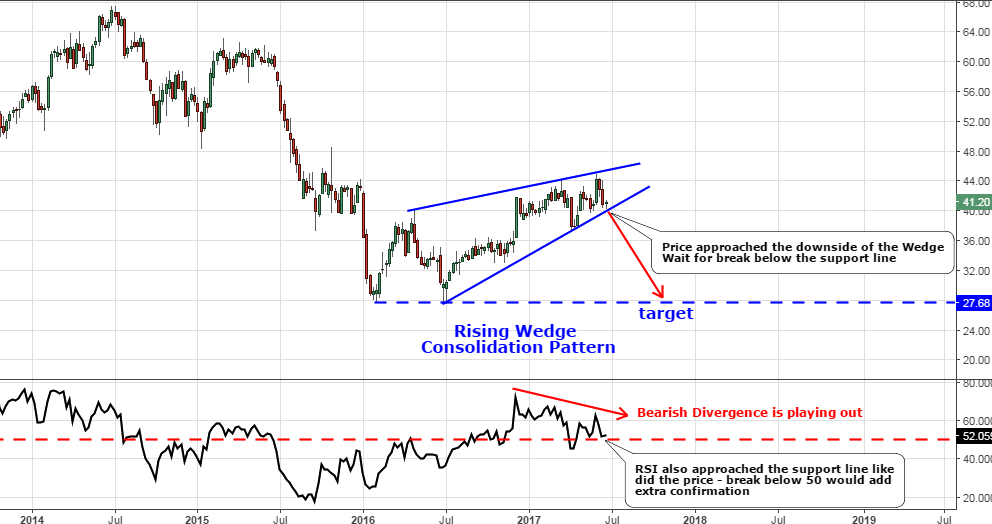 The stock price of BorgWarner Inc. (NYSE:BWA) is consolidating within the blue Rising Wedge pattern after a huge drop from the $63 level down to the $28 area in 2015-2016. And again, it’s our luck to have the price at the decision point as it reached the downside of the pattern and could test it quite soon.

After the support is broken the price could reach the previous low at the $27.68 mark, and that is just a conservative target.

The RSI indicator supports the sell setup as it shows a Bearish divergence with the price with lower tops versus the higher peaks on the price chart. Besides that, it also reached the decision point (50 level) as did the stock price approaching the downside support. A break below the 50 level would coincide with the break of the support by the stock price.
Let’s see the performance indicators of BWA below to see if they support the sell setup.

I counted now more pros than cons for a short position. I am not surprised as the downtrend in this stock is mature and it already reflects the negative aspects of the business and the short float ratio confirms that the market already knew the troubles of this stock.

One thought on “Stock Analysis From A To Z: Letter "B"”