The Biotechnology cohort has finally broken out and reached a 52-week high while making up much of the lost ground during the pummeling from both sides of the political aisle during the 2016 presidential race. Tweets and excerpts from the campaign trail from Hillary Clinton, Bernie Sanders, and Donald Trump put the biotech cohort through the wringer via taking aim at drug pricing. The sustained sell-off lead to the entire cohort to sell off from all-time highs of $132 to $83 or 37% in only six months as measured via the iShares Biotechnology Index ETF (IBB). From February of 2016 through June of 2017 IBB traded in a tight range from $83 to $98 while Donald Trump continually fired shots against the healthcare sector. Any healthcare related stocks became volatile on the heels of any statement or tweet from Donald Trump. Shortly after the inauguration, Trump stated that drug companies are “getting away with murder” when speaking to the drug pricing issue. The previously proposed healthcare legislation never materialized thus a level of certainty has entered the picture, and the drug pricing threats are not perceived to be as bad as initially feared. Recently the index has had a resurgence moving to a 52-week high of $118 with a much clearer runway ahead as the political headwinds continue to abate. As the confluence of abating political threats, drug pricing certainty, merger, and acquisition activity ramps and continuity of the current health care backdrop, I feel the index has room to continue its upward trend and retrace its 2015 level of $130.

AbbVie (ABBV) reported Q4 numbers that beat expectations and updated guidance above consensus estimates for 2018, and as a result, the stock moved up 14%. This earnings announcement stroked the entire biotech cohort and had pumped more life into the group that has seen a steady rise leading up to this statement. Other large-cap companies that have plenty of upside based on its multi-year highs include Celgene (CELG) which is off 35%, Regeneron (REGN) which is off 31% and Gilead (GILD) which is off 29% based on current prices. Even specialty pharma Allergan (AGN) is off a staggering 43% as well. All of these names may be due for a resurgence if quarterly results beat and guidance is raised similarly as AbbVie.

After a banner year in 2015 for the biotech ETF, the cohort sold off in a dramatic fashion falling from $138 to $89 or a 37% drop. The healthcare sector had been faced with an uncertain and volatile political backdrop. As President Trump vowed to bring down drug prices, iShares Biotechnology Index ETF (IBB) found its footing and set a floor near the $89 level. The ~$90 level has tested a handful of times in 2016, and it was evident that many of these political threats were being priced-in after its sharp and sustained sell-off. This sharp decline and subsequent floor coincided with heated political rhetoric aimed at the collective cohort of healthcare and more specifically biotech companies. I strongly felt that these events were extraneous and would eventually subside without any significant impact on the underlying stocks within IBB. I felt this politically induced sell-off presented a great buying opportunity considering the ~40% decline and external pressures. I had written about such opportunities throughout 2016 during the market sell-off and the Brexit, respectively (Figure 1). I felt that these were excellent entry points for any long-term investor that desired exposure to the biotechnology sector. Ostensibly, many of these stocks were trading at multiyear low P/E ratios and as a cohort (gauged via the IBB proxy) looked to be less sensitive to tweets/threats as IBB continued to test the ~$90 barrier throughout 2016. 2017 saw some recovering and posted a 21% gain, and now 2018 is off to a fantastic start with much more potential ahead. 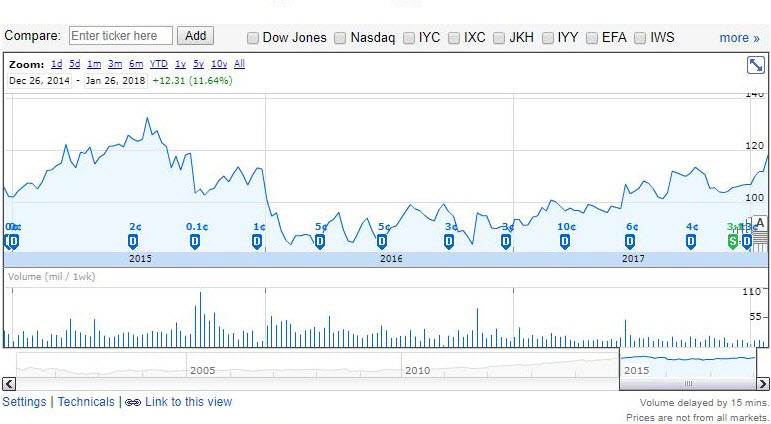 The M&A catalyst is very much in play as the broader biotech cohort remains at depressed valuations compared to 2015 highs. The most noteworthy acquisition as of late was Gilead’s (GILD) purchase of Kite (KITE) for $11.9 billion. Repatriation of overseas assets and decreases in corporate taxes are very much in play and could serve as a catalyst for M&A and a tailwind for the industry. This is especially true regarding Celgene’s (CELG) recent acquisition of Juno Therapeutics (JUNO) for $9 billion in an all-cash offer.

“US tax reform enables improved visibility into after-tax cash flows and access to ex-US cash to fund the transaction.”

The political stance on M&A activity seems to be favorable with the new administration. Potential additional repatriation of overseas assets decreases in corporate taxes, and the loosening of M&A pushback may bode well for the industry in the intermediate term. Despite the current uptick in IBB, many prospective buyout candidates with beaten down valuations in concert with appealing pipelines remain. As this acquisition activity heats up, be on the lookout for stocks that have been rumored as takeover targets to heat up and possibly take IBB along for the ride.

Throughout 2016 and moving into 2017 some industry leaders formed a consortium to cap drug pricing increases voluntarily. Industry leaders aimed to get out in front of this drug pricing debate and articulate discipline in future increases while providing transparency on past price increases. This effort was to separate themselves from a handful of egregious price increases to contend with Trump’s aim at the drug companies. A select handful of companies were being used as a proxy for the entire industry. This consortium aimed to dispel this common misconception about drug price increases. This seems to have been an effective checkmate to the new administration and its efforts towards lowering drug prices and erroneously accusing companies and labeling them as price gougers. A group of prominent pharma companies (domestic and foreign) is unofficially banding together to address the price increases that the public and government officials have been angered over. Allergan (AGN), J&J (JNJ), Novo Nordisk (NVO) and AbbVie (ABBV) have committed to limiting any annual drug pricing increases to less than 10%. J&J went further and published an annual report regarding its portfolio and the price increases they’ve implemented. Merck (MRK) becomes the latest pharma to join this drug pricing transparency coalition.

As of recent, any proposed modified healthcare bill has been completely killed in Congress. However, ostensibly at first pass, the proposed healthcare legislation was perceived as favorable for the entire biotechnology cohort, specifically about drug pricing. The Trump administration’s attempt to reign in drug prices may not be as harmful as feared initially per an NY Times report. This report cited a draft of an executive order on drug pricing that appears to focus on easing regulatory hurdles for the industry and “largely leaves the drug industry unscathed.” This is a far departure from all the strong rhetoric on the campaign trail from Donald Trump. Regardless, continuity of the current healthcare framework provides certainty throughout the industry. Further, as the drug pricing paradigm remains largely intact along with the drug pricing coalition effectively self-governing, this cohort will be less constrained and allow to rise.

iShares Biotechnology Index ETF (IBB) has finally notched a 52-week high and has made up much of the lost ground during the pummeling from both sides of the political aisle during the 2016 presidential race. After its ~40% slide over this period, IBB began to demonstrate its resilience in the face of Donald Trump as he continuously threatened to overhaul drug pricing. The ~40% sell-off, newly formed drug pricing consortium, political threats abating, recent merger and acquisition activity and the freshly proposed health care legislation being defeated is providing an ideal environment for the biotech cohort to appreciate. The drug pricing debate has been put to further rest with certainty surrounding the continuity of the current healthcare landscape thus a much clearer runway is ahead for the cohort. I feel that the cohort has plenty of room to appreciate considering large-cap names such as Celgene (CELG), Regeneron (REGN) and Gilead (GILD) remain far off their respective highs.

Disclosure: The author does not currently hold shares of IBB, however the author owns shares of Allergan, Celgene, Gilead and Regeneron. The author has no business relationship with any companies mentioned in this article. He is not a professional financial advisor or tax professional. This article reflects his own opinions. This article is not intended to be a recommendation to buy or sell any stock or ETF mentioned. Kiedrowski is an individual investor who analyzes investment strategies and disseminates analyses. Kiedrowski encourages all investors to conduct their own research and due diligence prior to investing. Please feel free to comment and provide feedback, the author values all responses. The author is the founder of stockoptionsdad.com a venue created to share investing ideas and strategies with an emphasis on options trading.