The iShares Nasdaq Biotechnology ETF (IBB) which serves as a proxy for the biotechnology cohort has finally broken out to a 52-week of $122 against its 52-week low of $100 in May. This 20%-plus appreciation over the summer has largely gone unnoticed while some individual companies have soared even higher over this same period. The biotechnology cohort has been decimated over the past 2-plus years over the drug pricing debate while serving as a political punching bag. To be fair, the entire pharmaceutical supply chain became a victim of harsh political rhetoric as share prices fell across all companies involved in this space in any capacity. The biotechnology cohort has been largely ignored in this massive bull market and appears relatively cheap in comparison to other sectors. As the confluence of abating political threats, drug pricing certainty, merger and acquisition activity and continuity of the current health care backdrop, this cohort has witnessed a stealth bull market. This uptrend is likely to have legs as valuations remain compelling and many names have become value stocks.

Furthermore, as the raging bull market continues into frothy territory, downside risks continue to mount. Bank of America is predicting an end to the current bull market run and in less certain times pharma companies will benefit. Individual names within the sector have demonstrated incredible strength as of recent such as Regeneron (REGN), Bristol Meyers (BMY), Allergan (AGN), Celgene (CELG), Johnson & Johnson (JNJ) and Amgen (AMGN).

After a banner year in 2015 for the biotech ETF, the cohort sold off in a dramatic fashion falling from $138 to $89 or a 37% decline. The healthcare sector had been faced with an uncertain and volatile political backdrop. As President Trump and other political pundits vowed to bring down drug prices and increase scrutiny over the sector, IBB found its footing and set a floor near the $89 level. The ~$90 level was tested a handful of times in 2016, and it was evident that many of these political threats were being priced-in after its sharp and sustained sell-off. This sharp decline and subsequent floor coincided with heated political rhetoric aimed at the collective cohort of healthcare and more specifically biotech companies. I strongly felt that these events were extraneous and would eventually subside without any significant impact on the underlying stocks within IBB. I felt this politically induced sell-off presented a great buying opportunity considering the ~40% decline and extraneous pressures. I had written about such opportunities throughout 2016 during the market sell-off and the Brexit, respectively (Figure 1). I felt that these were great entry points for any long-term investor that desired exposure to the biotechnology sector. Ostensibly, many of these stocks were trading at multiyear low P/E ratios and as a cohort (gauged via the IBB proxy) looked to be less sensitive to tweets/threats as IBB continued to test the ~$90 barrier throughout 2016. 2017 saw a nice recovery and posted a ~20% gain, and 2018 is shaping up to posting another double-digit annual return thus far the index is up ~14% YTD. Biotechnology remains one of the few sectors that money has yet to rotate into now that retail has caught fire.

Many large-cap companies within the sector have demonstrated tremendous strength over the previous few months yet still have plenty of upside based on its multi-year highs. These names include Regeneron (REGN), Bristol Meyers (BMY), Allergan (AGN), Celgene (CELG), Johnson & Johnson (JNJ) and Amgen (AMGN) (Figure 2). 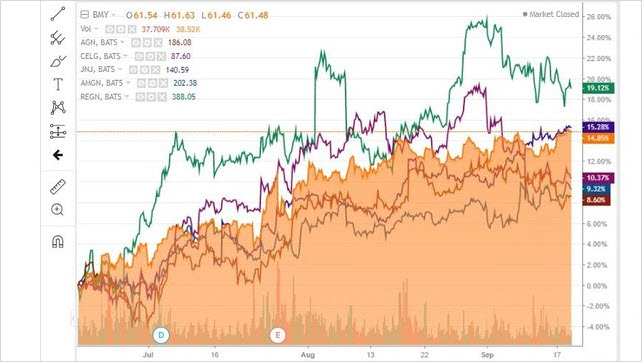 Recently, Michael Hartnett, chief investment strategist at Bank of America is predicting that the “Great Bull” market is dead as economic growth becomes less certain, interest rates rise, and debt becomes an overhang. Hartnett advised investors to focus on “inequality, innovation and immortality,” that would benefit pharma companies and technology disruptors along with inflation plays. Furthermore, he added that interest rate hikes would have a significant impact on growth that may not be anticipated in the market.

During the political turmoil on drug pricing, industry leaders formed a consortium to voluntarily cap drug price increases. Industry leaders aimed to get out in front of this drug pricing debate and articulate discipline in future increases while providing transparency on past price increases. This effort was to separate themselves from a handful of egregious price increasers to contend with political aims at the drug companies. A select handful of companies were being used as a proxy for the entire industry. This consortium aimed to dispel this common misconception with regard to drug price increases. A group of big pharma companies (domestic and foreign) has unofficially banded together to address the price increases that the public and government officials have been angered over. Allergan (AGN), Johnson & Johnson (JNJ), Novo Nordisk (NVO), Merck (MRK) and AbbVie (ABBV) have committed to limiting any annual drug pricing increases to less than 10%. J&J went further and published an annual report regarding its portfolio and the price increases they’ve implemented.

Despite all the harsh rhetoric directed towards the drug makers, empty threats have only materialized on the national level. After two years into office, the new administration has yet to tackle this alleged drug pricing issue while attempts in California to rein in pricing failed to become law. Trade war, tariffs, defense, infrastructure, financial regulation overhaul, tax reform, and immigration appear to have displaced this issue thus the political threat has abated.

The biotechnology cohort as measured via IBB recently touched a 52-week high and had made up much of the lost ground during the pummeling from both sides of the political aisle during the 2016/2017 political headwinds. The drug pricing consortium, political threats abating, recent merger and acquisition activity and the newly proposed health care legislation being defeated is provided an ideal environment for the biotech stealth bull market. This uptrend is likely to have legs as valuations remain compelling and many names have become value stocks. Furthermore, as the raging bull market continues into frothy territory, downside risks continue to mount. Moving forward in less certain times pharma companies will benefit per Bank of America. Individual names within the sector have demonstrated incredible strength as of recent such as Regeneron (REGN), Bristol Meyers (BMY), Allergan (AGN), Celgene (CELG), Johnson & Johnson (JNJ) and Amgen (AMGN). These names remain compelling relative to growth rates, pipeline and relative to their respective 52-week highs.

Disclosure: The author does not currently hold shares of IBB. However, the author owns shares of Celgene and Gilead. The author has no business relationship with any companies mentioned in this article. He is not a professional financial advisor or tax professional. This article reflects his own opinions. This article is not intended to be a recommendation to buy or sell any stock or ETF mentioned. Kiedrowski is an individual investor who analyzes investment strategies and disseminates analyses. Kiedrowski encourages all investors to conduct their own research and due diligence prior to investing. Please feel free to comment and provide feedback, the author values all responses. The author is the founder of stockoptionsdad.com a venue created to share investing ideas and strategies with an emphasis on options trading.