International Business Machines (IBM) had been trading range bound for five months from mid-April through mid-September, trading between roughly $140 and $145. Before its Q3 earnings, IBM had finally broken out to $154 with a subsequent implosion after its earnings release that fell short of expectations coupled with its announcement that it will be acquiring Red Hat (RHT) for $34 billion.

IBM’s stock is now at a 52-week low after the company missed revenue targets, notably a drop in Cognitive Solutions and server weakness implying that its revived nascent growth earlier this year will be subdued moving forward. IBM’s stock has been decimated and now trades at ~$115 per share or down over 30% from it's 52- week high of $171. IBM has had a long turn in restoring growth after posting 20+ consecutive quarters of declining revenue however IBM had posted back-to-back quarters of revenue growth as of late.

This growth has come on heels of its long-term imperatives beginning to bear fruit in emerging high-value segments that has fundamentally changed its business mix while evolving its offerings to align with new age information technology demands. The Red Hat acquisition will ostensibly augment its transition away from its dependency on legacy businesses to the future of cloud, artificial intelligence, and analytics.

As IBM transitions to quarterly revenue growth, in the backdrop of its evolution to emerging high-value segments (i.e., blockchain) and bringing the Red Hat portfolio into the fold, the company presents a compelling investment opportunity considering its suppressed valuation and a dividend yield of over 5%.

In addition to the evolving business mix in strategic imperatives, IBM offers a great dividend, share buyback program while continuously acquiring companies to drive the business into the future.

Breaking news came out on Sunday the 28th of October that IBM was acquiring Red Hat (RHT) for $190 per share for a total enterprise value of $34 billion (Figure 1).

"Most companies today are only 20% along their cloud journey, renting compute power to cut costs. The next 80% is about unlocking real business value and driving growth. This is the next chapter of the cloud. It requires shifting business applications to hybrid cloud, extracting more data and optimizing every part of the business, from supply chains to sales."

IBM says it remains committed to Red Hat's open governance, open source contributions, participation in the open source community and development model, and fostering its extensive developer ecosystem. Most notably, IBM says the acquisition will accelerate IBM's revenue growth, gross margin and free cash flow within 12 months of closing. This growth accelerator is a much-needed boost to the company’s stagnant growth over the past few years and will drive IBM further into the future of the cloud and where businesses are mitigating to from an enterprise perspective. 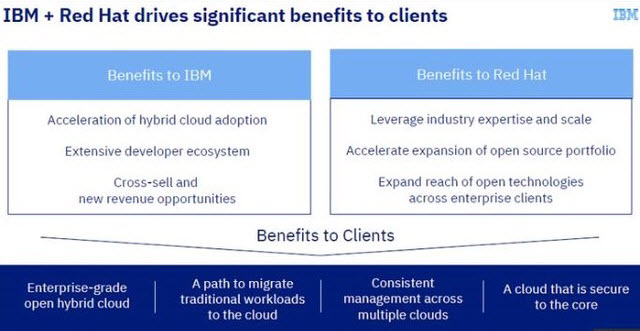 The leadership teams from IBM and Red Hat briefed investors on the acquisition, synergies, and timeframe of the deal. Red Hat is the world’s leading provider of open-cloud solution and the emerging leader in the platform for hybrid-cloud and multi-cloud. IBM is attempting to reset the cloud landscape via its acquisition of Red Hat and in the process will become the undisputed number one leader in hybrid-cloud which is an emerging $1 trillion market.

Companies are moving into the second chapter of the cloud where they’re moving away from simple cost synergies/business value to an inflection point of moving all their processes and their data to a hybrid environment. The first chapter was estimated to be roughly 20% of the cloud market and this second chapter is estimated to be the next 80% with hybrid, multi-cloud, open, secure end-to-end in multi-cloud management (Figure 2).

Red Hat brings 90% penetration in the Fortune 500, and they are now one of the key foundational technologies of the hybrid-cloud. As clients transition to hybrid and multi-cloud, Red Hat can leverage their large installed base and its open architecture. Hence why Red Hat has emerged as one of the key foundational technologies for hybrid cloud computing. All of this feeds into analytics, data, AI and Watson since all that combined data across these environments need to be delivered in a secured manner. 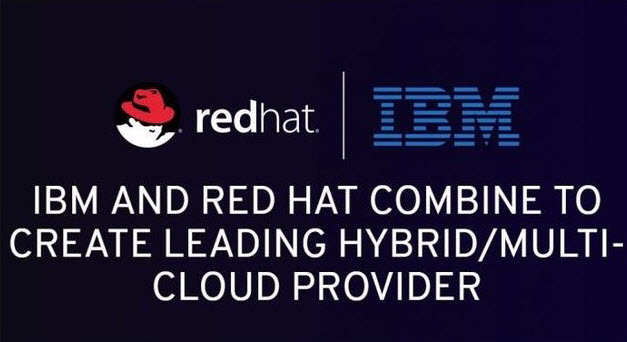 Red Hat will accelerate IBM’s growth and reinforce its high-value model from a revenue growth standpoint and the shift to higher value. Red Hat had been growing revenue at a strong double-digit rate and a similar level of backlog growth. Red Hat has high margins and great free cash flow generation. Red Hat will accelerate IBM’s top-line revenue growth rate by 200 basis points on a five-year CAGR. Red Hat accelerates the business shift to a higher value and expands gross profit margin, and free cash flow in year one, and operating earnings per share by the end of year two.

From Red Hat perspective, their offerings can now benefit from IBM’s scale and resources to enhance the development and continued improvement of its infrastructure, management, automation solutions, and cloud application development. IBM believes that this will bring revenue synergies and clearly stated that it’s not about a cost synergy case, but a revenue growth case because this acquisition is about growth.

Finally, Ginni Rometty stated that this is good for both shareholders as well as IBM’s own high-value model. 200 basis points of revenue to all of IBM CAGR five years and year-one free cash flow, as well as gross margin expansion, will occur. Rometty stated that the dividend is solid and will continue to grow and nothing will change regarding the dividend. “And we know how much that means and we're quite able now to still organic, non-organic, do this, our dividend we're in very good ample financial flexibility.”

After posting back-to-back quarters of revenue growth, IBM slipped back into a revenue contraction. I think there’s a lot to like moving forward with the reassurance that the dividend is safe, stabilizing revenues and a lot of shots on goal for future growth especially with Red Hat coming into to fray.

A Note on Blockchain and IBM’s Leadership Position

A new frontier of growth lies in the nascent blockchain technology as IBM is a first mover in this promising, emerging technology. IBM’s enterprise blockchain solutions will be a substantial growth engine for the company as more companies adopt this technology. Per International Data Corporation (IDC), worldwide spending on blockchain solutions reached $2.1 billion in 2018 through mid-March, compared with $945 million spending in 2017. IDC is projecting that total blockchain spending will reach $9.2 billion by 2021. The United States is the biggest investor in blockchain technology, representing ~40% of the total worldwide spending. Blockchain has the potential to penetrate the $2 trillion in global payments and $1.8 trillion global supply chain.

IBM is offering the first enterprise-grade blockchain platform for permissioned networks and is aggressively stepping into the enterprise blockchain solutions space. Any company looking to employ blockchain technology will likely leverage a company like IBM for the blockchain infrastructure as it’s a first-mover in the space and Juniper Research ranked IBM as the top blockchain company in the world with 40% of surveyed tech executives and leaders ranking IBM as their preferred blockchain service provider. IBM is well positioned as it is the #1 enterprise blockchain partner with greater than 400 projects with world-renowned companies across many different sectors involving transactions such as Dow, Walmart HSBC, Nestle, and Visa.

IBM has more than 400 corporate users that are currently managing various projects on the technology. A total of 63 companies are collaborating in IBM-led consortiums with various themes. 25 companies testing IBM’s blockchain operate in global trade, 14 are in global payments, and 15 are in food supply chain management.

Other partners in the food industry are Nestlé, Unilever and Kroger. In global shipping, IBM is working with Maersk, Dow Chemical and DuPont. Maersk, the world’s largest shipping line, launched a joint venture to track international cargo. IBM’s blockchain is seeing inroads in the finance industry as well with Societe Generale, HSBC, WeTrade, Unicredit, and Santander being top partners. IBM is also working with payment providers like VISA, BBVA, CIBC, EarthPort, and Polynesian payments platform KlickEx.

Google (GOOG), Facebook (FB), NVIDIA (NVDA), JP Morgan (JPM), Alibaba (BABA) and other big movers in technology are pivoting towards blockchain to harness its power to augment their respective business for the future. CEOs across a broad range of industries are investing heavily in blockchain. Global spending on blockchain solutions is set to more than double to $2.1 billion this year per a Cowen report. Per a survey that included 600 executives from 15 territories by PwC, it’s been reported that 84% of firms are “actively involved” with blockchain technology.

Walmart announced that all suppliers of leafy green vegetables for both Sam’s Club and Walmart must upload their data to IBM’s food safety blockchain solution by September 2019. The IBM Food Trust Solution, which Walmart helped develop, makes the food supply process more transparent and traceable in the event of an illness outbreak. Before the blockchain technology adoption, it took roughly a week to trace the source of food and blockchain reduces the time to a matter of seconds, mitigating the risk of tainted food reaching consumers.

IBM is slowly repositioning itself for future growth with new and emerging end markets, and to this end, IBM has just made a $34 billion acquisition of Red Hat. Red Hat is the world’s leading provider of open-cloud solution and the emerging leader in the platform for hybrid-cloud and multi-cloud. IBM is attempting to reset the cloud landscape via its acquisition of Red Hat and in the process will become the undisputed number one leader in hybrid-cloud which is an emerging $1 trillion market. Red Hat will accelerate IBM’s top line revenue growth and its business shift to a higher value while expanding gross profit margin and free cash flow followed by greater earnings per share.

Its long-term imperatives are beginning to bear fruit in emerging high-value segments that has fundamentally changed its business mix while evolving its offerings to align with new age information technology demands. A new frontier of growth lies in blockchain technology as IBM is a first mover in this promising, emerging technology. IBM is aggressively stepping into the enterprise blockchain solutions space, and it may be a substantial growth engine for the company. IBM offers a compelling long-term investment opportunity given its attractive valuation, dividend, share buyback program and growth initiatives with secular trends and long runways into the future.

Disclosure: The author does not hold shares of IBM, however, may engage in options trading surrounding this underlying security. The author has no business relationship with any companies mentioned in this article. He is not a professional financial advisor or tax professional. This article reflects his own opinions. This article is not intended to be a recommendation to buy or sell any stock or ETF mentioned. Kiedrowski is an individual investor who analyzes investment strategies and disseminates analyses. Kiedrowski encourages all investors to conduct their own research and due diligence prior to investing. Please feel free to comment and provide feedback, the author values all responses. The author is the founder of stockoptionsdad.com a venue created to share investing ideas and strategies with an emphasis on options trading.