The Energy Information Administration released its Short-Term Energy Outlook for November, and it shows that OECD oil inventories likely bottomed in June at 2.807 billion barrels. It estimated a large 20 million barrel gain for October. Though it forecasts that stocks will drop in December to 2.867 billion, that is 50 million barrels higher than in the October outlook.

Throughout 2019, OECD inventories are generally expected to rise, reaching 3.0 billion barrels in August. It projects ending the year with 138 million barrels more than at the end of 2018 in glut territory. 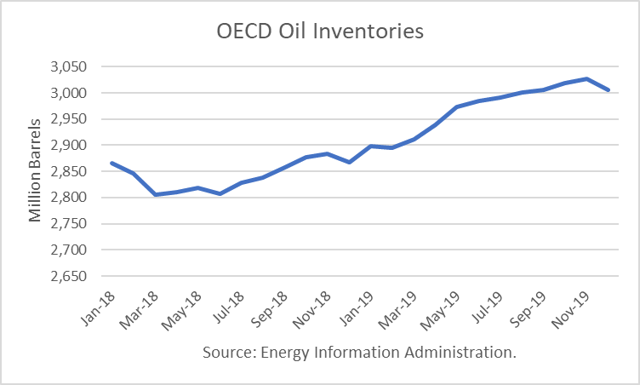 The moment of truth has come, and it appears that the sanctions will cut less of Iran’s production and exports than has been added by OPEC+ producers and the U.S. That is why oil prices have been dropping for eight straight sessions. 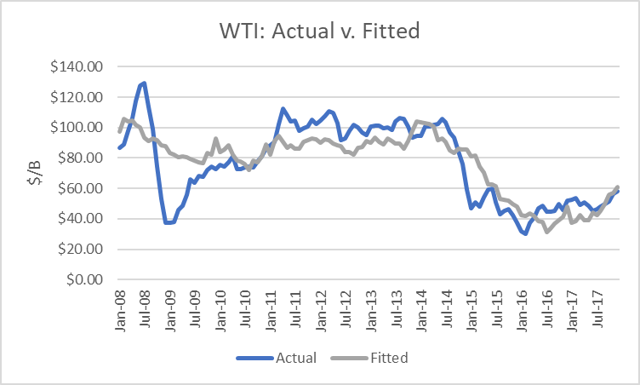 I used the model to assess WTI oil prices for the EIA forecast period through 2019 and compared the regression equation forecast to actual NYMEX futures prices as of November 7th. The result is that oil futures prices are overvalued. Later in 2019, oil prices would drop into the low $40s if these inventories are realized. 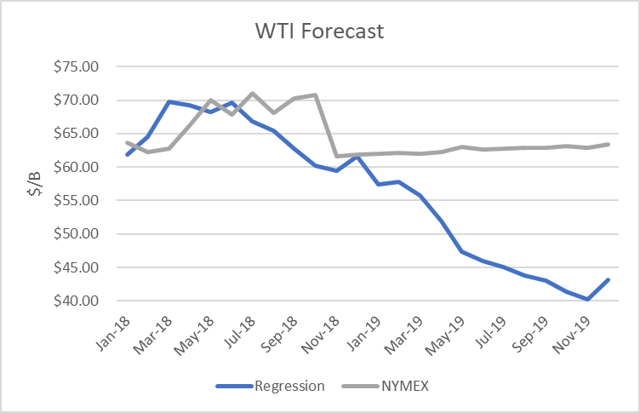 The EIA revised its estimate of crude production up by 400,000 b/d in the week ending November 2nd to 11.6 million barrels per day. This is a major revision to not only to the U.S. supply/demand balance but also to the world balance.

Adding to that negative development, Trump permitted waivers on Iranian oil purchases for the next six months, implying about half of its exports will be cut, not all of them. Together, these changes improve the supply outlook by over 1.5 million barrels per day.

As indicated above, these trends would create a new global oil glut in 2019. Furthermore, the U.S. outlook does not appear to incorporate a surge in the Permian Basin when it is de-bottlenecked in 2019.

Finally, the outlook does not appear to build-in an end to the Iran sanctions next year, which I think is highly likely. According to this analysis:

“Anyone certain that the Iranians won't negotiate any modifications on the nuclear deal shouldn't be so sure. Domestic pressures and the readiness of the Russians to play the arbiter role can provide the Iranians an out. Their history suggests they will go for it.”

The major question is whether the OPEC+ group can and will cut their production again next year. The agreement proposed by the Saudi energy minister for December is that they will not specify any production number at the meeting but rather decide to add or remove barrels as they deem necessary.

My view is that Trump will insist they keep production high in order to hurt Iran’s oil revenues. KSA has to follow his lead which is directed against their arch-nemesis, Iran. Furthermore, now that Russia has resumed maximum production, I think they will not want to go through the process of cutting back again, which took close to six months to achieve.