It was a timely call last week to "Beware Of Extended Consolidation" as right from last Monday we saw both metals plummet all the week long. Surely, it wasn't a self-fulfilling prophecy as the market was unexpectedly caught in a bullish euphoria. The chart structure was telling us about this possibility as such patterns appear from time to time. The same pattern had appeared on the Bitcoin chart as I had warned you this past August. That pattern of extended consolidation smashed Bitcoin’s value as planned from $10600 down to the projected target of $7800. Let's see where this pattern could send precious metals prices this time around. 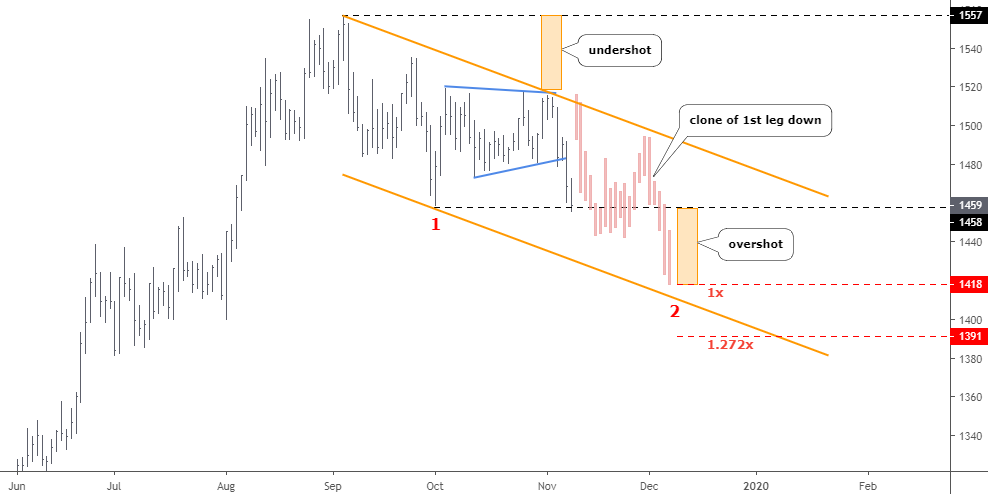 We've got the tricky junction between two legs down on the gold chart. The triangular structure (blue) had been shaped as lower peaks, and higher valleys were established there. This pattern is rarer than the regular zigzag that I was expecting to unfold. It created a huge undershot to the top of the range, which might result in a big overshot below the bottom of the range. By the way, gold already dropped like a rock to pierce the valley of the range last Friday. But, of course, that's not enough.

Applying simple math, we can find the possible targets for the second leg down. The equal distance of two legs down would target the $1418 area, which would be enough to compensate the undershot. The next target is located at $1391, where the leg 2 is equal to 1.272x of leg 1. The price should pierce the orange downtrend then.

I cloned the 1st leg down and pasted it to the right in a pink bar pattern to visualize the possible path for the 2nd leg down. It looks like we might soon complete the first move of this 2nd leg down around $1440 and then enter the smaller consolidation. Last time it was sharp to the upside as it could repeat to retest the $1500. After that, we could see another bearish attack. Watch the integrity of the upside of the orange downtrend for invalidation alert.

Alternatively, gold still could be in a more complex junction between two legs down. This would imply the retest of $1520 before the 2nd leg down would start. The silver chart below cuts the chances of that alternative dramatically.

It turned out that silver had already been in a retracement after it collapsed from $18.31 at the end of October. That correction could reach only the $18.20 level last Monday, and then the move down resumed. There is an even larger undershot on the silver chart than on the gold chart (7% vs. 3%), and this could send the white metal price much further below the range.

Let's get the target numbers. If the 2nd leg would be equal to the 1st leg, then the price would hit the $15.56. In an extended version with a 1.272x ratio, the $14.81 level would be reached. In that case, we will come very close to the threshold of the former move up at $14.27. The breakdown of it could change the game dramatically. Let's live and see.

There is a cloned pink bar pattern to show the path of the former move down. The structure implies a minor pullback is around. Then, the small drop should complete the first move down. It might be followed by a sharp consolidation/junction to retest the $17.40 area (the upside of the orange downtrend). After that, the final drop could unfold to complete the whole consolidation. Watch the integrity of the upside of the orange downtrend for invalidation alert.