It’s time to find out in this traditional yearly post if there were any currencies that could beat the mighty gold this year.

Before we get down to the results of 2019, let us see below how you forecasted the future back at the end of December 2018. 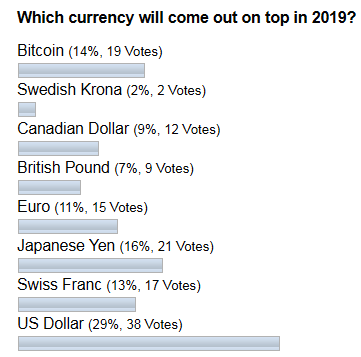 The majority of you again, as last year, bet that the primary currency (USD) would defeat all other rivals to come out on top in 2019. The readers’ geography played a crucial role here. The second choice was the Japanese yen; I guess it was selected as it topped the chart last year.

Bitcoin ranked the third; it was the top loser last year. It looks like some readers watch my Pendulum experiments closely.

Let’s look at the diagram below to find out the results.

Gold was so mighty this passing year that none of the fiats could even come close to its supremacy. This time the majority missed the top forecast as only the former anti-hero Bitcoin managed to overcome the yellow metal with a +66% gain. Last year it showed almost the same dynamics with 72% but in a negative direction. It is famous for such volatile behavior.

Below is the full ranking for Y2019 with the Y2018 results in the brackets.

The strongest from the losers’ camp, the Canadian dollar lost 12% against the gold and managed to place second. Last year it was only the 6th. It benefited from the highest positive interest rate among peers, a stable economy, and a strong oil price, which grew by more than a third.

The British pound finally cuts the knot with the Brexit situation and finishing the year with the 3rd rank with a -13% loss. The pendulum took its full effect here as the pound could revisit the March’s maximum at the end of this year.

The safe haven “pack” of the yen (JPY), dollar (USD), and frank (CHF) placed fourth descending in the middle of the ranking. The risk-on mode was turned on this year as S&P 500 hit the historical records one by one at the end of this year, and safety currencies were not in demand like last year.

The euro can’t raise its head with a 5th rank as ECB cut the deposit rate to a record low of -0.5%, and the growth outlook is weakening.

The worst fiat was again as last year the Swedish krona (SEK) with a historic record 20% loss! It is a perpetual laggard, which scored a -18% loss in 2014 when we started the ranking. The struggling Swedish economy puts pressure on its currency. Gold or Bitcoin should be in high demand in this country.

Let’s see what the next year will bring to the market.

Thank you very much for all your warm feedback and strong support in 2019.

One thought on “Top Currencies VS. Gold In 2019: Last Man Standing”