The market has rendered AMC Entertainment (AMC) a worthless company. The stock has nosedived from a 52-week high of $17 to $6.50 per share, resulting in a 62% reduction in market capitalization. Even worse, AMC was $33 per share in 2017 resulting in a multi-year meltdown of 80%. The catastrophic stock collapse has occurred in the backdrop of record numbers at the domestic and worldwide box office. There’s a paradoxical disconnect between the record multi-year box office stretch and AMC’s stock price.

AMC recently posted a strong quarter and has diversified its revenue stream by rolling out its own loyalty program that now has over 900,000 members to evolve a large segment of its business mix towards a subscription-based model to smooth out box office revenue fluctuations. This will allow durable and more predictable revenue streams in the backdrop of changing box office dynamics. AMC recently posted a record third-quarter attendance in the U.S. and international markets along with strong Q3 numbers. At current levels, the stock sports a hefty dividend yield of ~11% due to the decimated stock price.

Streaming threats from the likes of Netflix (NFLX), excessive debt load, bleak 2020 movie slate while being one of the most heavily shorted stocks (~60% of the float being sold short) has decimated the shares of AMC. I feel that AMC has significant upside considering its depressed valuation, improving financials, upcoming deleveraging, and creative initiatives to drive revenue growth.

First, AMC has been firing on all segments of its business on improving fundamentals across the entire enterprise over the previous quarter. For Q3 2019, AMC beat on the top line revenue with $1.32 billion, beating estimates by $10 million and missing on the bottom line with -$0.53 EPS, missing by $0.10 per share. Revenue grew by 7.8% and a record third-quarter attendance in each of its U.S. and international markets.

"Our U.S. industry outperformance continued in the third quarter as we outperformed the industry by 220 basis points on attendance per screen and 450 basis points of admission revenue per screen. Additionally, AMC generated record third-quarter U.S. food and beverage revenues per patron of $5.35 and international food and beverage revenues per patron, in constant currency, of $3.77, representing year-over-year growth of 4.7% and 7.4%, respectively. Aron concluded, “The power of the AMC platform is clearly evident in these results, and we are highly encouraged by our performance in the third quarter as we position ourselves for a strong finish in 2019. AMC is achieving real momentum, as we gain market share and outperform our industry in attendance and revenue growth. In turn, this is enabling us to be vividly focused on generating additional free cash flow, deleveraging our balance sheet and driving shareholder value.”

Investors have turned their focus to AMC’s massive debt load as a rationale to sell the stock. Recently AMC’s CFO Craig Ramsey stated that the company’s debt was “higher than we’d like it to be,” and the company has acknowledged this as a long-term financial target (Figure 1). Total debt currently sits at $4.7 billion and AMC has rolled out a combination of debt refinancing and deleveraging targets to bring its net leverage down to 3.5-4.5 times within three years (Figures 1 and 2). If AMC can demonstrate a focused effort on cleaning up its balance sheet and reducing its leverage, then this could be a major catalyst for the stock to appreciate. 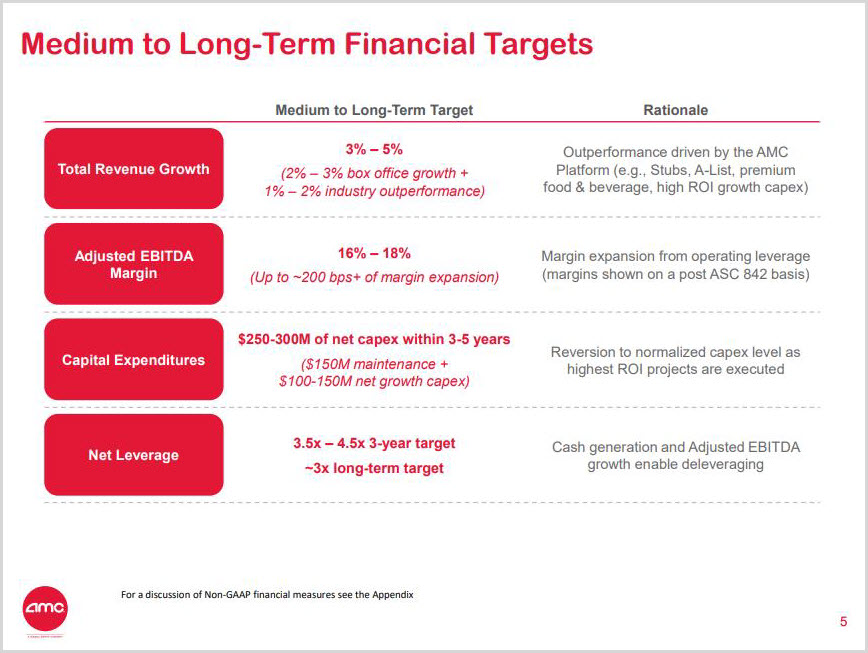 Netflix (NFLX), Hulu/Disney+ (DIS), and Apple (AAPL) are in the midst of a significant streaming war and this has been another rationale to sell the stock. AMC’s CFO Ramsey acknowledged the related risks that "people will stay home and watch content through a streaming platform," and more content will shift to streaming services, potentially shrinking big-screen audiences.

In an effort to combat the potential threat from streaming, AMC is launching a streaming service that will allow members of its loyalty program to rent or buy films and watch them at home. U.S. households that have signed up to the company’s AMC Stubs program will be able to access about 2,000 films from every major studio. Later in the year, the service is slated to be expanded to include films from AMC Networks’ IFC Films and RLJE Films. AMC Theatres will promote AMC Networks’ targeted streaming services, marking the first cross-platform marketing between the companies. Those services include Acorn TV, Shudder, Sundance Now and UMC. Customers can rent or buy films through the AMC Theatres mobile app, Roku (ROKU), and smart TVs with more services and devices to be added in the future.

“With more than 20 million AMC Stubs households, and with our website and smartphone apps already being visited hundreds of millions of times annually by movie fans, AMC Theatres is in a unique position to promote specific movies with greater personalization than has ever been possible before,” AMC Theatres Chief Executive Adam Aron said in a statement.

Clearly, there’s a disconnect between the multi-year strength at the box office and AMC’s stock price. Over the past decade, the domestic box office has had robust and consistent box office revenue with steady growth overall (Figure 3). Worldwide, the box office posted its best year in 2019 as global receipts exceeded $42 billion for the first time ever. The international box office crossed $30 billion for the fifth time ever due to growth in China, Japan, South Korea, and France. North America had its second-biggest year on record, crossing the $11 billion mark for the fifth straight year. Analysts are expecting weakness in the 2020 box office which has weighed on the stock thus far in 2020. 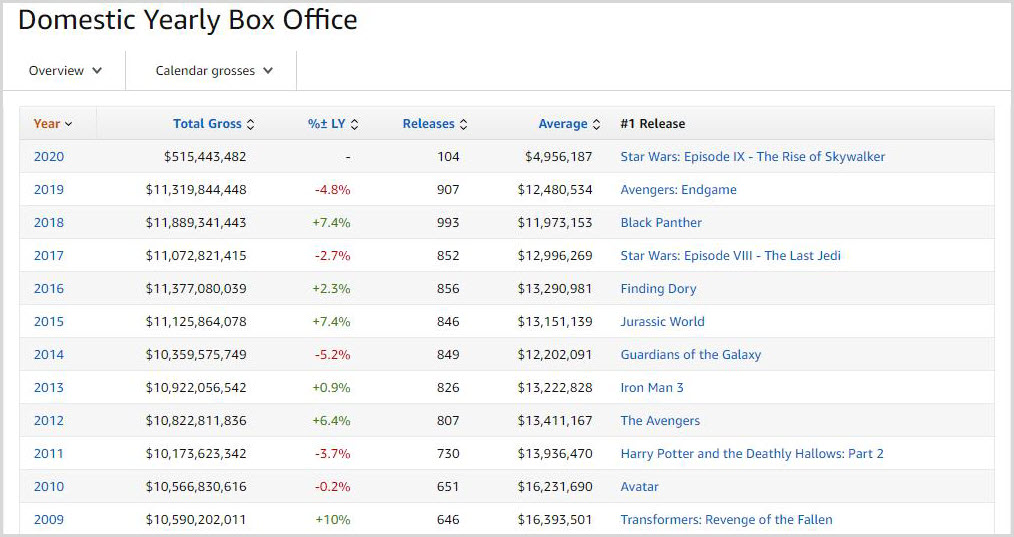 AMC’s loyalty program now has over 900,000 subscribers, which is expected to generate more than $150 million of annual recurring revenue. This will provide further penetration on the revenue front in excess of $300 million when factoring in food and beverage purchases and full-fare tickets purchased by bring-along guests such as family and friends. The loyalty program provides an opportunity to shift a segment of its business mix to a subscription-based model, providing durable and predictable revenue streams, mitigating box office fluctuations and driving long-term customer loyalty. Under this ticket subscription program, members can attend up to three movies per week in every available showtime and format.

AMC has been faced with a confluence of issues and challenges ranging from potential streaming competition, massive debt load, expected weakness in the 2020 movie slate, and is one of the most heavily shorted stocks in the market. AMC is addressing the potential streaming threat by rolling out a rapidly growing loyalty program that has over 900,000 members to evolve a large segment of its business mix towards a subscription-based model to smooth out box office revenue fluctuations. AMC’s loyalty program has been so popular that it put through price increases to expand its margins due to its pricing power. Additionally, AMC is launching a streaming service that will allow members of its loyalty program to rent or buy films and watch them at home. AMC has rolled out a combination of debt refinancing and deleveraging targets to bring its net leverage down to 3.5-4.5 times within three years. If AMC can demonstrate a focused effort on cleaning up its balance sheet and reducing its leverage, then this could be a major catalyst for the stock to appreciate.

Overall, AMC is strengthening its business and expanding revenue streams while re-engaging the consumer via digital, mobile and loyalty program options, reformatting theaters to enhance the user experience and international expansion augmented by a strong dividend. The stock looks very attractive considering its depressed valuation, solid Q3 earnings and company initiatives to drive the consumer experience. The long-term growth narrative remains intact while revenue continues to grow and expand into new verticals into 2020.