The Energy Information Administration released its Short-Term Energy Outlook for July, and it shows that OECD oil inventories likely bottomed in this cycle in June 2018 at 2.804 billion barrels. It estimated stocks dropped by 14 million barrels in June to end at 3.283 billion, 362 million barrels higher than a year ago. It estimates that inventories peaked in May 2020 at 3.297 billion.

The EIA forecast was made to incorporate the OPEC+ decision to cut production and exports. According to OPEC’s press release:

“Adjust their overall crude oil production downwards by 9.7 mb/d, starting on May 1st, 2020, for an initial period of two months that concludes on June 30th, 2020. For the subsequent period of 6 months, from July 1st, 2020 to December 31st, 2020, the total adjustment agreed will be 7.7 mb/d. It will be followed by a 5.8 mb/d adjustment for a period of 16 months, from January 1st, 2021, to April 30th, 2022. The baseline for the calculation of the adjustments is the oil production of October 2018, except for the Kingdom of Saudi Arabia and The Russian Federation, both with the same baseline level of 11.0 mb/d. The agreement will be valid until April 30th, 2022; however, the extension of this agreement will be reviewed during December 2021.”

I updated my linear regression between OECD oil inventories and WTI crude oil prices for the period 2010 through 2019. As expected, there are periods where the price deviates greatly from the regression model. But overall, the model provides a reasonably high r-square result of 79 percent. 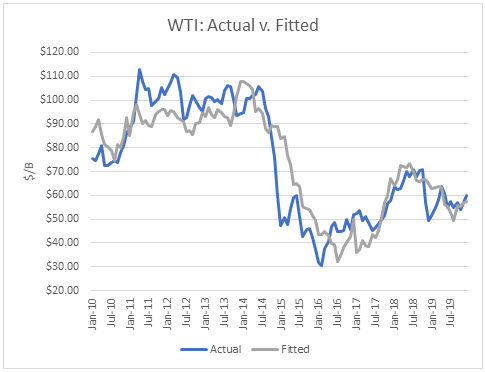 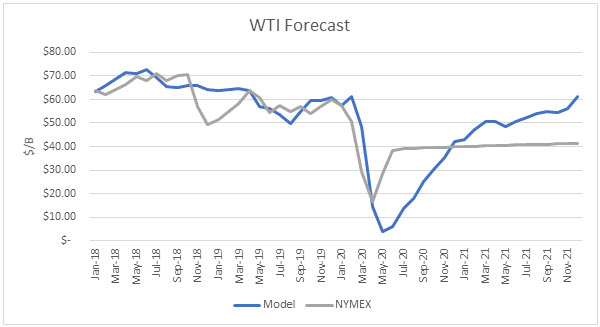 The 4Q18 proved that oil prices can move dramatically based on expectations and that they can drop far below the model’s valuations. The attack on Aramco’s oil facilities also proved they can rise above the model-derived price, as did the days following the killing of the Iranian general.

The most important uncertainty is how deeply and how long the coronavirus will disrupt the U.S. economy. The U.S. has become the epi-center of the pandemic and is the largest economy and oil consumer in the world. Efforts to open the economy back up have resulted in a surge of new cases of the virus. Therefore, some major states, such as Texas and California, have had to roll back plans reopening plans.

It is also unknown how much if any of the demand destruction will be permanent due to changes in business, such as online meetings instead of face-to-face meetings, and concerns about flying with infected people.

Changes in supply are almost equally uncertain, but producers’ behavior have become somewhat clearer. OPEC members did follow-though overall with cuts and have most recently signaled that the cutbacks will be reduced by August so as not to push oil prices too high.

In addition, U.S. shale producers have cut production but are signaling that they will bring more output online, given WTI prices around $40/barrel.

Another major unknown is if a “second wave” of the virus will return in the second half of the year, as is being predicted by some scientists. Also, the unknown is when effective treatments will be developed and manufactured so that health threats can be mitigated, and how long immunity may last after a person recovers from an infection.

This pandemic is the biggest market-moving event in the modern history of the oil market. And given its uniqueness, there is no reliable way to know how it will unfold. The public’s willingness and capacity to tolerate measures designed to mitigate the spread of the virus are also difficult to predict.

For now, the WTI futures price of around $40/bbl seems to be at the top end of the trading range. If the U.S. economy remains partially shut down for an extended period, support of that price level can be expected to wane.

One thought on “World Oil Supply And Price Outlook, July 2020”