Gold pricing had been under pressure for the fourth consecutive week before this week's trading activity resulting in defined technical chart damage with it breaking below its 200-day moving average last Thursday, May 12. This week's low occurred on Monday, May 16, when prices hit a low of $1785 and traded to a high of $1825 before closing above its opening price on Monday and above Friday's closing price at $1813.60. On Tuesday, gold traded to a higher high and a higher low than Monday, even though gold closed fractionally lower than its opening price. On Wednesday, gold traded to a lower low and a lower high than Tuesday's price action, but that all changed on Thursday. 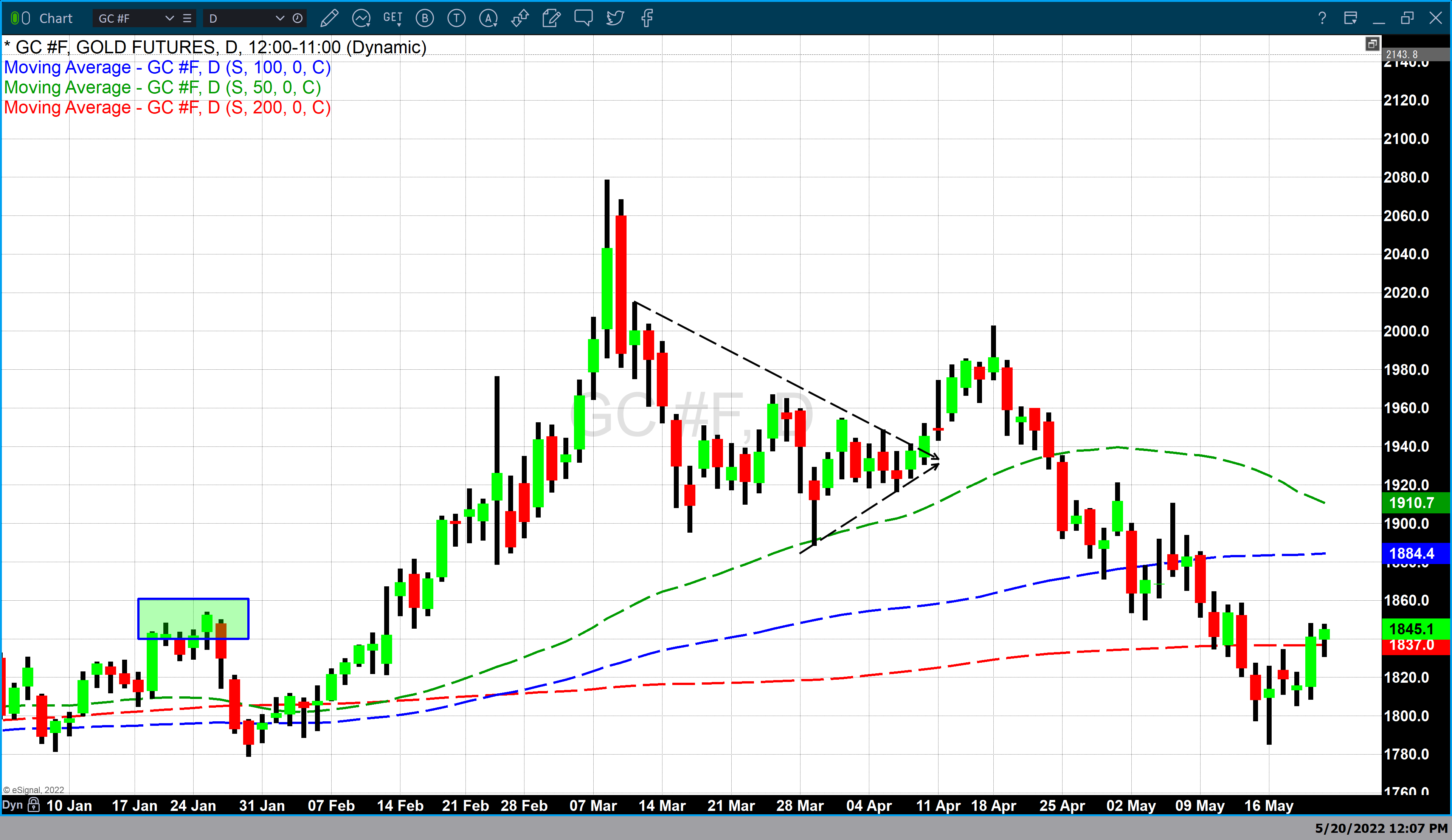 Thursday's price action moved gold solidly higher, opening at $1816 and closing at $1841, above its 200-day moving average of $1837. Although today gold had only a small gain, it opened and closed above its 200-day moving average, which on a technical basis is significant. If gold can maintain pricing above $1837 on a technical basis, we can derive that gold prices are now back in a solid long-term bullish demeanor.

The recovery this week was based upon market sentiment shifting their attention from the recent and future activities of the Federal Reserve in regards to their tightening monetary policy in which they have raised the Fed funds rate by ½ a percent at this month's FOMC meeting, which follows the quarter-percent rate hike they enacted in March. Recent statements by Chairman Powell indicated that they will get more aggressive when he said that he is open to raising rates well above the Federal Reserve's interest rate target for normalization, which is been set at approximately 2%. This was interpreted as a more aggressive monetary policy in an attempt to stop inflation from spiraling higher.

Statements from the Federal Reserve before this week indicated that they believed that inflationary pressures had peaked, and using the most recent numbers from last month's CPI inflation index is the validation of that assumption. The CPI index came in at 8.3% for April, below the 8.5% rate that occurred in March.

It has been the tightening of the Federal Reserve's monetary policy which has resulted in a tremendous selloff in U.S. equities which continue through this week, taking all three major indices into a defined tailspin with seven consecutive weeks of price declines.

However, gold had been selling off for the last four consecutive trading weeks based upon anticipation of much higher interest rates to stave off inflation. However, this week we have seen a clear and defined reversal of market sentiment as investors are now clearly focused on the reality that inflation has not peaked and is most likely continuing to move higher, and the prolonged risk-off market sentiment has shifted market sentiment from the higher yields of U.S. Treasuries to the safe-haven asset; gold.