In April 2018, I published the post with the title “Disney Could Rally After A Long Pause”. I spotted an interesting long setup on the Disney (DIS) chart that time. Below is that monthly chart of Disney stock with the bullish setup. 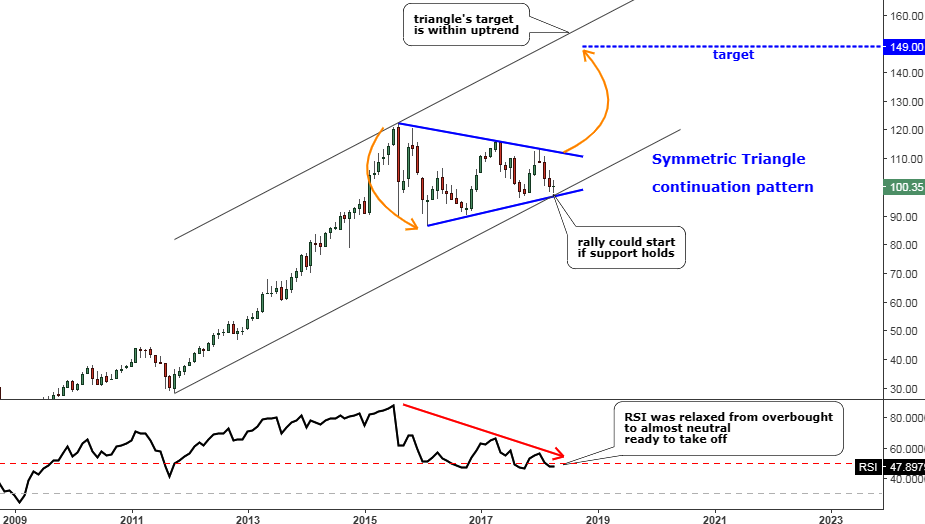 The combination of higher tops and higher lows has shaped the famous Triangle (Symmetric) pattern highlighted in blue.

The neutral position of the relaxed RSI indicator and the double trendline support on the chart facilitated the bullish opportunity. The target was set at the equal distance of the widest part of the pattern added to the breakout point. It was located at $149 with a potential gain of 50% as the stock was traded around $100.

We can see how it played out in the next chart. END_OF_DOCUMENT_TOKEN_TO_BE_REPLACED

Most recent data shows 246 different Exchange Traded Fund’s owned more than 24.7 million shares of Amazon.com (AMZN). But, the companies recent 20.9% decline in the month of October alone, (Amazon opened October trading at $2,021 per share and closed the month trading at $1,598 per share, or a 20.9% decline) has certainly had an effect on not only those 246 different ETFs and their investors, but also those investors whom may have directly purchased shares of the company. Furthermore, due to its market capitalization, it was a very heavily weighted stock in some large ETFs, which makes its recent decline even more painful.

Some of the hardest hit ETFs over the last month was the SPDR S&P 500 ETF Trust (SPY) because Amazon was its second, now third, largest holding and SPY was the single largest owner of Amazon stock. ProShares Online Retail ETF (ONLN) had 22% of its assets in Amazon as of late, while the Vanguard Consumer Discretionary ETF (VCR) and the Consumer Discretionary Select Sector SPDR Fund (XLY) both had more than 20% of their assets in Amazon.

Recent downside pricing pressure on Technology and FANG stocks have kept investors wary of jumping back into the market while we wait to see where the bottom may form. Concerns about long-term pricing pressures, US trade wars and the continued Congressional testimony regarding privacy and censorship issues have kept social media technology stocks in a negative perspective. The only aspect of this pricing pullback that is positive is that these stocks will, at some point, find a price bottom and attempt to rally as investors rush back into their favorites attempting to ride the run higher.

Our researchers believe the current price levels could be a prime example of a short-term bottom setting up in certain technology stocks. Both Apple and Amazon are two of the biggest and most actively traded stocks on the US Stock exchange. They differ from many of the other FANG stocks because these companies actually produce and sell consumer products & services that are, in many ways, essential to conducting commerce and trade.

This 30-minute chart of Apple shows our Adaptive Dynamic Learning Cycles price modeling system showing a cycle low is setting up over the next day or two in Apple followed by an upside price cycle that should push prices back above $220. Notice the oversold levels highlighted in BRIGHT GREEN. The last major oversold levels setup just below $218. The current oversold levels are setting up just below $217. We believe these $217 levels will likely set up a price bottom and prompt an upside price rally over the next 5+ days that could push Apple prices well above $225. 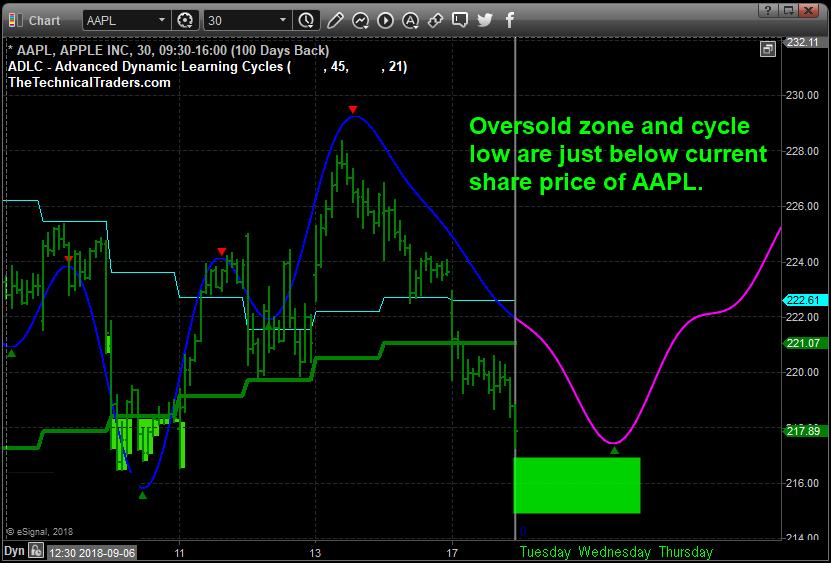 Amazon is setting up a different type of price bottoming formation – a Fibonacci price retracement bottom. We use these Fibonacci price retracement levels in conjunction with our other price modeling systems to attempt to determine where and when price reversals may be set up in the future. In this example, we can see a price bottom formed in early August of a Fibonacci 50% price pullback and the current price pullback is testing the same 50% level. We believe this current setup will prompt a price bottom to form and an upside price rally will likely result in AMZN rushing back above $2000 again with a few days. END_OF_DOCUMENT_TOKEN_TO_BE_REPLACED

The entire pharmaceutical supply chain cohort, specifically, McKesson (MCK), Cardinal Health (CAH), CVS Health (CVS) and Walgreens Boots Alliance (WBA) are all near multi-year lows despite still posting growth albeit slow with healthy balance sheets and growing dividends. This cohort has been faced with several headwinds that have negatively impacted the growth, and the changing marketplace conditions have plagued these stocks. The political backdrop has been a major headwind for the entire pharmaceutical supply chain including drug manufacturers, pharmaceutical wholesalers, and pharmacies/pharmacy benefit managers. Compounding the political climate, the drug pricing debate continues to rage on throughout political and social media circles weighing on the overarching sector. This backdrop erodes the pricing power of drugs that ultimately move from drug manufacturers to patients with insurers and other middlemen playing roles in the supply chain web.

In an effort to address these headwinds and restore growth, companies within this cohort have made bold moves such as CVS acquiring Aetna (AET) to form a colossus bumper-to-bumper healthcare company. Cardinal Health shelled out $6.1 billion to acquire Medtronic's Patient Care, Deep Vein Thrombosis, and Nutritional Insufficiency business. McKesson has made a string of acquisitions over the past two years deploying $1.2 billion for Biologics, $2.1 billion for Rexall and $525 million for Vantage Oncology in 2016. This was followed by a $1.1 billion acquisition of CoverMyMeds, undisclosed acquisition costs for RxCrossroads and Well.ca in 2017. Thus far in 2018, McKesson acquired Medical Specialty Distributors. END_OF_DOCUMENT_TOKEN_TO_BE_REPLACED