McKesson Corporation (NYSE:MCK) has shown signs of life as of late with a recent rally from $135 to $162 or a 20% move to the upside. The stock has demonstrated resilience over the past 12 months as this same move occurred earlier in the year as well. There’s been a tremendous amount of pressure on the pharmaceutical supply chain players due to public and political outcries over drug pricing with subsequent fierce pricing competition within the space, opioid epidemic, Amazon potentially entering the fray and possible erosion of the pharmaceutical wholesaler model. Social and political pressures over drug pricing and opioids have exacerbated these issues translating into slowing drug price increases and increased scrutiny on sales which negatively impacts McKesson’s ability to capture larger margins and volume of business. McKesson had missed several revenue targets for six consecutive quarters until its most recent quarterly earnings beat for Q2 FY2018. McKesson has paid dearly for this string of revenue misses, shedding over 44% of its market cap falling $106 per share from its all-time highs in May of 2015 falling from $240 to roughly $134 as of its recent Q3 2017 miss (Figure 1). McKesson has made a string of acquisitions throughout this time frame to circumvent the exogenous events related to its deteriorating business. As McKesson tries to navigate these challenging waters, I feel long term the stock has more upside starting with its most recent earnings beat catalyst. 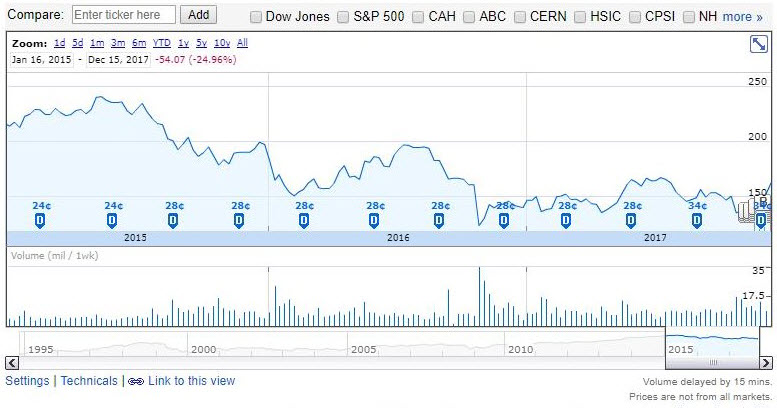 60 Minutes recently aired a piece on the opioid epidemic unfolding in the U.S., which was highly critical of the pharmaceutical drug wholesalers and their alleged role in this crisis. An interview was conducted with DEA whistleblower Joe Rannazzisi who stated that distributors had turned a blind eye to opioids being diverted for illicit usage. The three main pharmaceutical drug wholesalers that were singled out were AmerisourceBergen (ABC), McKesson (MCK) and Cardinal Health (CAH) which all sold off significantly once the report surfaced. Opioid-related stocks were also negatively impacted as a result which consisted of a basket of micro-cap and small-cap stocks. END_OF_DOCUMENT_TOKEN_TO_BE_REPLACED