Do bonds have a place anymore in your portfolio in the new Federal Reserve paradigm?

The Fed has a long history of creating asset bubbles, then later – sometimes years later – letting the air out of the balloon through monetary policy or regulatory change, leaving investors licking their wounds.

The most recent and most dramatic bubble inflation and subsequent deflation, of course, occurred in the first decade of this millennium. Through a policy of low-interest rates, the Fed largely encouraged American consumers to borrow heavily against their homes, while its laissez-faire regulation of the banks it’s supposed to monitor allowed these same consumers to borrow whether or not they had the wherewithal to pay the loans back.

We all know what happened when the Fed suddenly reversed course and raised interest rates and, perhaps more importantly, required banks to make their customers actually prove that they were good credit risks (imagine that?). We’re still feeling the fallout more than 10 years later, as millions of people defaulted on their loans because they couldn’t borrow any more money.

Now we have a similar story, only with stocks and bonds, but the Fed has taken a different attitude. It’s showing no inclination to prick the bubble it has created in financial assets through historically low-interest rates for a historically long period of time and through quantitative easing, i.e., attempting to corner the market on U.S. Treasury and mortgage-backed securities basically.

If you're a bond investor, maybe you should be praying for impeachment after last Friday's November jobs report.

Granted, based on other indicators, including GDP, leading indicators, and others, the economy is not as strong as it was at the beginning of this year. But it’s still in pretty good shape, as witnessed by the 266,000 jobs that were added to the economy last month.

The immediate reaction in the bond market was a sharp drop in prices and a concomitant rise in bond yields. In other words, good economic news is bad for bonds. By the same token, a strong economy pretty much squashes the idea of the Federal Reserve lowering interest rates anytime soon, which is also negative for bond prices. If anything, if this keeps up, the Fed’s next move may be to raise interest rates again, not lower them, which is the prevailing view in the financial markets at the moment.

So that would indicate that the bond investors’ best hope is for the Democrats to be successful in impeaching Trump and as quickly as possible and push the economy in the other direction.

Of course, as some of us might remember from our junior high civics or American government class (do they still teach that in schools?), impeachment is not the same thing as removal from office. President Clinton and President Andrew Johnson were both impeached, but neither was removed from office, having prevailed in the subsequent trial in the Senate. (That’s the part most giddy news stories about the current impeachment drama leave out). But then again, the entire Democrat strategy is really about generating as many headlines as possible with the words “Trump” and “impeachment” close together, as if that’s good enough.

So impeachment isn’t such a great political or electoral strategy. Neither is it a good bond investment strategy.

Let's get back to the jobs reports, which was described variously as a “blowout” or “blockbuster” or words close to that. END_OF_DOCUMENT_TOKEN_TO_BE_REPLACED

By: Gary Tanashian of NFTRH

It occurs to me that in public writing I tend to bludgeon people with macro fundamentals (like gold vs. positively correlated markets, yield relationships and even confidence in global policy makers), market indicators (VIX, Equity Put/Call, Gold-Silver ratio, Sentiment, Participation, etc.) and other views beneath the surface of things. So much so that I sometimes forget that people might like to see simple nominal charting as a frame of reference.

We update charts like these every week in NFTRH, but I have done relatively few for public review. So here it is, a simple weekly chart update of various markets, with very limited commentary interference from me.

As you can see, US indexes have so far held critical support. Best projected case would be a bounce to SPX 2000 (+/-). The market continues to roll over on the intermediate trend as of now. 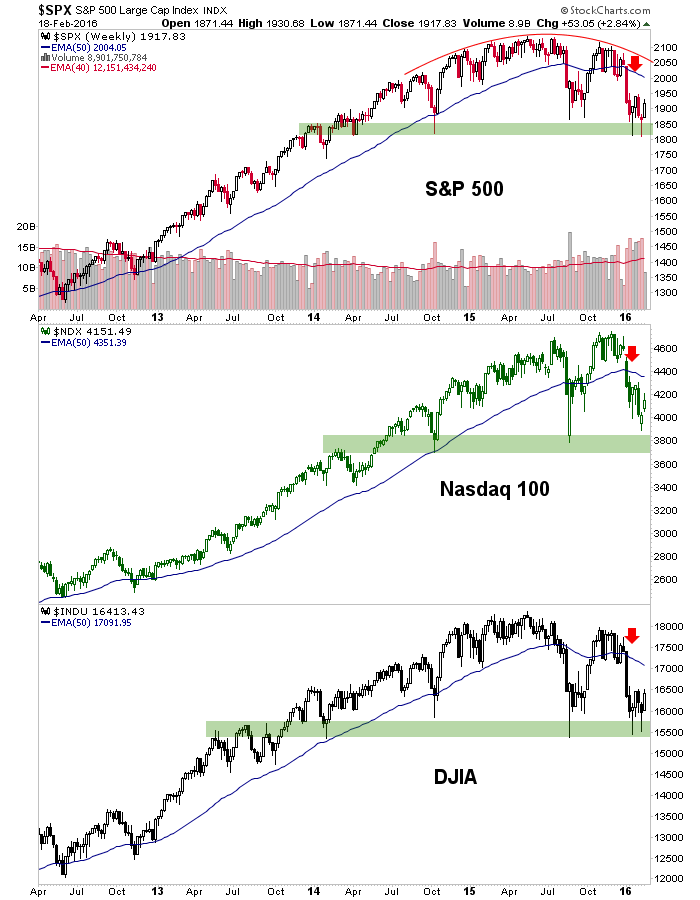 If the above is suspect to bearish, the broader US indexes are just bearish. Lower lows and lower highs abound and resistance is noted. END_OF_DOCUMENT_TOKEN_TO_BE_REPLACED

This week we examine ways in which inflation nibbles away at your retirement income, especially in light of the President’s proposal for Chained CPI adjustments to Social Security. The formal title is Chain-weighted Consumer Price Index and it’s a variation of how the government figures out what is what we would call "inflation." Either way, with the low rates on offer from CDs and other "safe" investments, investors who don’t take action fall behind every year.

Unfortunately, the numbers show what most people don’t want to face: the days of relying on Social Security plus a few stable bonds and CDs are long over. To earn decent and sustainable returns, investors must search beyond traditional safe havens. END_OF_DOCUMENT_TOKEN_TO_BE_REPLACED

A majority of Federal Reserve policymakers want to continue extraordinary bond purchases to help boost the economy at least through the middle of the year, according to minutes from the Fed's last meeting released Wednesday.

But many members indicated they want to slow and eventually end the program soon after that, as long as the the job market and economy show sustained improvement. The Fed's purchases of about $85 billion a month in Treasury and mortgage bonds are intended to lower long-term interest rates and support more borrowing and spending.

The minutes of the Fed's March 19-20 meeting were released at 9 a.m. EDT  five hours earlier than planned after the Fed inadvertently sent them a day earlier to congressional staffers and lobbyists. END_OF_DOCUMENT_TOKEN_TO_BE_REPLACED