The North America cannabis industry has a new champion. This well-known sector leader just completed an $875 million acquisition that puts it into a position to dominate the U.S. cannabis market.

Even though shares have been rallying for the last few weeks, I see plenty of upside ahead.

Curaleaf Holdings (CURLF) is an early leader in the high-growth U.S. cannabis industry with a market cap of $4.5 billion and operations in 18 states.

However, after one of the largest acquisitions in the history of the U.S. cannabis industry, Curaleaf has definitively taken the crown as the largest cannabis company in North America.

The new combined entity will become the largest cannabis company in the world by revenue. Here are some more details from the press release. END_OF_DOCUMENT_TOKEN_TO_BE_REPLACED

The most important time of the quarter has arrived for cannabis stocks.

Earnings season is when companies reveal sales and earnings results for the previous quarter – and just as important, the company provides guidance on what investors should expect for the following quarter.

Quarterly earnings that beat expectations have a documented history of helping shares outperform the broader stock market in the following weeks and months.

On Wall Street, this pattern is known as the post-earnings announcement drift (PEAD).

Here are some more details from Wikipedia.

Once a firm’s current earnings become known, the information content should be quickly digested by investors and incorporated into the efficient market price. However, it has long been known that this is not exactly what happens.

For firms that report good news in quarterly earnings, their abnormal security returns tend to drift upwards for at least 60 days following their earnings announcement. Similarly, firms that report bad news in earnings tend to have their abnormal security returns drift downwards for a similar period. This phenomenon is called post-announcement drift. 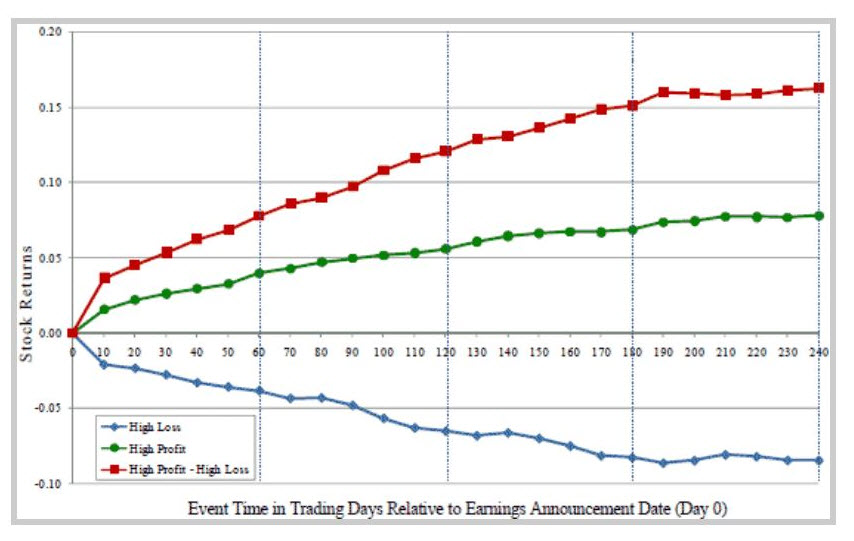 The power and reliability of the PEAD was on full display in the cannabis sector last quarter. An elite group of early cannabis leaders delivered impressive quarterly results that have been driving shares higher for the last two months. END_OF_DOCUMENT_TOKEN_TO_BE_REPLACED

Israel just took an important step to make it the next country to legalize recreational cannabis. If this happens, two young cannabis stocks could surge.

A bill to legalize recreational cannabis in Israel passed a critical test after being approved by the Ministerial Committee for Legislation.

According to The Times of Israel, this bill would decriminalize possession (up to 50 grams). It would also legalize individual possession of up to 15 grams among opening up other restrictions.

Here are some more details from The Times of Israel.

If the bill becomes law, selling and purchasing marijuana for personal use will be legal for those above 21 and authorized shops will be allowed to sell cannabis product, through growing marijuana at home will still be illegal. The legislation also outlined medical cannabis reform.

On Wednesday, the legislation is expected to be brought before the Knesset for the first of three votes it must clear in order to become a law.

The bill still has to jump a few hurdles, but the outlook is promising. Prime Minister Benjamin Netanyahu has found the leadership support needed for full legalization and has vowed to “resolve the issue of decriminalization and legalization.”

If the bill is passed – it would pave the way for Israel’s medical and recreational industry to flourish. If legalization pushes through, these two stocks are in position to benefit. END_OF_DOCUMENT_TOKEN_TO_BE_REPLACED

I call it the “holy grail” of the cannabis industry – a game-changing event that would mint the first cannabis billionaire and richly reward early investors.

I’m talking about the federal legalization of cannabis.

Some say it’s still a pipe dream, years away at best. However, the reality is that federal legalization could be right around the corner.

If you don’t believe me, check out what the CEO of the largest cannabis company had to say in an interview with Jim Cramer on Mad Money.

Here’s the clip from CNBC.

David Klein, the head of Canopy Growth, told CNBC’s Jim Cramer on Tuesday that as states continue to gradually permit medical and recreational use of marijuana, Congress will have no choice but to act.

“My assumption is that 2022, for me, is the magic number,” he said in a “Mad Money” interview. “I think, as you watch more and more states move to legalization for medical or rec, you really bring in almost two more senators each time who are really going to feel compelled to not make criminals out of the people in their state who are doing what’s legal in their particular state.”

Why Klein’s Comments Are an Important Signal

#1 – CEOs have an incentive to establish realistic goals that are attainable. It doesn’t do a CEO any good to set expectations really high and then fall short. For Klein to publicly project legalization in 2022, it tells me he knows about things that are happening behind the curtain. I think he’s showing his hand.

#2 – U.S. federal legalization by 2022 is the most optimistic projection that I’ve heard from anyone on Klein’s level.

#3 – As the CEO of Canopy, Klein has access to the best contacts and information in the industry. His opinion about the cannabis industry carries a lot of weight.

Current Events Are Pointing Towards Legalization

COVID-19 just made the case for legalizing cannabis stronger than ever. The U.S. economy shed around 40 million jobs in eight weeks. According to recent reports, many of those jobs are never coming back. Tax revenue has plummeted. Officials are calling it catastrophic. Politicians are desperate for new sources of taxes. END_OF_DOCUMENT_TOKEN_TO_BE_REPLACED

Oklahoma is showing the rest of the U.S. how to run the medical cannabis industry. This southern U.S. state has surprised many analysts, quickly growing into one of the largest and fastest-growing medical cannabis markets in the country.

Oklahoma is on pace to do $1 billion in cannabis sales in 2021 and is reporting record sales in each of the last two months.

Here are some more details from mjbizdaily.com.

Already one of the largest and fastest-growing markets in the country, Oklahoma’s medical marijuana industry broke sales records in both April and May as consumers stocked up on products amid the coronavirus pandemic.

Sales rose again in May to reach nearly $74 million – a monthly figure that far exceeds that of adult-use markets in Illinois, Massachusetts, Michigan and Nevada.

With more than $275 million in MMJ sales in 2020 to date, Oklahoma’s market could easily eclipse $700 million by the end of the year – in the same ballpark as more populous states such as Arizona and Florida.

Patients continued to enroll in Oklahoma’s medical cannabis program throughout the COVID-19 crisis – rising from roughly 272,000 in March to 297,000 by the end of May – though the recent monthly sales gains were driven by additional spending from existing patients. 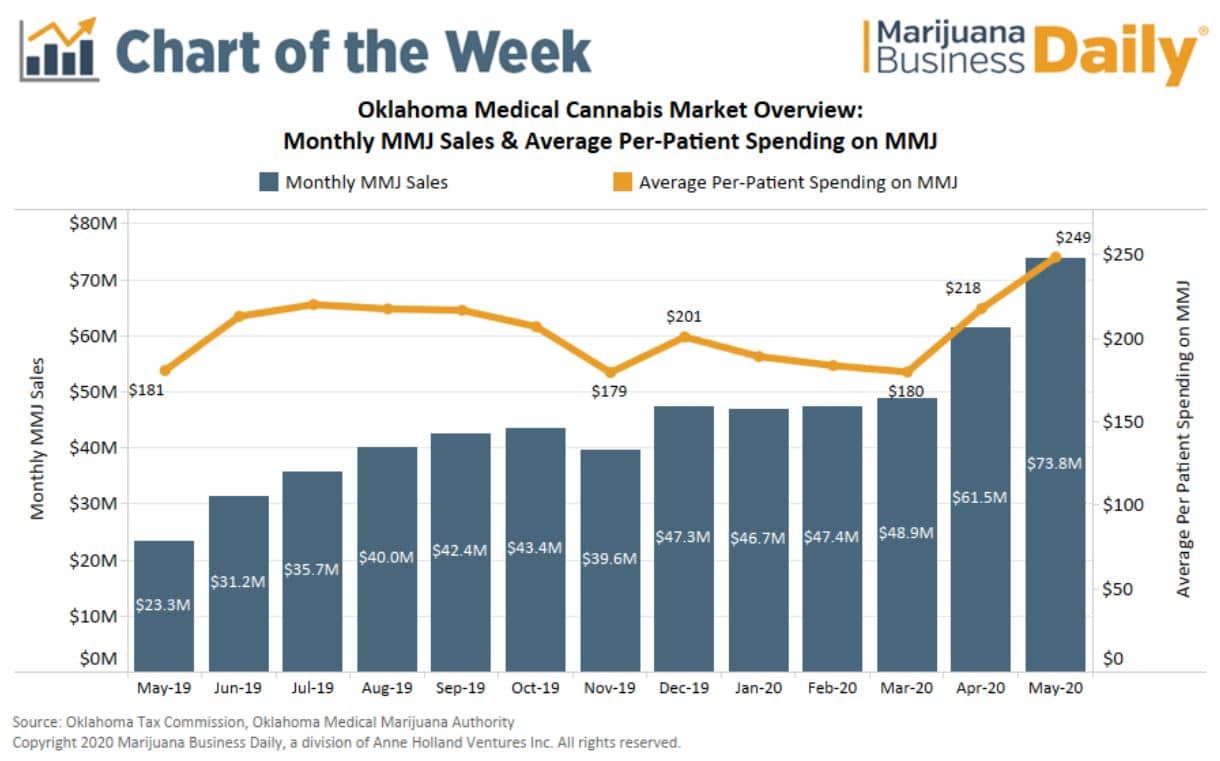