The US consumer is under pressure. Consumer Confidence level fell to 89 in April, and retail sales fell by -0.3 MoM in March. And as if that weren’t enough, GDP growth missed the mark for a second consecutive quarter, with Q1 growth falling to as low as 0.5% annualized, well below expectations.

Naturally, those developments are not bringing a Fed rate hike any closer, and it leaves the Dollar widely exposed to short selling. It’s the catch-up game, where Dollar peers such as the Euro, Yen, and Aussie are gaining lost ground. The relative advantage of the US economy is narrowing, and the prospect of a tightening cycle from the Fed seems even more remote.

This isn’t the first time the Dollar has been hit by the catch-up game. Here’s how the game plays out: The Dollar turns weaker, shaving its value by several percentage points only to come back stronger in the end as the US economy regains momentum. That’s why one should tread lightly before pouncing on a Dollar short. After a series of disappointments, the chances of an upward surprise in US data is much greater. There’s a very real chance that shorting the Dollar at this stage, after a 6.5% correction, will be too late. END_OF_DOCUMENT_TOKEN_TO_BE_REPLACED

Fed Rate Hike Not Priced In

With all that talk of a Fed rate hike it might seem that a Fed rate hike is now priced in. But that's not the case. As the data from the CME Fed Fund futures prices, the market sees only a 25% chance for the Fed to raise rates this September. And that could explain why the Dollar Index took a dip over the past weeks. 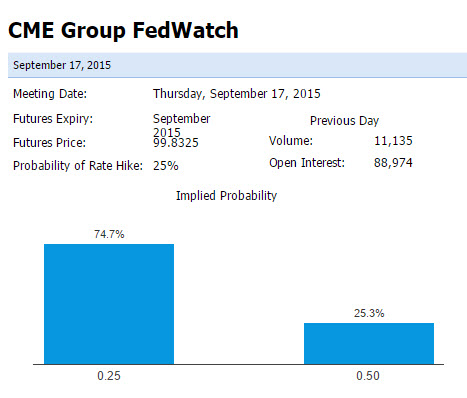 But here's where it gets really interesting. When we move forward on the calendar and examine the probability of a rate hike by December, the likelihood jumps to 59%. If we continue to move on into March 2016, that probability jumps to 77%. That means markets are almost certain that the Fed will raise rates at least once in the coming two quarters. END_OF_DOCUMENT_TOKEN_TO_BE_REPLACED

It just seems to this observer that the Greek kabuki dance is never ending. How can banks keep lending money to a country that is insolvent? That seems a little backward and just stupid to me. What do you think of the situation in Greece? 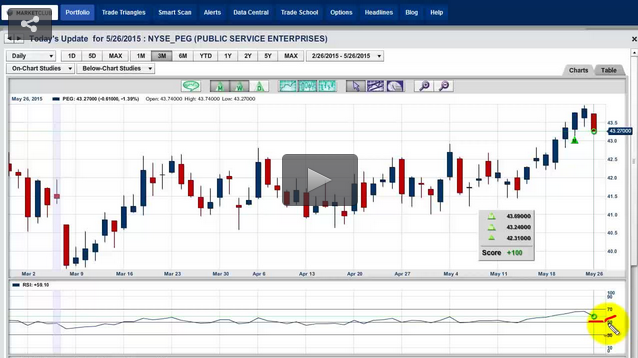 Here's the reality of the situation, Greece is going to default, the bankers may as well get ready to write off those loans as the money is not coming back. The next question is, whose next, Portugal, Spain or Italy? The next buzzword that is going to come out of all this is contagion. I think when Greece exits the eurozone it will be good for the euro longer-term. Think of it like when a company announces bad earnings and fires the CEO. The stock price has anticipated and discounted all the bad news and for the most part things get better over time for that company. The euro is the same way as pretty much all the bad news is out, except the actual exit of Greece from the euro.

Sooner or later it's going to come to crunch time and time is getting short. Angela Merkel and Germany are going to have to swallow their pride and make some important decisions very soon.

So onto the only economy that seems to be working and that is the US. Today I'm are going to be looking at the major indices to see if they are beginning to tire or getting ready for another upward push.

Hello traders everywhere! Adam Hewison here, President of INO.com and co-creator of MarketClub, with your video update for Wednesday, the 26th of March.

It would appear as though most of the major indices have just been spinning their wheels and going nowhere fast in the past 4 to 5 weeks as they have all been in a broad trading range. This type of market action can lull investors to complacency, but for me it has always been a wake-up call to pay close attention to the market as something big is going to happen.

As I see it, the market is doing one of two things, it's either building a base to move higher or it's a distribution top – only time will tell which is the correct answer.

One of our members suggested that the Dow 30 could be making an inverse head and shoulders formation. Certainly this is possible, but I need to see a clear breakout to the upside to confirm this formation. 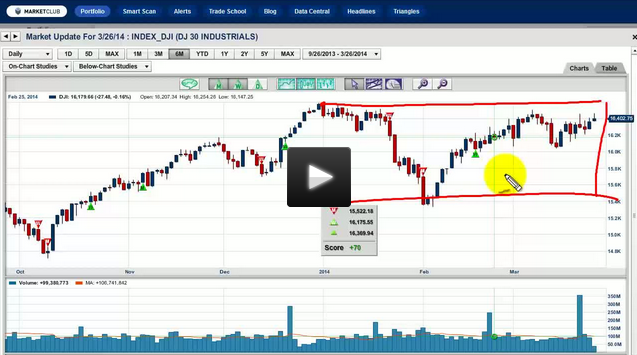 The other concern I have is the damage done to the NASDAQ earlier this week as it fell to a 6-week low. How this particular index closes on Friday is going to be very important in my mind. Again, I will be watching this market very closely for signs of either a continuation of the bullish trend or a top. END_OF_DOCUMENT_TOKEN_TO_BE_REPLACED

Hello traders everywhere! Adam Hewison here, President of INO.com and co-creator of MarketClub, with your video update for Tuesday, the 11th of March.

The Dow Is Balanced

Looking at the Dow Jones Industrial Average (INDEX:DJI), you have half of the stocks in a bull trend and the other half in a bear trend, giving a very mixed picture and somewhat neutral look to the Dow 30. The question is, which side is going to win out, the bulls or the bears? As with any market, I will be watching the Trade Triangles for an indication of this index's next move. 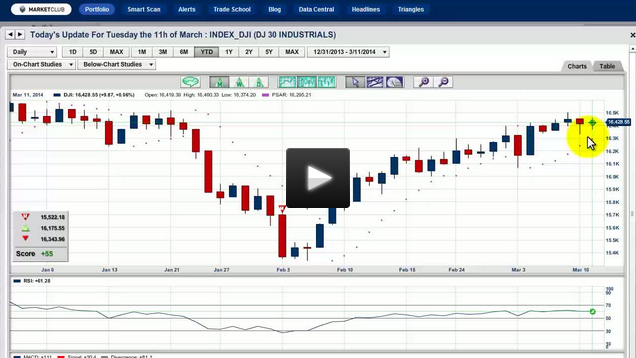 After rallying over $150 from the lows that were seen in late December, the gold market has gone into a sideways pattern as it begins to readjust to its new trading levels of $1,320 to $1,360. At the moment, it would look like short-term traders should be out of this market and that long-term traders could hold on to long gold positions. I'm still see the Gold (FOREX:XAUUSDO) moving higher longer-term. END_OF_DOCUMENT_TOKEN_TO_BE_REPLACED