Hello traders and MarketClub members everywhere! Today, I will be looking at Tesla (NASDAQ:TSLA), who just announced their earnings and future growth prospects and Alibaba (NYSE:BABA), who just made new highs yesterday, since going public in its recent IPO offering. I will also be delving into Amazon (NASDAQ:AMZN) and analyzing if the love affair is over.

Alibaba Group Holding Limited (NYSE:BABA)
Alibaba is an amazing company, started by Jack Ma not that long ago. Its recent IPO on the NYSE raised a record amount of funds for this company and made Jack Ma an overnight billionaire. So what does Alibaba actually do? This company acts and provides a platform to merchants to sell to their half a billion users that frequent their website. Alibaba's master plan is to be the biggest commerce website in the world. That leads me to another website that has similar plans. 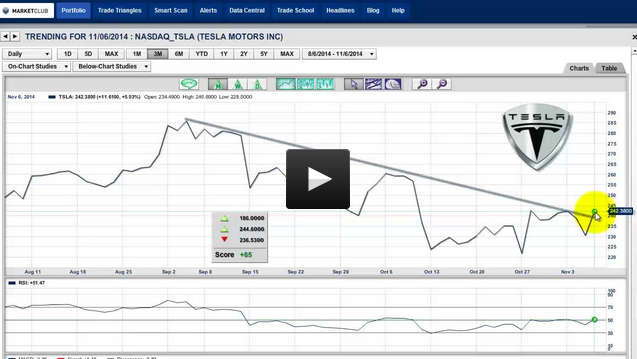 Amazon.com, Inc. (NASDAQ:AMZN)
Amazon, who is undoubtedly the king of online commerce here in the United States, continues to grow, but continues to lose money. Amazon continues to pour money into the development of several other businesses, including cloud and server hosting for companies. Amazon's greatest asset, in my opinion, is the amount of information they have on everyone who has ever purchased goods and services from their website. This is an invaluable resource for marketing, not just for Amazon, but for any company they choose to work with. END_OF_DOCUMENT_TOKEN_TO_BE_REPLACED

The Mining Report: Australian mining shares had a great July. Was that a one-off or indicative of a trend?

Luke Smith: July tends to be good because the fiscal year-end for most personal investors in Australia is June 30, so there is tax-loss selling up to that date. That said, this July was better than average. The gains slowed down at the end of the month, but we've seen a liftoff again from the middle of August. Hopefully, this trend will continue, and we'll see the revival of Australia's small-resources sector.

TMR: Asian countries such as China and Indonesia are moving toward added-value mining. What implications does that have for Australian mining?

LS: Indonesia is a large supplier globally of tin, nickel and pig iron. The decrease in tin from there is counteracted to some degree by Myanmar becoming a tin producer overnight. The decrease of Indonesian nickel has already been positive for Australian nickel producers and explorers and the nickel price on the London Metals Exchange.

TMR: Newcrest Mining Ltd. (NCM:ASX), Australia's biggest gold miner, has suffered a lot of bad news lately, including a $2.5 billion ($2.5B) write-down and a class action suit. To what extent do its woes mirror that of Australia's gold industry as a whole? END_OF_DOCUMENT_TOKEN_TO_BE_REPLACED

Yesterday, Tesla Motors Inc. (NASDAQ:TSLA) flashed a buy signal at $229.78. This put all three Trade Triangles in a positive trend.

The RSI indicator moved over the 50 level, which is also another strong confirmation. I view that action as the continuation of a strong upward trend for Tesla. 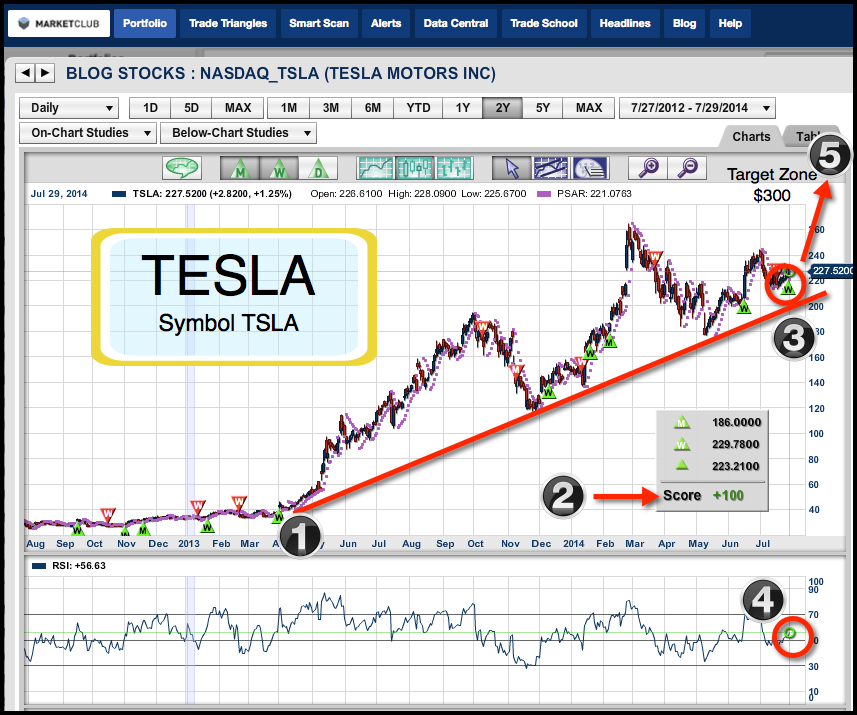 Technically, I can see Tesla Motors Inc. (NASDAQ:TSLA) moving to the $300 range. Look for near-term resistance around the $240 and $260 levels.

Japanese candlestick charts differ from Western charts as they are much more visual and descriptive than Western charts. Besides the more advanced formations on candlestick charts, they also have such interesting names like "hanging man," "hammer," "dark-cloud cover" and "morning doji star." I could go on, but I think you get the picture. The names of these formations are very colorful. END_OF_DOCUMENT_TOKEN_TO_BE_REPLACED

I am sure, like a lot of traders, you are paying close attention to what is going on in Iraq, Syria and Iran. My take on the situation is that it's not going to get better and the US is certainly not going to get involved in any meaningful way. This spells out doom for Baghdad, along with a bloody civil war which may have already started.

Against that backdrop, energy prices will continue to move higher and the possibility exists that the oil fields and processing plants in Iraq could be blown up just to put that country back in the Stone Age. We are dealing with a bloody sectarian war that is and will continue to tear that country apart. It also brings to mind what is going to happen to the rest of the Middle East? This whole Middle East problem has been going on for longer than anyone cares to remember and it's only going to be settled with a "bigger stick." At the moment, ISIS has the "bigger stick," the money, and the ferocious obsession of bringing their way of life to the area and surrounding areas. All in all it does not sound like too rosy a picture to me.

That got me thinking about who or what is going to benefit from much higher energy prices. One company stands out in my mind is Tesla Motors Inc. (NASDAQ:TSLA) You're probably familiar with their expensive sports car that sells for upwards of $100,000, but they're working hard on producing a lower-priced model, one for the masses. They are also planning the largest battery manufacturing plant in the world. 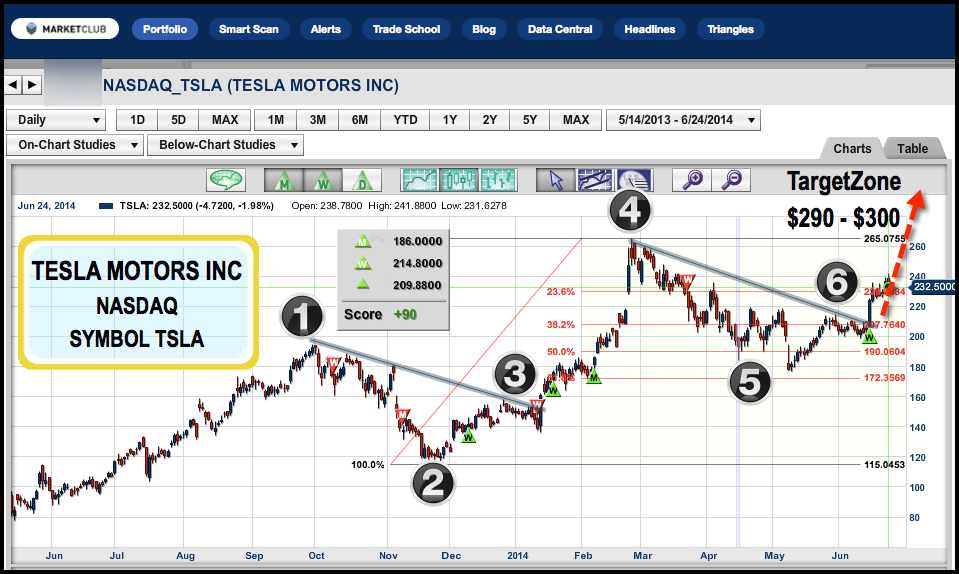 All of this is driven by one man, Elon Musk, who is the driving force and mastermind behind Tesla's domination of the electric market and SpaceX. END_OF_DOCUMENT_TOKEN_TO_BE_REPLACED