Now that Judy Shelton has passed the first big hurdle to be confirmed as a member of the Fed – passing muster with the Senate Banking Committee by a 13-12 party-line vote – let’s assume that the full Senate will confirm her. While it’s not a slam dunk, Republicans do control the chamber by a 53-47 majority, so even if Mitt Romney votes against her, as he says he will, she’s probably in.

Despite what her many detractors believe – that she has the power all by herself to return the U.S. to the gold standard and direct the Fed to do whatever President Trump wants – that probably won’t happen unless Fed chair Jerome Powell resigns or Trump figures out a way to remove him without triggering a massive global financial panic safely. Even then, it’s a fantasy. So Shelton is probably going to be confirmed, and nobody is going to die as a result.

So let’s turn instead to what a Fed under a President Biden might look like. Luckily, the former vice president has publicly revealed what he has in mind, in a short and concise 110-page press release entitled, “Combating the Climate Crisis and Pursuing Environmental Justice,” the product of a “unity task force” set up by Biden, and former presidential candidate Bernie Sanders, whom I guess wrote most of it. I’ll save you the trouble of pouring through it unless you’re feeling masochistic.

Granted, there’s only a little (fortunately) in the tome that deals with the Fed. Indeed, through the magic of word search, I found that there are only eight references to “Federal Reserve” in the document, but what’s there is enlightening about their thinking. No, there’s nothing in there about Fed monetary policy, I suppose to respect the Fed’s independence. END_OF_DOCUMENT_TOKEN_TO_BE_REPLACED

Will the confluence of abating political uncertainty, proposed self-regulation on drug price increases, potential merger and acquisition activity and chronically depressed valuations bode well for IBB in 2017? The biotech cohort saw a very tumultuous 2016 to say the least as the political backdrop, drug pricing debate and presidential election took the headlines. Biotech stocks responded erratically to any news that would have a perceived impact on the cohort during this timeframe. Since Donald Trump voiced his concerns over drug pricing, the initial rally in biotech has largely eroded to pre-election levels. The iShares Biotechnology Index ETF (NASDAQ:IBB) traded in a wide range throughout 2016 with pronounced volatility throughout the presidential election cycle registering a range of ~$240 to $344 or a 104-point range (Figure 1). The upcoming 2017 year is shaping up to be an eventful one with continued uncertainty about the political climate, governmental stance on mergers and acquisitions and potential deregulation. Another hot button issue will be the potential restructuring of the Affordable Care Act and proposed favorable tax and repatriation rates. END_OF_DOCUMENT_TOKEN_TO_BE_REPLACED 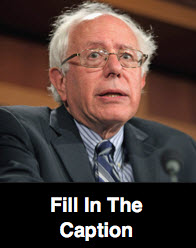 What do you think would be the "perfect caption" for this photograph of Senator Bernie Sanders?

Here's mine: "Why do you keep saying Hillary is going to win"?

Feel free to leave your caption, but please keep them above board.

For a good chuckle, be sure to read some of the captions from previous Fill In The Caption pictures.