Platinum fell in a downtrend in 2011 after the price formed a reversal double top pattern, which was confirmed on the RSI. Price rapidly reached $1400/oz, scoring $445 for the bears. The market easily overcame 23.6% and 38.2% Fibonacci retracement levels, but was stopped in four consecutive attempts by a very hard 50% level at $1345/oz. The bulls didn't jump at their chance to break upside at the $1676 level after consolidation. Later this peak became the downtrend touch point. It could be classic ascending triangle pattern, but the market turned sideways shaping a rectangle formation instead.

You can see on the chart how accurately the RSI indicator shows real and false breaks on the market. In 2013, the RSI didn't break the 40 level support twice, while price moved below $1400 support twice. And the market reversed up inside of the rectangle.

This year, the price was squeezed between downtrend resistance and 38.2% Fibonacci retracement at the $1470 level on the upside and the rectangle's support at the $1400 level on the lower side. After impulse accumulated enough power, the market first tried testing the upside, but failed and in September moved down and cracked both the $1400 level rectangle support and the 50% Fibonacci retracement level, the last one only with the 5th attempt.

Platinum swiftly appeared at the 61.8% Fibonacci level at $1221/oz. The price managed to drop below it for a while, but the market closed higher at the $1224 level.

With the RSI at the bottom line, the market lost its impulse for a further move down. In 2008, after the RSI touched the 33 level, the market rocketed for an impressive $1000 gain. And it can be repeated this time. Optimistic target for bulls will be the $1900 level, the recent reaction high where the market stalled. Conservative target is at the $1700 level, the rectangle's upside.

On the upside, the former support at the $1345 level turned to be very tough resistance as it is also an important 50% Fibonacci level. Next is the $1400 level, where the downtrend line and rectangle's support cross.

Despite this bullish scenario, should the market manage to crack very good support at the $1078/oz level (January 2006 close and October 2006 close, marked by thin green line) we could fall deeper to the $820 level, which is the base of the cycle started in October 2008.

Amid bearish trends in most precious metals, palladium is moving confident in its firm multi-year uptrend. The price grew almost 400% in six years! It's soaring! 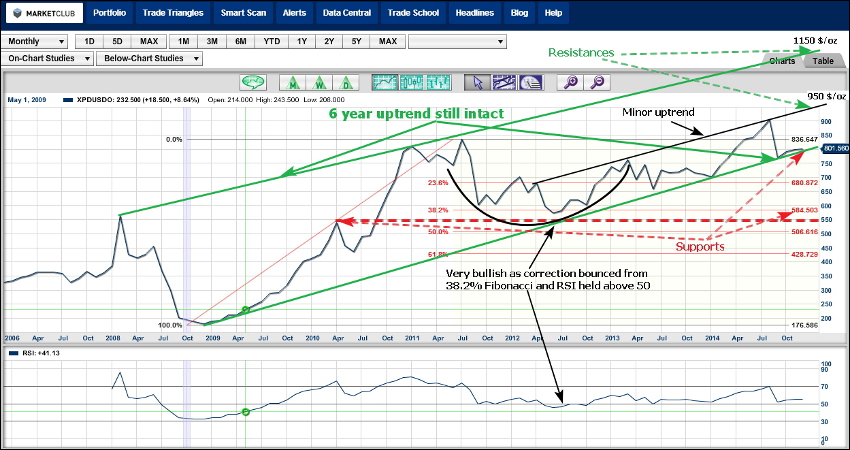 This metal sculpted a triple top pattern in 2010-2011 and retraced 38.2% from the peak to the $600 level, but then stalled there four times, showing that the market is very bullish and is not going to fall. The RSI also confirmed a bullish attitude, with the price being held above the crucial 50 level and it's still there.

In 2012, a minor uptrend inside of large bullish channel was established with support right below the current price at the $800 level. The RSI is relaxed and it's a good opportunity to buy here with a target at the minor trend's resistance at $950/oz and a more optimistic large channel target at $1150/oz. As we are close to a good support line, buying is safer and it is obeying the current trend.

This metal inspired me to add this analysis for a broader view. 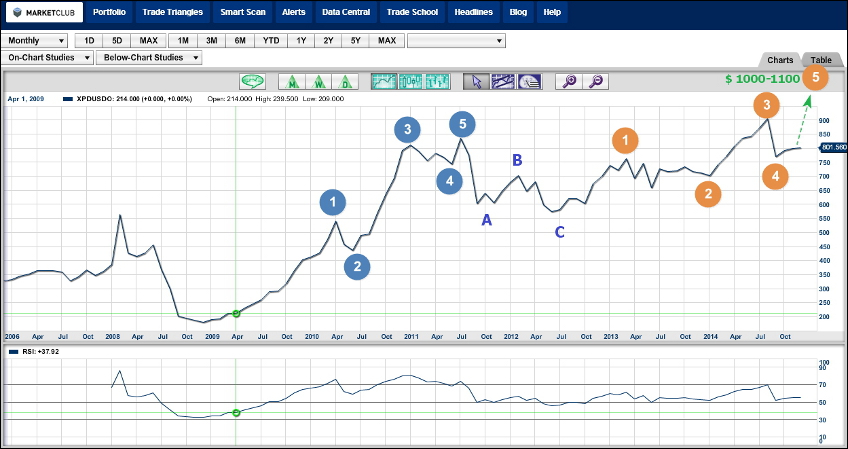 On the Elliot Wave chart, we can see that the price is now in a possible wave 5 with the target at the 1000-1100 level (which coincides with the previous chart target). This means that this cycle started in the middle of 2012 and is going to exhaust with the last impulse wave number 5. One can try to benefit from this seemingly obvious gain trade. It is worth noting that wave 4 was close to breaking below the peak of wave 1 and that would negate all of the wave model, but fortunately for the bulls it didn't happen and wave 5 is underway. Once the price falls below the 2013 high at $750/oz, you should be nimble to square longs as it will terminate the model.