The Immunotherapy space has ushered in a new class of therapies to combat a variety of diseases, most notably cancer. Immunotherapy has been emerging from the backdrop of oncology research for years most notably from smaller companies such as Dendreon, Kite Pharma and Juno Therapeutics as leaders in the space. Dendreon was first-to-market with its activated cellular therapy, Provenge® in 2010 followed by a 7-year gap until Novartis’ Kymriah® was approved in August of 2017 which was shortly followed up by the approval of Kite Pharma’s Yescata® in November of 2017.

Now, immunotherapy is at the forefront in oncology as a leading therapeutic which has been shown to cure cancer in previously untreatable patients. Immunotherapy ushers in a new class of promising therapies by harnessing the body’s immune system to recognize and eradicate debilitating diseases, specifically cancer. Immunotherapy has been shown to have a favorable side effect profile and best-in-class efficacy across many different disease states. These therapies may provide a powerful technology to contend with a host of diseases, and in a future state, may potentially serve as a preventative technology similar to a traditional vaccine. Immunotherapy has evolved into many different classifications with differing modalities over the past several years, which has given rise to a growing number mid and small-cap biotechnology companies. In late 2015, The Loncar Cancer Immunotherapy ETF (NASDAQ:CNCR) and provides investors with an opportunity to invest in this unique cohort.

Under normal immune functioning, white blood cells (dendritic cells, macrophages, and B-cells) will bind to the foreign invader via a unique protein on the cell surface that’s dissimilar to normal cells termed an antigen (foreign entity). These white blood cells release cellular signals that give rise to a cytotoxic attack on the cells it recognized as foreign via natural killer cells and IFN-α secretion. These white blood cells will also present fragments of this antigen to naïve T-cells (CD4 and CD8 T-cells). Once these T-cells are presented the antigen fragment, this induces a cellular cascade and gives rise to T-helper cells and cytotoxic T-cells. The T-helper cells secrete signals to activate B-cells to produce antibodies specific for the antigen target. B-cells will undergo clonal expansion to produce a cohort of monoclonal antibodies. The cytotoxic T-cells release cytotoxins that directly kill the foreign invader. Once the immune response has been established, memory T and B-cells along with antibody titer remain active in the system. The confluence of antigen presenting cells, T-cell activation and antibody generation will collectively eradicate disease burden.

As a result of the body’s inability to recognize and destroy these antigen targets via white blood cell recognition and subsequent antigen presentation, these antigens must be presented to the immune system exogenously like a traditional vaccine. Immunotherapy is geared towards the immune-tolerant host via exogenous delivery of the antigen to the extracted white blood cells such as the case with Provenge®. The Provenge® process extracts the white blood cells and activates the cells with the target antigen. Once the activated cells are infused back into the patient, these cells can now serve as antigen presenting cells and present the antigen fragments to the T-cells for the full immune cascade to unfold, described above.

Novartis’ Kymriah® and Kite’s Yescarta® employ the CAR-T technology which isolates the naïve T-cells (CD4 and CD8 T-cells) and directs the T-cells to recognize CD19 on the cell surface of the cancer cells. This is accomplished via engineering the T-cells by placing a CD19 receptor into the cell membrane of the T-cells (Figure 1). Once bound to its CD19 target, the immune cascade unfolds, and eradication of the cancer occurs in the case of acute lymphoblastic leukemia (ALL). 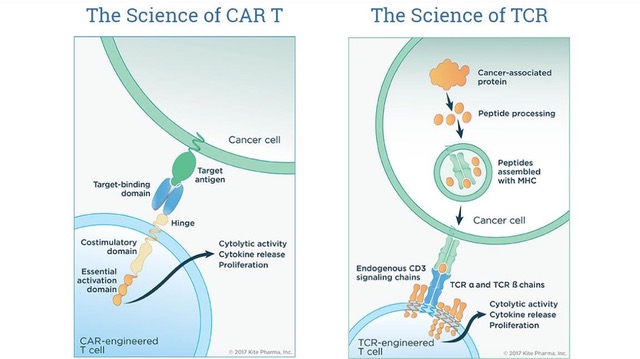 Figure 1 – The science behind CAR-T and TCR technology, the former directed towards a specific cell surface antigen target via gene transfer (i.e., CD19 gene) and the latter takes a T-cell receptor specific for a cancer antigen and introduces this receptor into other T-cells to enhance the immune response.

Immunotherapies have shown clinical efficacy in the oncology space with complete remissions in patients that were previously untreatable as well as non-responders. Dendreon’s Provenge® has been highly successful in terminal stage prostate cancer and part of an overall regime to achieve survival and in some cases remission. Todd Seals is one such patient, per his blog, “Well, it as been 10 years and 3 months, and 23 days since Stage-IV diagnosis and I am still here. Hormones worked for 5 years. Provenge gave me another 17 months, and I have been on Zytiga for these past 3 years. All in all, life is good.”

Kite Pharma recently provided an update to its Yescatra® therapy that was evaluated in clinical trials, and after a median follow-up of 15.4 months, 82% of patients continue to show a response and 58% of patients were in complete remission. These results are remarkable considering these patients are very sick and failed all previous lines of therapy. Kymriah® from Novartis is the first pediatric CAR-T cell therapy. Results show 83% of patients who received treatment with Kymriah® achieved complete remission. 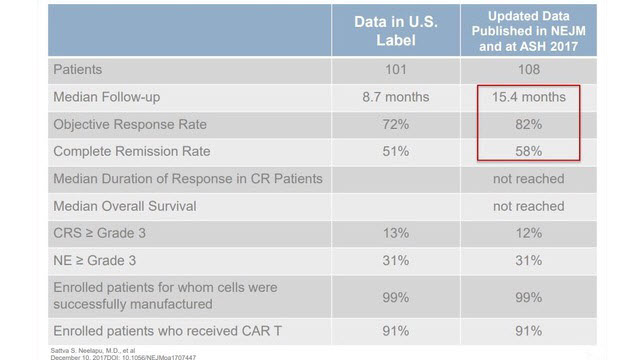 Acquisitions in the Immunotherapy Space

Dendreon, Kite Pharma, and Juno Therapeutics were trailblazers in first and second generation immunotherapies, gaining approval for Provenge®, Kymriah®, and Yescata®, respectively. All three companies were acquired with Dendreon suffering a tumultuous bankruptcy and delisting from the Nasdaq. Valeant emerged as a suitor that showed the most interest in this product and Dendreon’s intellectual property and acquired the company via bankruptcy court proceedings for $495 million. Valeant divested its Dendreon asset to a Chinese firm called Sanpower for roughly $1 billion and operates under its original name Dendreon as its own entity. Kite Pharma was recently acquired by Gilead Sciences (GILD) for $11.9 billion in an all-cash deal, and Juno Therapeutics was acquired by Celgene (CELG) for $9 billion buying the remaining shares that Celgene didn’t already have under ownership. As large-cap companies look to expand their pipelines and adopt this promising new frontier in oncology, many of the smaller players in the space could see the same fate of being acquired.

"The Loncar Cancer Immunotherapy ETF is made up of a basket of companies that develop therapies to treat cancer by harnessing the body's own immune system. Immunotherapy is a transformational field within the biotechnology space that may have a foundational impact on cancer care. By developing immunotherapies that are more effective and may deliver a better quality of life than currently available medicines, innovative immunotherapy companies may be making a difference for courageous patients who battle cancer."

The proof of concept and efficacy in immunotherapy has already been well established with favorable side effect profiles. The paradigm shift in oncology towards immunotherapy could lead to partnerships with big pharma and may result in potentially lucrative rewards for shareholders. This ETF offers exposure to the entire immunotherapy space.

The Immunotherapy space is opening up a new class of therapies for cancer treatment. Dendreon, Kite Pharma, and Juno Therapeutics were trailblazers in the space and have all since been acquired. Dendreon’s Provenge®, Novartis’ Kymriah®, and Kite Pharma’s Yescata® are providing more treatment options for cancer patients that have exhausted all treatment options. Immunotherapy is at the forefront in oncology as a future therapeutic which has been shown to cure cancer in previously untreatable patients. Immunotherapy ushers harness the body’s immune system to recognize and eradicate cancers. Immunotherapy has evolved into many different classifications with differing modalities over the past several years, which has given rise to a growing number mid and small-cap biotechnology companies. The Loncar Cancer Immunotherapy ETF (NASDAQ:CNCR) provides investors with an opportunity to invest in this unique cohort.