The market does not move in a straight line. I anticipated a correction to start in the U.S. dollar index (DXY) as it moved down too far without a break, and it came at the end of last week. Traders decided to book some profit ahead of a weekend, pushing the price of the dollar higher. 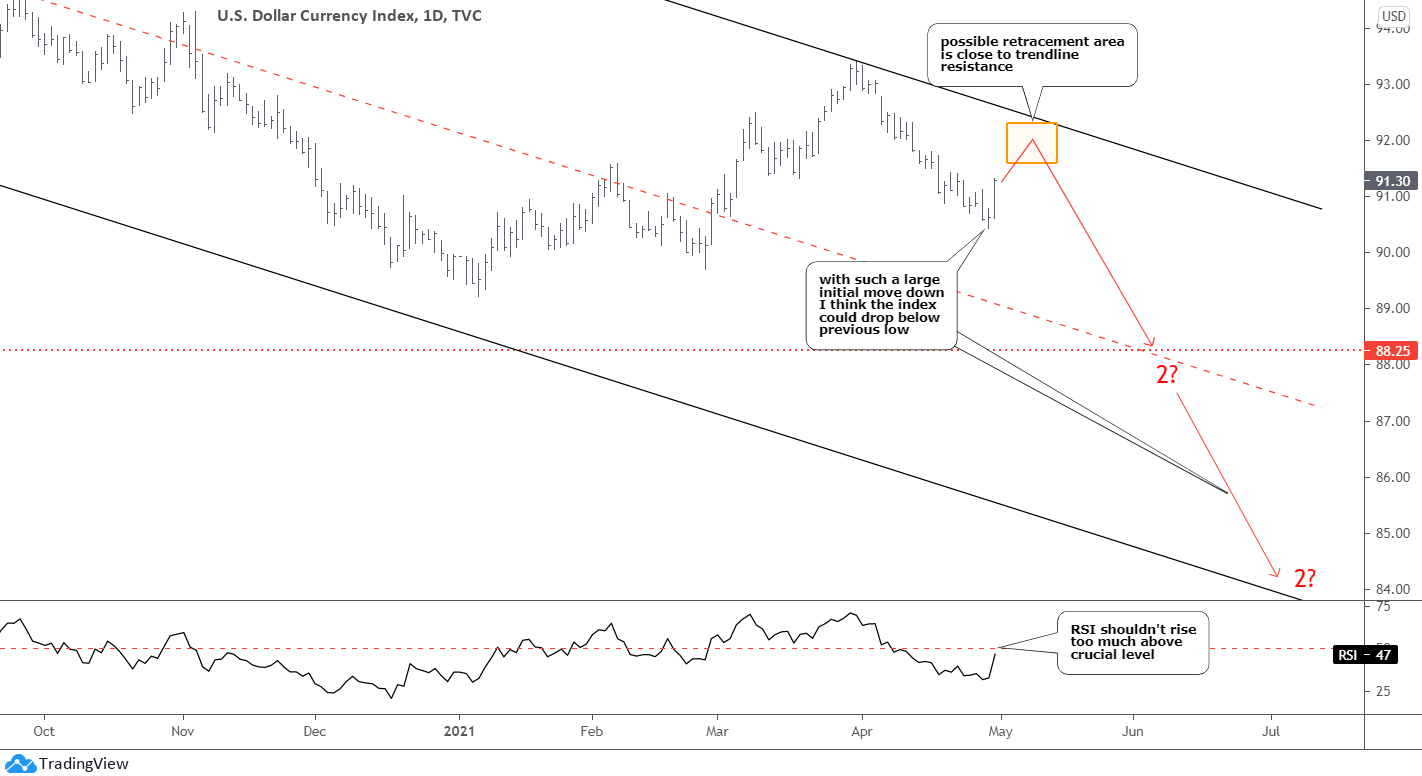 I highlighted the possible retracement area between 38.2% and 61.8% Fibonacci levels with the orange rectangle within the 91.60 - 92.30 range. The dollar nears the first resistance. The top of the rectangle is very close to the trendline resistance, making it a fortified barrier.

One should notice that this initial move down is excessively large. Usually, it is much shorter, and it looks like a zigzag with a smaller leg down followed by a correction of almost the same size. This could indicate that a deeper drop is ahead as the next move down could extend itself beyond the size of the first drop. Thus, the DXY could even hit the downside of the black downtrend channel around 84. It is much below the current target of 88.25.

The RSI also raised its head to the upside with the price. It should not rise too much above the 50 level, not to invalidate the current bearish view.

Gold has managed to break above the first resistance of the mid-channel. Now, it is in the minor pullback to retest the broken resistance. So far, so good, the price is still above that former barrier. 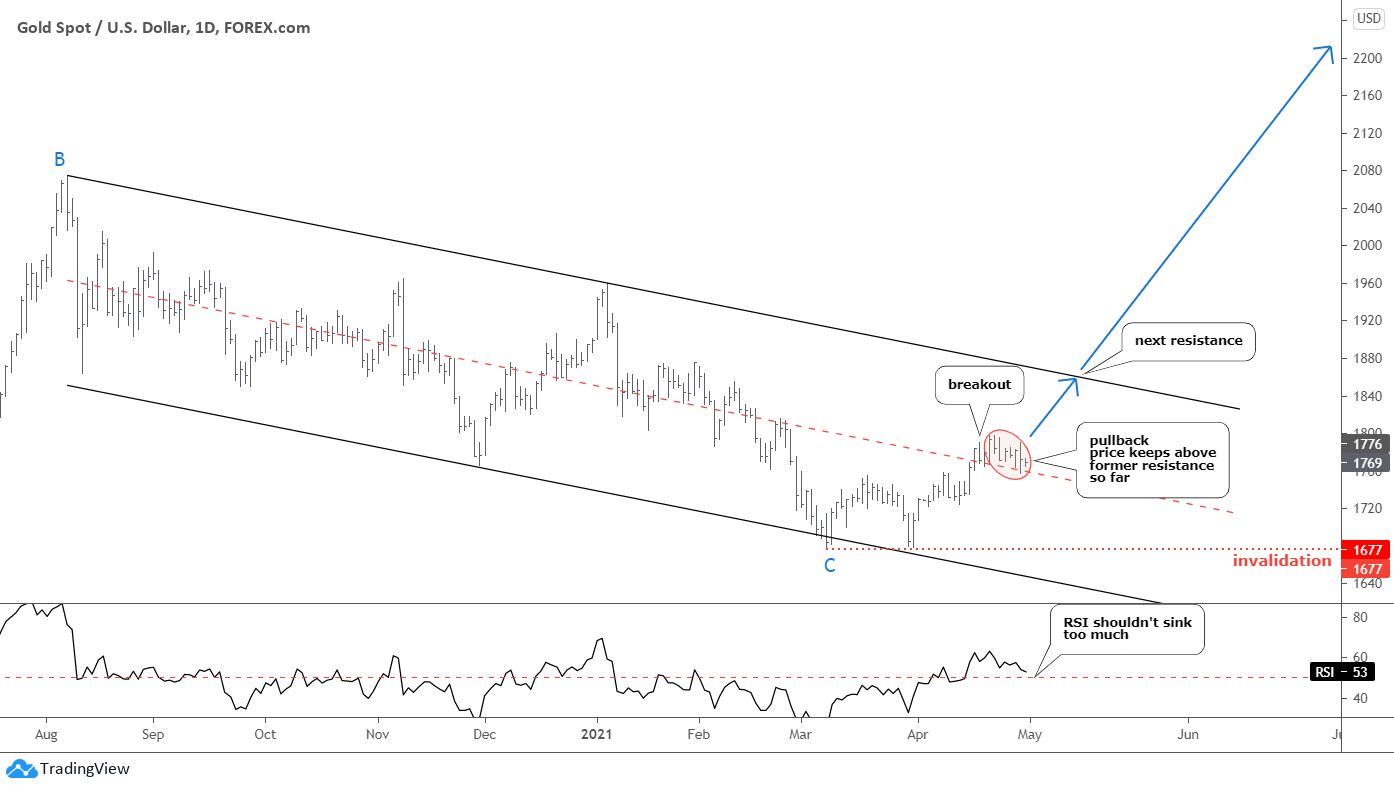 At this moment, the consolidation stage in the dollar index, gold and silver charts coincide. However, the room that metals have in their charts is not as big as in the DXY chart. Let us see if metals could survive at these levels and the pullback in the dollar index.

The RSI moves down towards the crucial 50 level. It should not sink too much below this level to support the price.

The next resistance is located on the upside of the black channel, around $1860.

Most of you have shown ultra-bullish views last time.

Silver quickly reached the confirmation level after it broke out of the Falling Wedge pattern (orange). The buying spree evaporated there, and the metal slid to the East within a sideways consolidation (red ellipse). 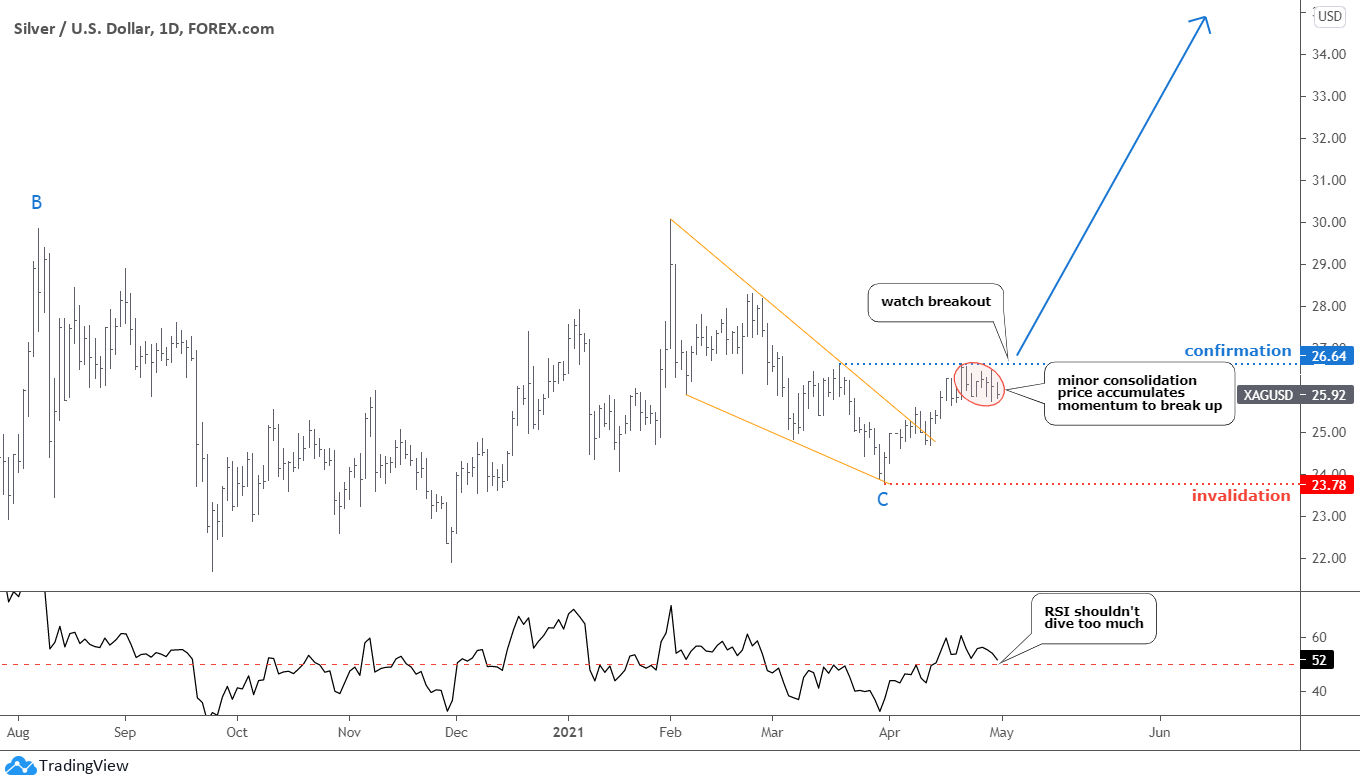 Watch the breakout above the trigger at $26.64 as the price of silver should gain enough momentum for it soon. So far, the good sign is the small size of this minor consolidation and a horizontal structure without sharp setbacks to the downside.

The RSI is sliding lower these days as it nears the crucial 50 level. It should not dive too much below the support to keep the bullish outlook.

The majority of you voted last time for the ultra-bullish target of $42 for silver.

6 thoughts on “Dollar, Gold And Silver: The Market Takes A Break”