Today Gold hit the $1300 level and I updated my chart for Gold, as it was price trigger for my previous bearish scenario.

In my first article last December I charted the line graph for Gold with a descending triangle pattern detected on this metal. My projection for the mentioned pattern was bearish with quite bold target levels.

What is up today?

The main rule for success is to not to be biased and always challenge yourself with making a brand new analysis from time to time, and surely when market is not going your way.

Today I prepared an absolutely new Gold graph to put fresh eye on it, now with candlesticks. 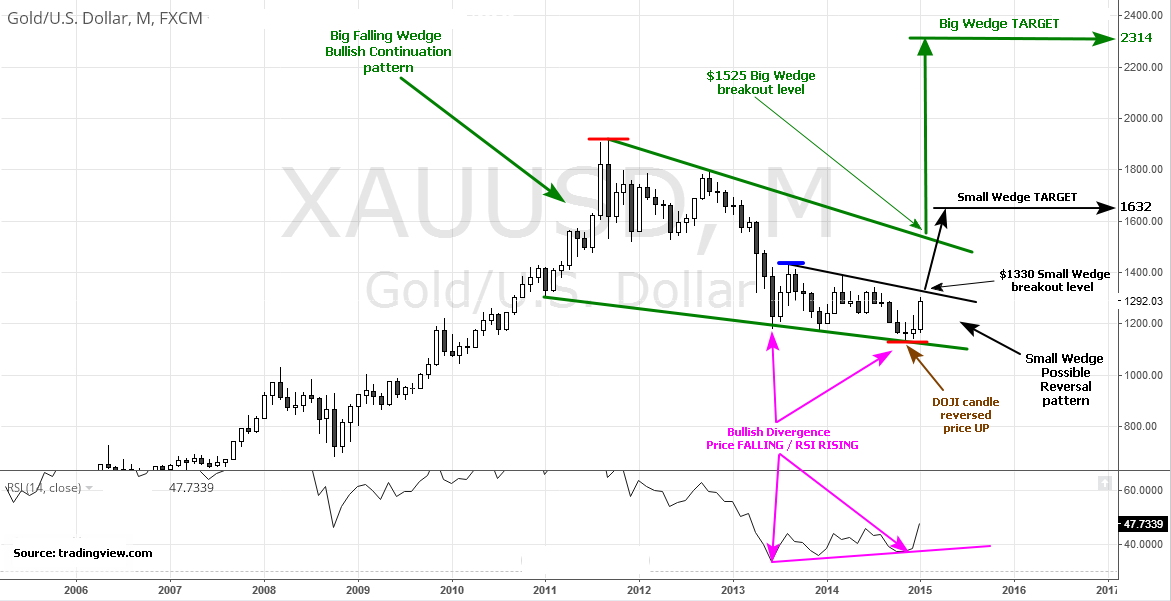 This time I detected a very interesting chart pattern called the “wedge.” This type of patterns is outstanding as it has an ambiguous impact on the market with either a continued or reversed outcome. Luckily, we have two wedges on the same time frame at once. Both are the falling wedge type because of the descending highs and lows. The big one is highlighted in green and the small is in black. Apart from it, we have two more rare technical species on the chart.

The purple has been identified as the bullish RSI divergence that was formed on the chart in 2013-2014. It means that the RSI is showing higher lows, while the price is on contrary charting lower lows. This opposite move is called a divergence. It is not a very strong indicator as it can last for longer time without any outcome. But it warns as a leading indicator about future changes in the trend. And it proved to be right as last November shaped a straight forward reversal candle called “Doji” (highlighted in brown). It’s my favorite candlestick being easy to detect and giving 100% predictable outcome. Doji is a candle with almost equal open and close levels. Both RSI divergence and Doji candle brought the market higher from $1167 up to current $1300 level. Nice move!

Let’s get back to our wedges! The small wedge could break lower as continuation pattern. Last November it failed with Doji candle being shaped. Now I assume it can play reverse mode as price approaches the upside. The target for the wedges are computed as follows: we should find the distance between opposite extremes of wedge and then add to (bullish) or subtract from (bearish) the breakout point.

Our small wedge has its highest peak at $1433 (highlighted in blue) and its lowest trough at $1131 (highlighted in red). The distance between them is $302. The breakout level is at $1330. Therefore, our projected target is $1330+$302 = $1632 (highlighted in black). This move will be sufficient to breakthrough the upside of the big wedge which is a notable sign. This impulse can generate higher market moves at bigger picture. 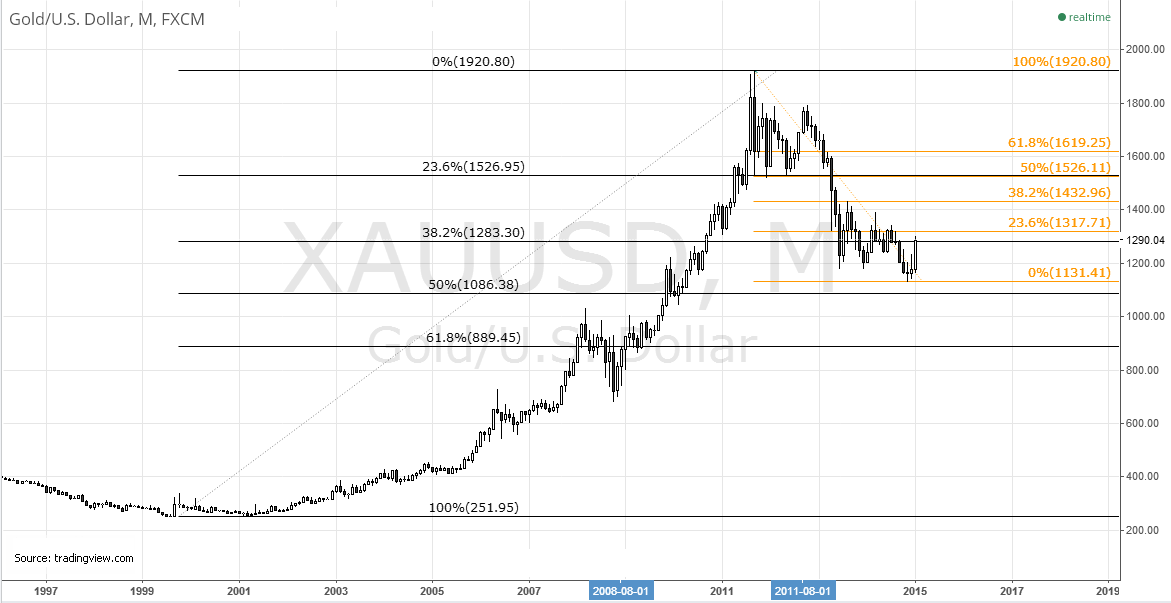 We have two Fibonacci retracements drawn on the chart above. Highlighted in black is the Big Bull Run from 1999-2001. Highlighted in orange is the current correction, or downward move started in 2011 (inverse). Gold lost almost half of its value during the correction. To confirm the bullish scenario, the price should close above the 38.2% Fibonacci level at $1283. The better move would be beyond 23.6%, the orange Fibonacci line, at $1317. The small wedge breakout is just above at $1330 and the current price is right between. It is notable that the 50% orange Fibonacci retracement level coincides with the 23.6% black Fibonacci at $1526. The big wedge breakout level is also there, which gives more power to this level. So, our small and big wedge levels coincide with the Fibonacci levels giving more points to our plan.

If the price fails to break upside, we need to watch the downside reaction law at $1131 and the 50% black Fibonacci level at $1086.