The prices of gold and silver remained between triggers last week as volatility left the market, and the “pulse” on the chart is hardly beating. It is time to challenge our bullish view, as it could be “too good to be true.”

Let us imagine if the market is building a more complex correction and another downward move is underway. I put that scenario in the alternative charts for gold and silver below. Before we jump in precious metals, I would like to share with you an updated US dollar index (DXY) 4-hour chart. 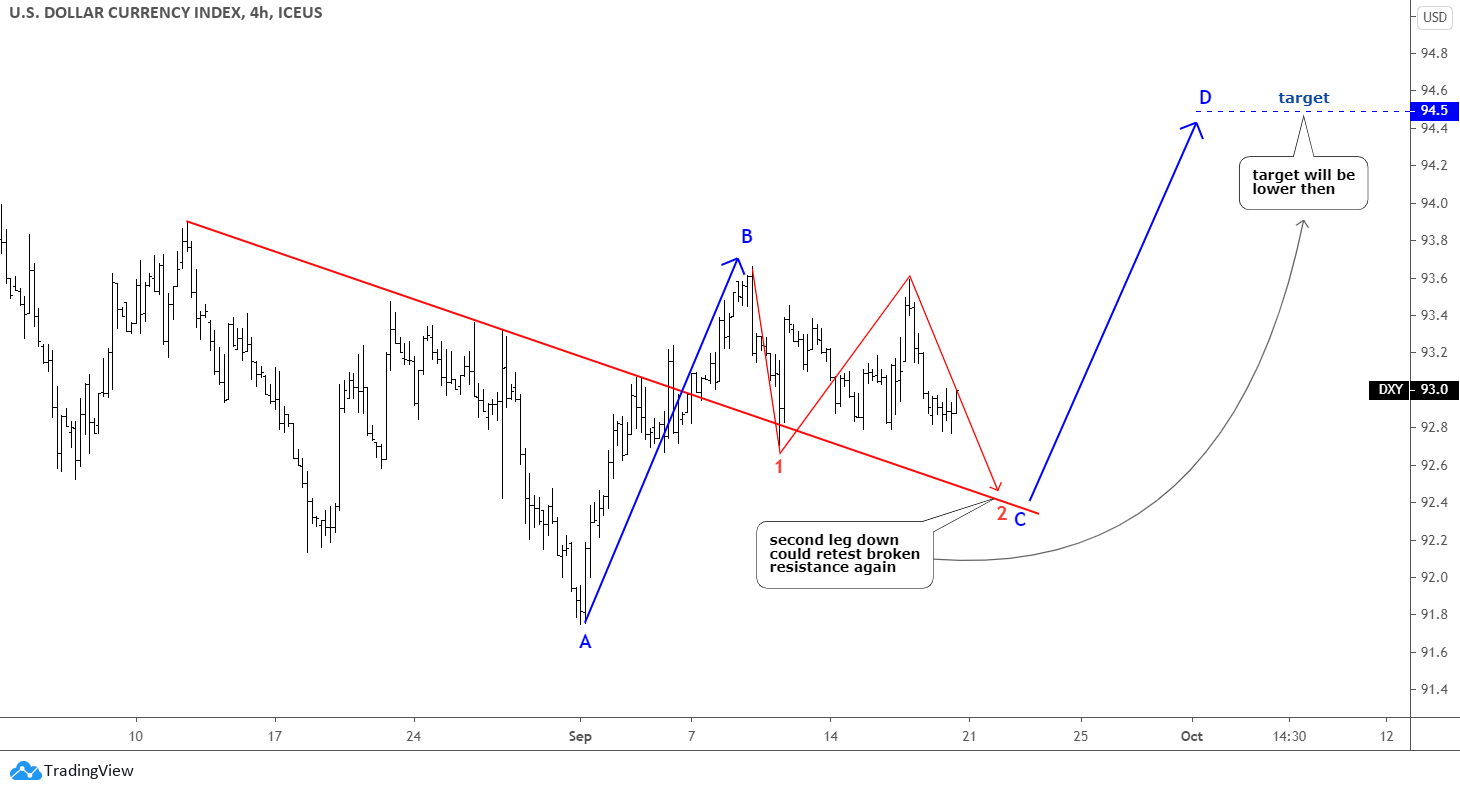 The DXY goes very well with my expectations as the outlined structure keeps intact, and we got a larger consolidation here with a second leg down underway. It could dip even lower to retest the former resistance again in 92.4 area. That will cut the target for the pending CD segment either to 94.5 from the earlier aim of 94.6.

It looks like the market still lives in uncertainty over the future as the consolidation extends further. Most of you voted the last time that the price of the metals could rise together with the dollar index. In the following precious metals charts, I will show the alternative structures that will go in line with the conventional “dollar up – metals down” concept.

We continue with the gold’s daily chart below. 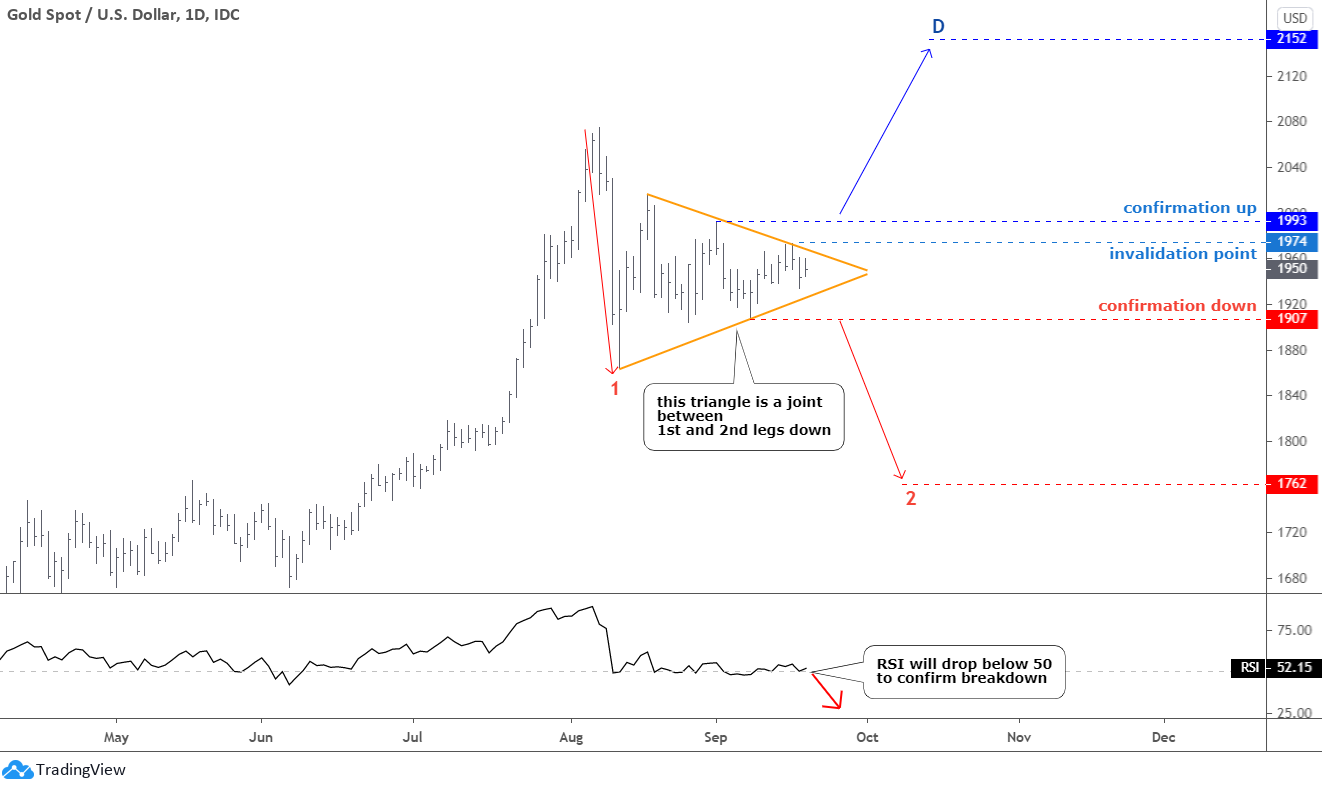 The market is neutral so far, and the RSI confirms it with the “dead man’s pulse” on the sub-chart. It neither breaks up nor moves down.

The alternative view here proposes the continuation of a complex correction to the downside. The first leg down was sharp, and now market “digests” that move as the crowd was punished for buying at the top and now new bulls could be demotivated to enter. They watch what will be the next step, leaking earlier wounds. The so-called “Perma bulls” are already in and afraid to add at these historically expensive levels. The market waits for a bigger bargain or for a fresh fear stimulus, which could be a major international conflict, some shocking event, or a fresh portion of printed money.

On the chart above, the alternative scenario shows another drop to attract bargain hunters who will join the uptrend on the dip to avoid the FOMO, which they experienced lately when gold hit a new record high.

We have a Triangle pattern (orange), and we have detected such a pattern with the bullish scenario before, but this time it acts as a joint between the first and the second legs down. The target for the second drop is at $1762 at an equal distance, with the first move down. The minimum target should be the valley of the first leg at $1863.

Triggers are set at the former troughs and peaks. We will get the confirmation of the move down below $1907 – the termination of a bullish Triangle pattern is also here. It is not so close to the market. The invalidation point is much closer at $1974. The bullish confirmation is beyond $1993. The RSI should drop below 50 to confirm the second leg down.

The silver’s daily chart is next. 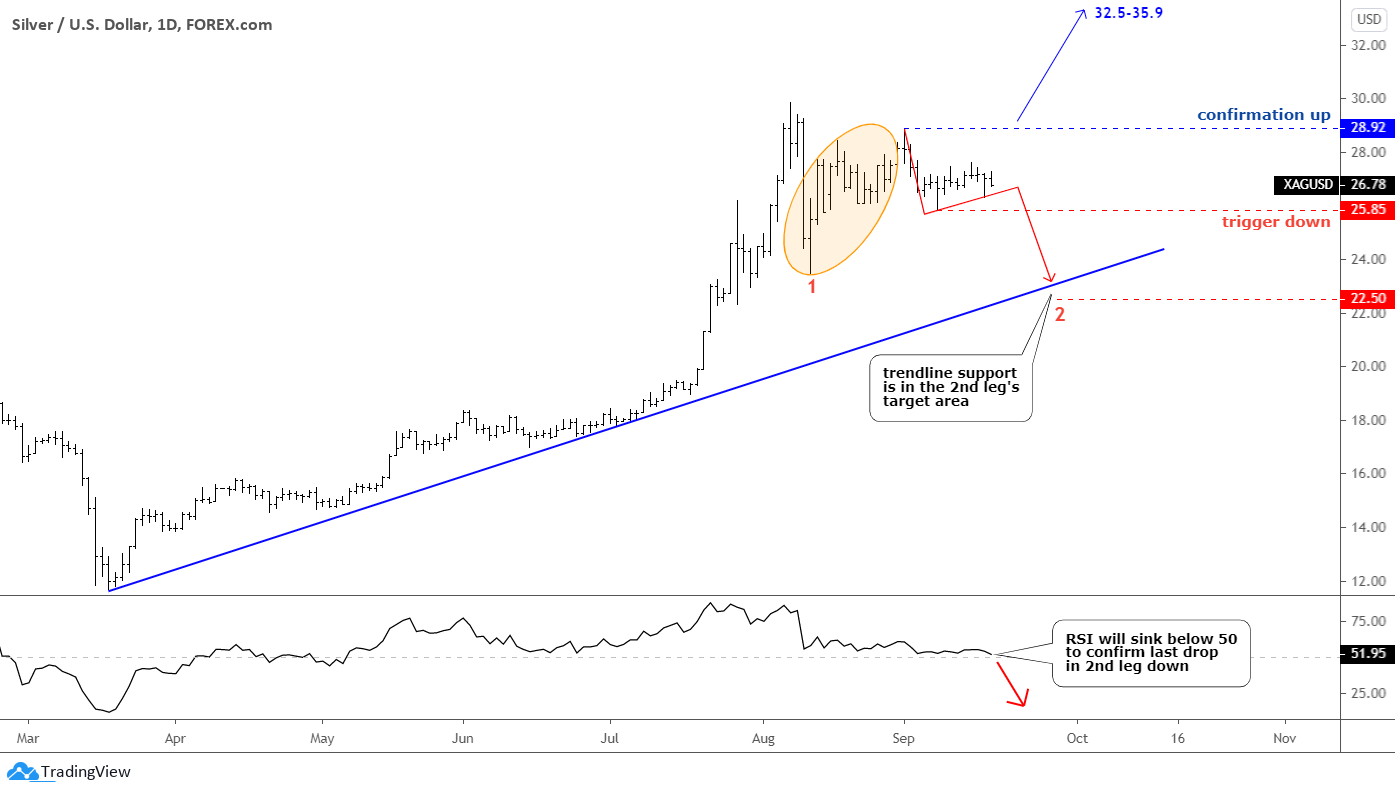 Silver has already pierced and closed below the bullish Pennant pattern posted before, and it is close to invalidation if the price does not get back inside of the pattern. But it does not cancel the possible bullish move, as consolidation just does not fit within any particular pattern. We should always keep to the mantra: “Only the market is always right!”

Let us get down to the alternative view. The joint between the first and the second legs down is not as beautiful as we got one on the gold chart. I highlighted it with an orange ellipse, it finished at $28.92, and then the second leg could have started. It consists of two minor parts as we could have finished the first one down and the minor consolidation in between.

The whole structure will be less sharp as the target for the second leg is at 22.50, where it will reach an equal distance with the leg one. In the same area around $23 notch, there is a contact point with blue trendline support. Let us see the reaction of the market there. The price should tag the valley of the first leg at $23.44 at a minimum. The upside trigger (downside invalidation) is still the same at $28.92; it will open a way for earlier posted bullish targets of $32.50-35.90.