Three weeks ago, I shared the chart of the U.S. Dollar Index (DX) with a bullish outlook.

You supported the idea with the most votes given to the conservative target of $103 located at the peak of Y2020. Your winning vote played out last Wednesday, the 27th of April. Kudos to all of you.

It is time to dust off the big chart again to update on further prospects.

The green triangular scenario has been eliminated as the price surpassed the last year’s peak of $103. The least favored blue path is the primary plan now. I turned the blue arrow into a blue zigzag as the price could take a break after hitting the upside of the blue dotted trend channel around $114.

The next barrier (black) of the Neckline (Giant Double Bottom pattern) is located at $121. It is that very target I was calling for in the title of the previous post.

It is too early to talk about the plan in case the Neckline is broken, although we have no other large barriers beyond, except the all-time high at the peak of the distant 1985 of $164.7. It would be an ultra-optimistic target with the total dominance of the dollar across the globe.

I want to show you one chart below that could shed light on why the dollar could rise further.

There are three lines in the chart above that represent the U.S. interest rate (black), U.S. inflation rate YoY (red), and the U.S. real interest rate (blue). It starts from 1977, and for the considered period, the current real interest rate has the most negative reading of -8%. Thus, the Fed has been forced to admit that this raging inflation is not transitory, and it should respond appropriately to take the rising prices under control. This week, the market expects a 50 basis point hike from the Fed; this would double the interest rate to 1.00%.

If we take history as a sample, the Fed could take the interest rate much higher beyond the most hawkish expectations. The simple calculation shows that the Fed rate topped at the ratio of 1.35 to the peak inflation rate (20/14.8). Applying this math to the current situation, we should multiply 1.35 by 8.5% of the inflation rate. Then the Fed should hike up to 11.5%, an unbelievable number! Although, it will not update the all-time high.

The time lag between the peaked inflation and the first hike was almost a half year in the past. This time, the Fed took the first step almost immediately if we take the March inflation reading as the peak. It could change the size of the tightening, as the speed really matters.

The higher the real interest rate, the more attractive the currency is. The hawkish Fed could spur even stronger demand for the U.S. dollar.

I am eager to see your opinion in the comments below, as it has enriched our view many times before.

It turned out that the dollar weakness we observed in February was about to be over right after the earlier update. I thought we would see more downside for the DX in the area between 94.4 and 92.5 (Fibonacci retracement levels) before the rally resumes, and most readers supported that idea. However, the rally started immediately.

The inflationary pressure underpins the dollar, as the Fed has turned strongly hawkish on the interest rate and tapering. Let us check out the updated daily chart below.

In my previous post, we saw the DX piercing down the dotted gray uptrend. Those punctures turned out to be false breaks, as fallouts of the channel were temporary, and the move up resumed overcoming above the preset confirmation level of 97.4. END_OF_DOCUMENT_TOKEN_TO_BE_REPLACED 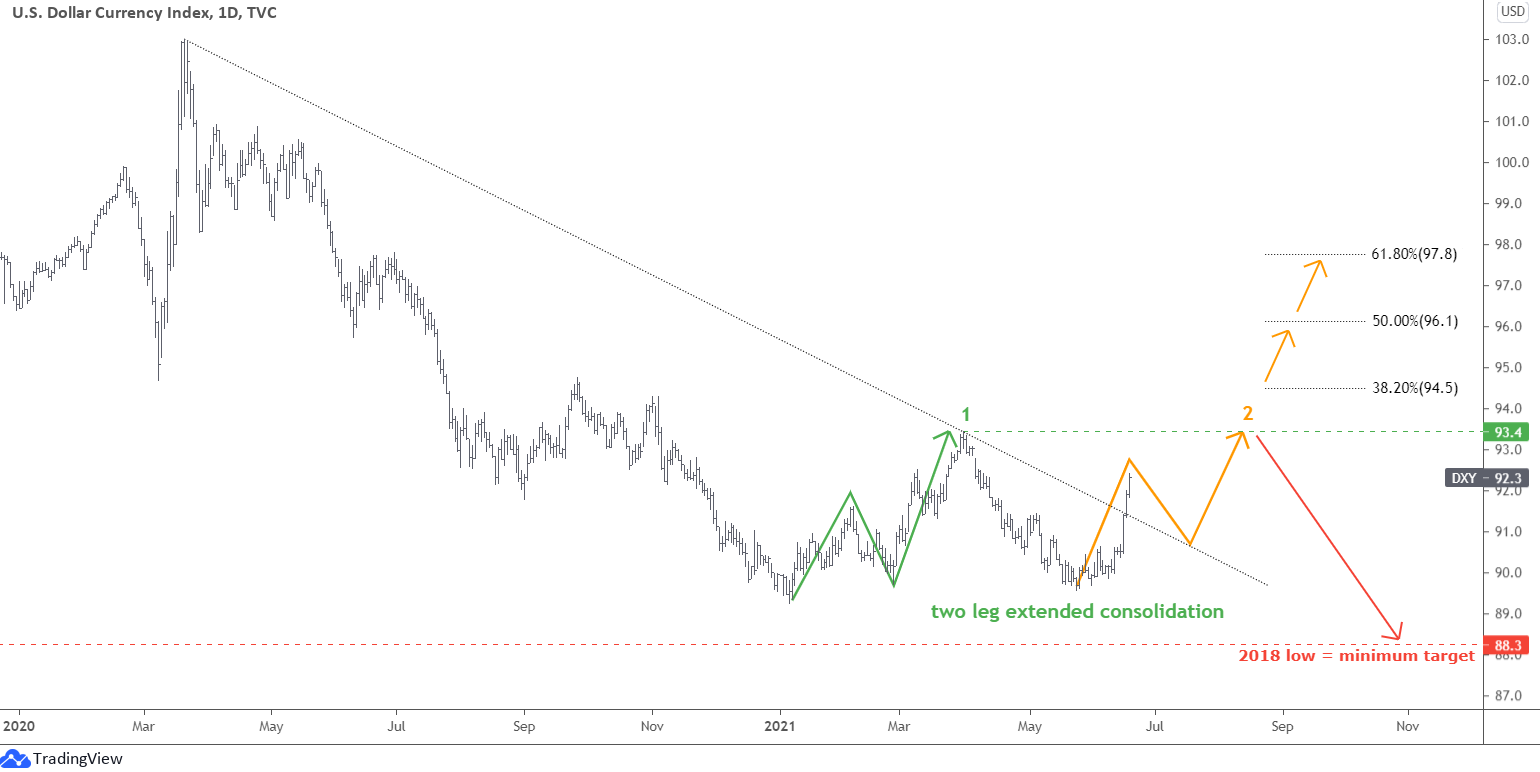 The market could build the second leg of this large consolidation marked with an orange color. I highlighted the last leg with a green zigzag to the upside. The current leg up could repeat the same two-movement structure, so I built the orange zigzag. The first move within a second leg up could be over. I expect the upcoming pullback to retest the broken trendline resistance. After that, the retracement could resume and hit the top of the first leg at 93.4. END_OF_DOCUMENT_TOKEN_TO_BE_REPLACED 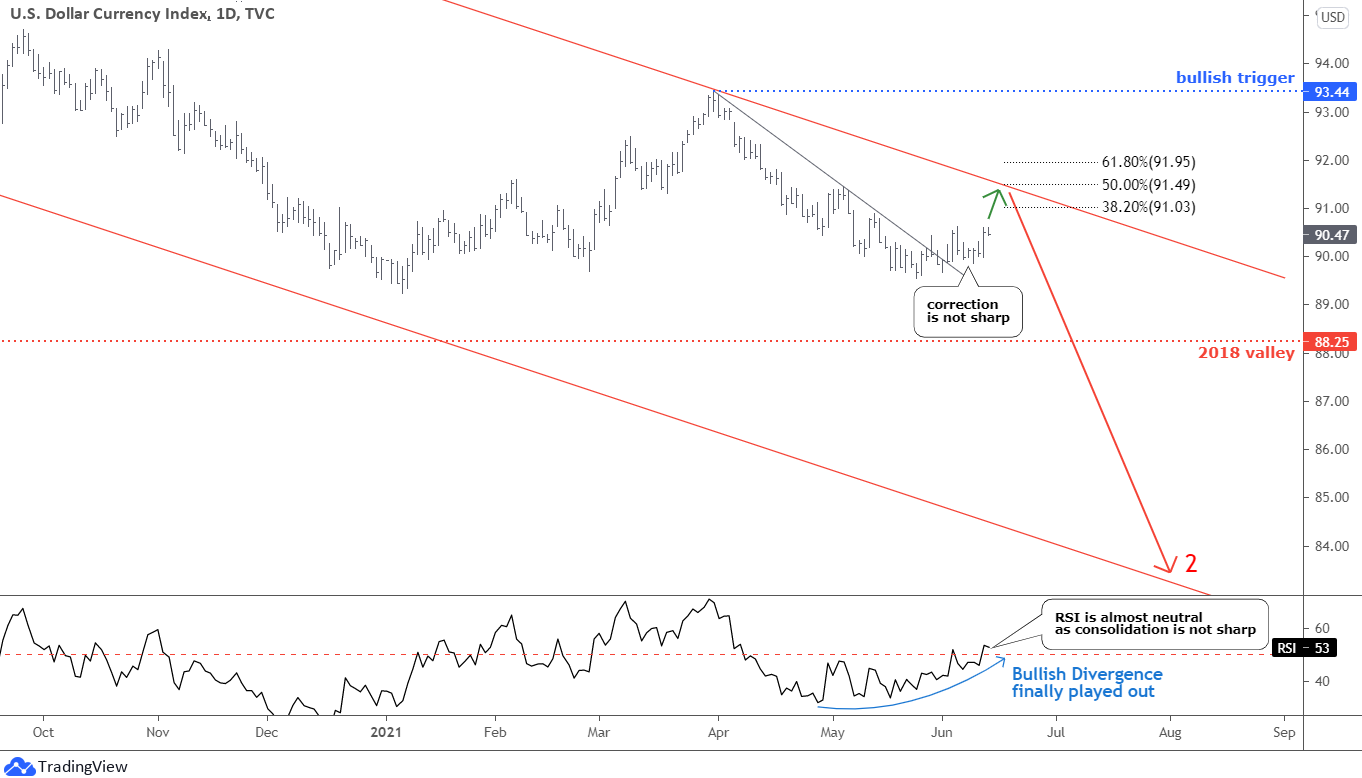 The confirmation came with the breakup of a gray resistance. The structure is not as sharp as I expected as the price is still below the Fibonacci retracement zone. All spikes are still around the initial breakout peak, around 90.5. END_OF_DOCUMENT_TOKEN_TO_BE_REPLACED